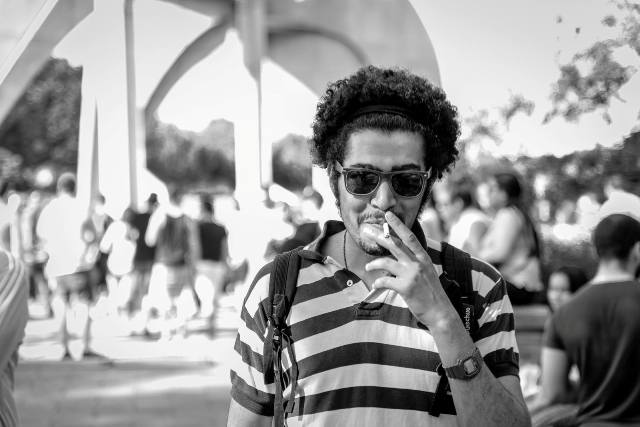 Sometimes it seems like people have entirely forgotten the allure that scratch had when hip hop records started to hit the mainstream. When you were a kid-not-from-NYC in the ’80s, it was like, the rhyming was cool, the rhythm was cool, the swearing and sex were a draw. But that real mystique came from the fact that there was a guy doing exactly what your parents and older siblings had told you not to goddamn do with their records for your entire life.

Then, as the life began to be juiced out of the culture, scratching just kinda went away, surfacing in smaller circles as an artform unto itself.

Montreal, with the dedication of turntablists who have continued to be able to pass the torch on, remains a stronghold for the craft, and this Sunday’s Piknic Électronik hands the second stage to two cats from France that came to Montreal with wax under their fingernails, needles up their sleeves and hella projects on the go. We spoke by email to get you a slice of their style.

Darcy MacDonald: Please introduce yourselves and tell us how you both ended up in Montreal.

Noyl: I’m Noyl. I was born and raised in Lyon, France, and I arrived in Montreal in 2009. I’ve been into DJing and turntablism for been almost 16 years, which means that I’m a young dinosaur of deejaying, I guess.

Famelik: I landed in Montreal in 2009. I still don’t know how it happened, but I kinda like it.

DM: Please, each of you explain how turntablism and scratching found you.

Noyl: (For me) everything really began with an older friend who had a set of turntables. He was already a scratcher, he used to play with the NTM‘s DJ and is one of the co-founders of the Scratch Bandit Crew. SBC is a scratch music band, an alternative to C2C or Birdy Nam Nam.

I was fascinated by scratching and this weird sonority. So I bought cheap turntables and started to destroy my parents and neighbours’ ears.

Famelik: Nearly 10 years ago, I came to live in Toulouse and I wanted to experiment making sounds meant to be manipulated with turntables. Artists such as Kentaro, Cut Chemist, Craze and Klever were really inspiring to me.

Problem: I did not know any scratch DJs in town, so I started to connect with people online and ended up on forums such as Beat4Battle.

Later, I met some mad turntablists in Toulouse, people such as Shini, Vega, Gnole, Sick, Nux, Zen, Tchoupz, Start; people from different ages, influences and backgrounds who were used to setting up regular community scratch sessions in Toulouse. I joined the family, made many friends and learned a lot.

Now, I try to push turntablism wherever I can, connecting people through events, battles, or any (scratch) session.

DM: And how did you guys connect?

Famelik: “It started as a rave, it ended in a riot.” We met at the Piknic 5 years ago. That’s funny.

Noyl: It’s a funny story. At that time, Famelik organized beatmaker battles on Beat4Battle. A friend from Lyon told me about this guy who had just moved to MTL. We added each other on Facebook but had never actually met. Our profile pics were way too dark and our faces were not really visible. Yet, one day, at Piknic for  Amon Tobin’s DJ set in the middle of the crowd, our path crossed and we managed to recognize each other.

DM: Do you have any strong opinions about where turntablism stands and where you’d like to see it go?

That’s what turntablism is all about. It’s meant to loop again and again, so all that’s left to us is to jam, practice, teach, look forward. And backwards.

Noyl: Few people are interested in scratch music and turntablism, especially in Canada, which is pretty sad ‘cause in Europe, the scratch competitions and scratch DJs are very popular.

I won’t say that no one gives a fuck, people can become actually crazy when you scratch on fast BPM tracks. But it’s a fact that we’re in 2014 and DJs play with controllers and it’s harder to find technical DJs. Hopefully, the scratch community is very active and imaginative. We’ll always find a way survive.

DM: Are you avid Pikniceurs? If so, what are some of your favourite sets you have seen there?

Famelik: At Piknic, for me it’s more a question of favourite sets I’ve missed. The Planet Breaks B-day on the second stage last month was good: right set and right mood combo.

Noyl: I try to go there at least three times a year. The second stage is becoming huge and is a perfect alternative if you want to hear something different. It’s still the best spot to have a good Sunday. Even if you don’t like the music, you can just chill there. The crowd is really receptive and the place is magic.

But, that Amon Tobin set, ‘cause that’s where we met. Or, in 2009, the first Piknic of the season. It was my first Piknic and Mr. Scruff was playing. The set was very eclectic, something between soul, jazz and hip hop.

DM: You are billed on the second stage this Sunday as representing Unlog. What is Unlog?

Famelik: In 2009, I wanted to start a “music-I-like-and-did-not-make-myself” blog, but the task was too big for me alone. So I invited friends from different countries to take part, and it became Unlog.

Later, we started to host podcasts, made a bigger website, invited more people to take part in the project and started to make our own compilations out of unreleased works from the artists we like.

We’re currently working on our fifth edition.  Noyl and I are part of the Montreal crew, and so are many artists we’ve featured in our compilations, such as Engone Endong, Archibald Singleton, M. Robin, Tehu, Mathew Ferness and many more.

DM: What can we expect at Piknic this Sunday?

Famelik: My B-day jam. We have 4 hours to push the music we love to hear, the artists we’ve been working with for the last 4 years and blend it with our own tastes as DJs. Basically, all school, dancefloor experiments, glitch, broken house, jungle, and many unshazamable stuff.

Noyl: On the Unlog stage, we’ll try to play music that is represented by our website. It could be 8-Bit abstract hip-hop to trap or drum n bass. Probably a little bit more house-y than usual ‘cause it’s Piknic. Of course, we’ll scratch, too, to show that we know how to use turntables.

DM: Please tell us about the Scratchmobile.

The Scratchmobile is an autonomous scratch set-up on wheels that can virtually go anywhere. Darcy built it as heavy as he possibly could, yet its main purpose is to allow the fellow-scratcher to leave his dark basement and perform scratch in unusual contexts: on top of the Mont Royal,  wearing a tuxedo in the streets and drinking champagne, or extreme situations like snow storms.

Keep your eyes open, we’re back to the streets sometime this summer.

Noyl: It’s a movable turntable on wheels with a speaker which is plugged on car battery. The stuff is pure craziness. We tried to scratch in the Montreal street regularly, we’ve already done it on the top of the Mountain, in parks, on St Laurent. That year gonna be the next level, we got few surprises for this season. A clue: Fisherman.

DM: What projects are you working on and do either of you upcoming events after Sunday you’d like to mention?

Famelik: I have recently released a project called Patterns on Blackelk Recordings (France), and I’m now focused on future releases, collaborations and sound design on artistic projects. No gigs announced for now though.

Noyl: I got an upcoming set for Complètement Cirque on Wednesday night with Mescal, the DJ and promoter for the Electro Swing parties. And I recorded scratches for the next (hip hop/jazz producer) Roger Molls project, which will be released in October, I believe. ■