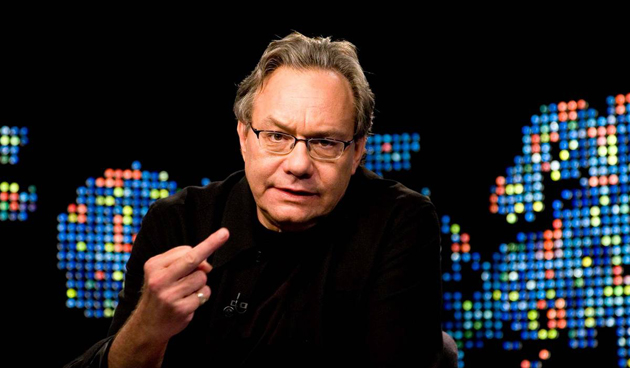 If you’ve never let Lewis Black yell at you from your TV screen late at night, from his Back in Black pulpit on The Daily Show, or watch him writhe in comedic agony over the stupidity of mankind in one of his many live specials…well, shit, I have no idea what you’ve been laughing at, and we probably wouldn’t get along.

Lewis Black brings The Rant Is Due show to JFL this Tuesday and Wednesday, and since my 10-minute chat with the gravel-throated, 66-year-old comic, social critic and ACLU ambassador for voters’ rights late last week, I’ve found myself being a little more blunt with everything and everyone. Black’s brand of wisdom is infectious, and as I prepared to speak to him with less than a day’s notice, I realized how little I actually knew about the man behind the over-the-top indignation.

I found myself transfixed by this video of his speech to the Nation Press Club this past April, wherein Lewis Black recounts growing up as a member of America’s last true middle class. His parents, in their 90s, sit front row as their infamously brash boy takes a slightly softer tone for a moment and discusses a happy childhood.

In a particularly poignant point during the speech, Black describes his mother, a supply teacher at his high school, as hilariously funny and prone to loud outbursts about the headlines. His father, meanwhile, was an engineer for the Department of Defense.

Black’s mom decided out the gate that the war in Vietnam was unjust. His dad told her she had no idea what she was talking about. He also understood that that didn’t necessarily make her wrong.

“One of the main reasons that we declared war (in Vietnam) was that the decision was made over something called the Gulf of Tonkin Resolution, (which) was based on the Geneva Accords,” Black says.

“Do you know anyone, anywhere, who (has done that)?”

“And he sat down and read ‘em! And he finished it, and he announced that there was no legal basis for us to be in Vietnam. And so he took an anti-war stance, as did my mother.”

Black’s success in putting a comedic spin on loud indignation is not something any ol’ angry asshole can pull off. It takes deep roots and true patriotism.  Lewis Black is an American original. And, truth be told, a sweetheart.

Darcy MacDonald: I have to tell you something. I’ve never interviewed a comic in my life. This opportunity came my way super last second. I’m a music journalist.
Lewis Black: Well, then you’ll probably be brilliant at it. You still have some sort of interest.

DM: Lewis, what was the first sense of injustice you remember feeling when you were a kid?
LB: There were two really, and they were similar. One was that my mother would drive me down to where, you know…we had a housekeeper once a week from Washington. A black, African-American housekeeper. And she would come once a week and help my mother out, and my mother would drive her back occasionally, and would take me. And where I was living and where she was living, the difference – I mean she was living in what was essentially a slum. You know, and that stunned me. Because I thought everybody kinda lived the same, unless you had a few more bucks.

And then, there was an Edward R. Murrow documentary called Harvest of Shame. And that movie flipped me out. The people who would make your food weren’t allowed to live like, or really even given, what was minimal to an existence that was even an uncomfortable existence! They were keeping these people prisoner. I was utterly stunned, because it was the first time that my world had a rip go through it, you know? The bubble was burst.

DM: So the show that you’re doing here is called The Rant Is Due. Is it a new show?
LB: I’ve always been doing ever-evolving shows. It’s always about trying to get funnier about it, and clearer about it, and nail what it’s about.

DM: You ever been in the middle of something you’re saying on stage and have a totally new thought and be like “Holy fuck, I never thought of it this way, but…”?
LB: All the time. Because I don’t write my act. I write it on stage. Like right now, I just started talking about going to Europe, and some time I spent in Tahiti. So all of that is completely new. And I just start going with like, the first five things I think are funny about it. And then the next time I start to put a little more in about it. And then I go back over it, and put something else in.

But I do think in front of people. And the luck I think I have had as a comic is that people have seemed to give me a certain amount of latitude, and seem to not mind, like, watching me think on stage. Which is nuts.

DM: Has indignation itself become a brand in comedy because it taps into something we can all relate to? Or is it just the lowest common denominator for the quasi-informed?
LB: Well, I don’t know, but part of the reason anger and indignation work is because comedy is tension release. Indignation and anger create tension, and if you can find the joke, you can release the tension. So that’s probably the deal.

DM: I can’t talk to you without asking you about Rob Ford. What do you make of that nonsense?
LB: Well, it’s really, it was great to see. (laughter) Having spent years going up there and admiring you guys, where you at least, you seem to find leaders who know what they’re doing, this was spectacular. Being like, ‘Wow, we’re not the only fuck-ups!’

The thing I like about Rob Ford is that he doesn’t do anything, but there’s a better reason he’s not doing anything than my congress. My congress isn’t doing anything either, but they’re not nearly as funny or as interesting.

DM: If congress could just be like, ‘We’ve been smoking crack back here guys! Sorry!’
LB: Exactly! And then I’d be like, ‘Ah, okay! I get it!’ If they were just smoking crack, then they’re human, for Christ’s sake!

DM: Well, a bunch of Quebec’s old mayors are on actual trial for corruption, too, so your admiration for Canada will wane further. And our Prime Minister is still a piece of shit. But anyway, I see you have a Pixar flick coming out next year?
LB: Yeah! It’s called Inside Out and it’s remarkable. I’ve been lucky enough to be able to work on it. I mean, you know, that bullshit that people fuckin’ spew about movies or whatever, but this is really just like…even aside from being in it, being able to watch them create something.

You’re rarely able to watch the process of creation of art and the choices that are made. The only time you ever really see that is if you go to a museum and see, say, Hemingway’s first drafts, and the cross-outs and stuff. And it’s amazing.

And I get to play Anger! So it wasn’t hard.

DM: Are you an animal? Are you a vehicle? Can you even tell me?
LB: In this movie we are the emotions inside a 12-year-old girl’s head.

DM: The pitch is solid. So what else can we mention?
LB: I love going to Montreal. I love eating in Montreal, I love walking around in Montreal. You know, I always feel…I mean, I got to Europe this year, but it’s always good to get out of your country at least once a year. Otherwise you actually believe what your country is doing is right.

I’ll be back in Canada in the fall, in Toronto and around the area. And I hope to come back and do one more big sweep of Canada in the next three to four years.

DM: Any favourite restaurants or haunts in Montreal?
LB: Joe Beef. It’s phenomenal. The chefs there are great. And there’s a place we go to that I think is called Bocata, that is this little great restaurant in Old Montreal, with really great wine and charcuterie and the whole thing. It makes me weep to know I’ll be eating there on Wednesday or Thursday. ■

To read more about the latest in Comedy, please visit the Comedy section.