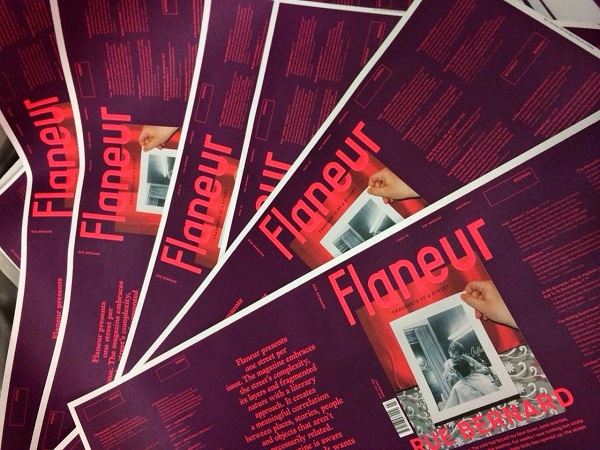 Back in April we let you know about the incredibly designed, biannual magazine Flaneur, which was formed in and is based out of Berlin. The publication stands out not only due to its beauty, paper stock and size but also due to its content — which is truly one of a kind. Each issue of the magazine is devoted to a single street in a city around the world. In their first issue, they explored Kantstrasse in Berlin, the second Georg-Schwarz-Strasse in Leipzig and for their third, they set up shop on Bernard, here in Montreal throughout the month of April.

During that time, founder Ricarda Messner, editors Grashina Gabelmann and Fabian Saul, as well as designers Johannes Conrad and Michelle Phillips, researched the history and explored every facet of our well-known Mile End street. They spoke to entrepreneurs, residents, chefs, artists and more in order to capture the spirit or essence of the area. The result is pretty impressive: a tome of over 100 pages devoted to the people and places that make Bernard one of our favourite streets in Montreal.

Without giving away too much — because the best part about flipping through the issue is discovering which of your favourites have been included (or not) — you can expect photos and detailed exploratory adventures down alleyways and fragments of the street; discussions on identity and language; stories from and about locals; a comic devoted to Montreal Roller Derby and some of their star players, and so much more. The issue gives a reader who lives in Montreal the opportunity to view the city somewhat objectively and to see an “outsider’s” perspective. And for anyone who is not a resident of Montreal, it offers an interesting window into the city and its inhabitants. ■