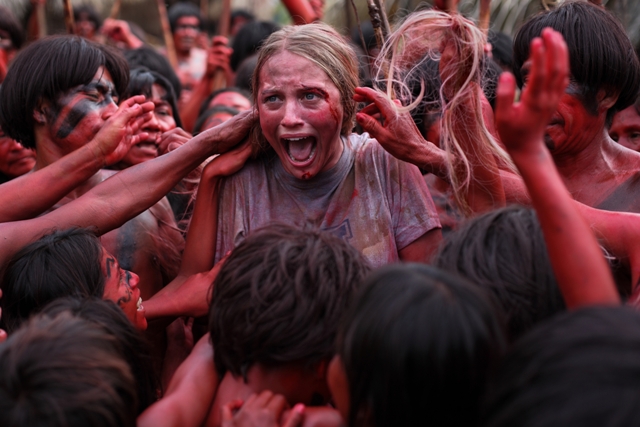 Anticipated films showing at the fest include the North American premiere of the latest installment in the anime series Appleseed, Appleseed Alpha; Cold in July, an adaptation of a Joe R. Lansdale novel directed by Jim Mickle (We Are What We Are) with Michael C. Hall and Don Johnson; Dead Snow: Red vs. Dead, the sequel to the cult Nazi zombie flick; Goal of the Dead, a 140-minute movie about zombie soccer players (!); The Green Inferno, the anticipated new cannibal film from Eli Roth (Hostel) and The Mole Song – Undercover Agent Reiji, a new cops-and-yakuza action film from the incredibly prolific Takashi Miike.

Local films are once again well represented. Features DYS– (directed by Fantasia regular Maude Michaud, making her feature-length debut), Les Jaunes – le film (an adaptation of a popular webseries) and 1987 (Ricardo Trogi’s follow-up to the autobiographical 1981) are all premiering alongside the usual solid program of homebrewed shorts.

Documentaries From the Edge returns with films about George Takei, Weng Weng (the little person star of the cult James Bond spoof For Your Height Only), obscure cultish local director Simon Boisvert, the ever-present of plasmodial slime mold (look it up!), a Nova Scotia native who dreams of being a kung fu hero and MMA-fighting Christian priests.

Add in a plethora of short film programs, a couple of book launches, parties, Q&As and a lot of time in line and you’ve got yet another stacked year of Fantasia. Tickets go on sale on July 15, so you have five days to pore over the schedule and lose your damn mind.

Other highlights among the new announcements include:

Ghost in the Shell

Brand new HD master of this classic anime, screened as part of a lifetime achievement presentation for Oshii

The House at the End of Time