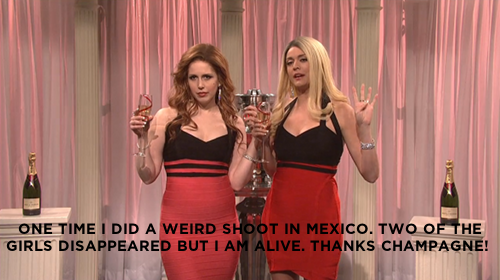 The Just for Laughs comedy festival is in full swing this week, and the programming is as diverse and plentiful as usual. These are our highlights (to buy tickets to any of these shows in advance, click here):

The creators and stars of web-series-turned-TV-sitcom Broad City (on Comedy Central in the U.S., MuchMusic in Canada), July’s Cult MTL cover stars Ilana Glazer and Abbi Jacobson, bring a live version of their show to JFL. See our feature interview with them here. Club Soda, July 22, 7 and 10 p.m., $39.65–$54.15

One of Samberg’s Brooklyn Nine Nine costars, Chelsea Peretti, is an actress, TV writer, journalist and stand-up comedian who you may have also seen on The Sarah Silverman Show, Louie or The Kroll Show. Her American Treasure show at JFL should be tight. L’Astral, July 23, 11:30 p.m., $36.15–$48.15

Ah, Seth Rogen. He’s Canada’s top stoner bro comedian, star of all those Judd Appatow flicks from the aughts, part of the brilliant ensemble cast in last year’s This Is the End. He’s also at the centre of an international controversy, as a movie he made with his playmate James Franco (The Interview, due out in October) has caused North Korea to threaten war on the U.S. if it’s released. That should make for some serious laughs at when he hosts the Hilarity for Charity gala. Place des Arts (Salle Wilfrid-Pelletier), July 26, 10 p.m., $62.35–$166.37

The Just for Laughs festival runs through July 28. See the complete program here.