We’ve spoken to three important acts playing Osheaga this year — Chvrches, Chromeo and Danny Brown — and those interviews can be found in the August edition of our newspaper, being distributed across the city today (here‘s where you can find it). But here are nine other bands and DJs playing Osheaga 2014 that you don’t want to miss:

This local rock ’n’ roll band on the ascent played our rooftop anniversary party in July and lit the place up with sick energy that spilled onto St-Laurent and had street-level rubberneckers gawking and pointing skyward. This will be an excellent way to kick off Osheaga, and a great excuse to get to PJD bright and early for the festival’s kick-off, work/ school be damned. Just listen to their Reality Strikes EP and try to restrain yourself from bouncing off the walls. [See our interview with le Trouble here.] (Lorraine Carpenter) Friday, 1 p.m., Trees stage

Come and have your faith in electronic music restored at the homecoming show for this local lad turned jet-setting producer and DJ. Fresh from a tour that saw him play to crowds in far flung locales such as Manila and Tokyo, Greene brings his live set to the Piknic stage on day one. After catching him earlier this year at Espace Réunion, I can attest to his formidable skills as a performer who can win over crowds through his own enthusiasm alone, rather than by using confetti cannons and gimmicky bass drops. Consider him the anti-Skrillex (who, incidentally, is playing at the same time on a different festival stage). [See our interview with Jacques Greene here.] (Michael Sallot) Friday, Piknic Électronik stage, 8 p.m.

I have a feeling there are gonna be a lotta fest-goers under 25 who, if they happen by the main stage during this set, will find themselves going, “Hey, I know that song!” over and over, until they realize they are watching one of hip hop’s most important groups ever. Reunited for the first time this decade, Andre 3000 and Big Boi forged the path for the South to rise in rap music. But they also had the added benefit of having been so ahead of their time in the ’90s that today they’ll blend in with what’s current, no problem. This reunion has been shaking festival stages since the spring to widespread acclaim, and Osheaga is in for a seriously fun history lesson on day one. (Darcy MacDonald) Friday, 9:05 p.m., River stage 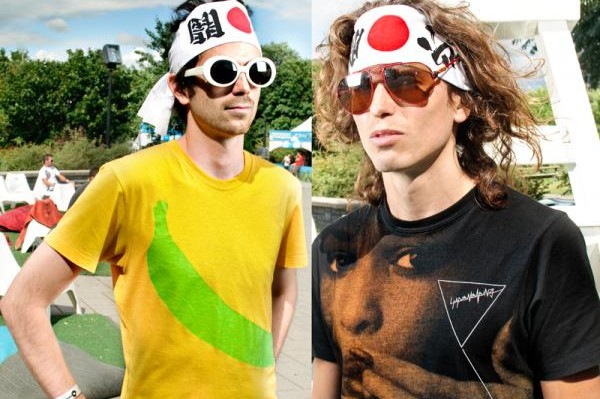 We’ve called these guys Quebec’s Daft Punk on more than one occasion, but just to clarify, we mean Daft Punk before they got boring (and super successful). Signed to a cool local label called Lisbon Lux, the duo has released one album, Aviator 2000, a post-apocalyptic video for the title track that promises sequels (to form a glorious trilogy, of course) and just last month they released their own video game, and its soundtrack. They’re having fun with it and so should you. Pack in early on day two, and be ready to dance. (LC) Saturday, 1:35 p.m., Piknic Électronik stage

From Greenwich, NY, this synth-pop duo has done the DIY thing, the indie-label dance and most recently the major-label hurdle race, and while we can’t speak to how that’s working for them day to day, their music is only getting better—check their album Voices and their Big Boi collab “Objectum Shalamar.” While it hasn’t been long since they played the Montreal area, their February show happened in Laval, and we know that most of you weren’t there. So unless you’re dead-set on watching Haim’s stanky classic-rock rehash and guitar-solo faces, Phantogram is the only place to be. (LC) Saturday, 4:55 p.m., Green stage

This shaggy band of underdog disco punks know how to get a party started, and it’s a shame that they have flown below the radar for so long. Nevertheless, they have some serious jams up their sleeves, and onstage, frontman Nic Offer is a force of nature. You may not know the words to all their songs, but I can all but guarantee that you will be dancing to their funked up rhythms as they take to the Tree stage in the early evening of day two. (MS) Saturday, 6:45 p.m., Trees stage

NICK CAVE AND THE BAD SEEDS

Thirty years of near-constant recording and touring have done little to dull this band’s capabilities. In fact, some would argue that they are only now reaching the height of their creative powers, both on record and in their fearsome live performances. Expect to hear some cuts from last year’s excellent Push the Sky Away, as well as a healthy dose of classics from their 15-album-deep back catalogue. Festival shows can sometimes feel a bit loose and impersonal, but Cave & co. always manage to bring you into the moment while conjuring up the forces of good and evil through song. (MS) Saturday, 8:05 p.m., Mountain stage

C’est classique! The French tech/house icon will provide a bit of back-story to the EDM-riddled Piknic stage, noted for its sweaty, twitchy two-steppers and high levels of barf-tastic energy. Let’s see what the bros and their hos will make of a proper legend, in broad daylight. It’s possible that they’ll get so turnt-up that everything thereafter fails to get them that high again, forcing them to explore the other five stages in search of some truth. Or maybe they’ll just keep mashing their teeth, oblivious to the fact they’re in the presence of electronic royalty. (DM) Saturday, 8:55 p.m., Piknic Électronik stage

Surely, the Great Language Riots of Osheaga 2014 will be taught for years to come in EDUC400-level courses across the province. If the winners write the history books, I can’t wait for my kid to be in high school and ask me what language we all spoke before the Obies’ music assimilated all of our mother tongues into one mechante poutine of Keb creole, foreign to anyone over the age of 30. “But why was Mathieu Bock-Côté so angry, Dad?” He was just really sad, actually. No one told him his era was over. They tried mais y comprenais pas. Passe la coocoon. [See our interview with Dead Obies here.] (DM) Sunday, 10:10 p.m., Trees stage

Osheaga takes place at Parc Jean Drapeau on Aug. 1–3. The only tickets still available are for Friday or Saturday ($95 apiece, or Gold Passes for $225 per day) and the Gold ($550) or Osheaga Experience ($950) three-day passes.