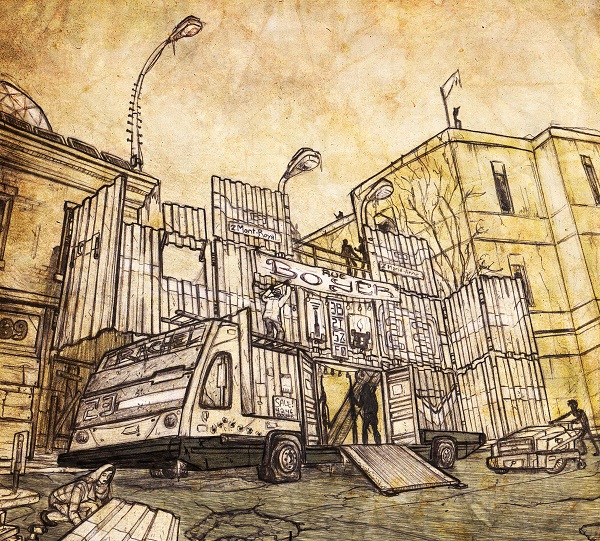 Back in November, we had a chat with Dan Buller and Lateef Martin about their plan to create a Montreal-based post-apocalypse comic called Z’Isle (rhymes with Mile). The idea was to take a zombie horror flick past the final resolution and explore what happens after the credits roll. What’s in store for the survivors? And more specifically, how would Montrealers fare in this situation?

Fueled by their successful Indiegogo campaign, the pair have been working hard and this week we’ll finally get a look at the first issue. I spoke to Martin about their crowdfunded achievement, the launch party and the comic’s future.

Kayla Marie Hillier: Tell us a bit about your Indiegogo campaign.
Lateef Martin: It went better than we expected. We requested support of $6,000, initially — it was to help support us to do the first four issues. Since no one in the field really knows who we are, outside of our friends and family, I couldn’t really ask for a huge amount of money. So we figured $6,000 would be a good start, and then we got $7,245. That was cool, it was nice to reach that. It’s good when you surpass your goal for Indiegogo because it’s just a feather in your cap to approach people and say, “Hey, we want to put our comic book in your store,” or “Hey, do you want to do an event?” because we have a following now. It gives us a bit more credibility. That definitely helped us. It also shows people that there is interest in it — it came out really well.

KMH: The format of the comic seems to have changed a little bit. What can people expect?
LM: The first issue is 24 pages. We’re kind of behind. I expected the comic to come out in March and that was really unrealistic because there’s so much to develop. We have over 100 people who are going to be characters in the comic. That was one of the perks that we gave: depending on the contribution that was made to the project, they got to be a character in the comic — people really dug that. We asked people to sign a release form so we can do whatever we want in the story with their character, but they were encouraged to come up with their own backstory and that kind of stuff. So people came up with some really cool ideas and we encouraged them to be other things beyond just zombie killers. We’re building a new community in this world so we needed doctors, engineers, teachers, that kind of stuff, and people were really creative.

It took us a few months to just develop the world and find the story. It’s still a work in progress but we have a really good idea of where it goes. That being said, we realized once we were storyboarding that 24 pages wasn’t enough, so we might need 28-pages. So each issue will be between 24 and 28 pages. We’ll probably do three or more volumes, and each volume will be around six issues because there are so many characters. There’s so much story to tell.

KMH: Are you happy to self-publish the comic or do you think you’ll eventually seek out a publisher?
LM: I’d be interested in a partnership. I want my company, Miscellaneum Studios, to be a transmedia company, and I eventually want the project to be a transmedia: the video game, a soundtrack and an interactive webseries as well so, it’s an opportunity for my company to make its space on the scene. But I’m definitely open to partnerships because I’d never turn my nose up to someone who has something interesting, I’m definitely down for that.

KMH: Can you tell us a bit about the launch party?
LM: We have a DJ who’s going to be playing some awesome stuff, some bass and soul — he plays some incredible music, a wide variety of stuff. St-Ambroise and St-Viateur Bagel are actually sponsors for our event. We specifically wanted companies that are Montreal-based. That’s another thing about Z’Isle, it’s very Montreal. We want to focus on local businesses. If you come early, we’ll have some bagels and treats. We’re going to have a good night with good music. It’ll be fun!

KMH: When do you anticipate the second issue being ready?
LM: At first I was thinking every two months, but considering the amount of work I’ve put into the first issue — it’s so much work — I’m thinking it’ll be in three months. So, some time after Comic Con. We’re going to be there for sure, we have our table already. We’ll hopefully have issue 2 soon after that. ■