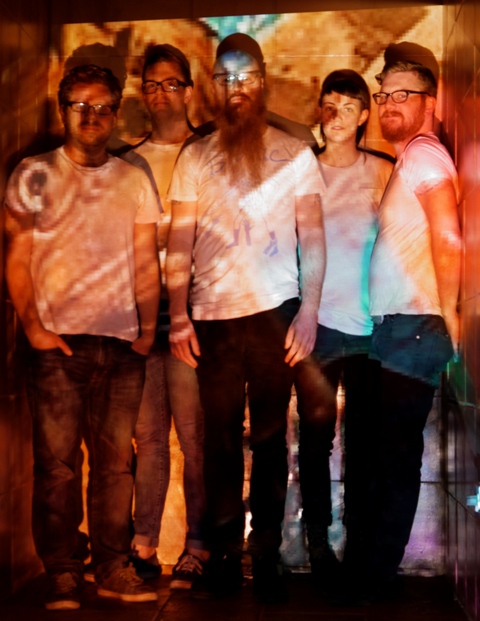 “I thought it was cool that someone would write that on a bathroom wall,” Jonathan Cummins (aka Cult MTL columnist Johnson Cummins) tells me of his latest band’s name. “It’s not topical.  I don’t like things that are topical.”

This doesn’t surprise me. I met up with Cummins (ex-Doughboys, Bionic etc) and Brendan Drouillard, both of whom do double-duty singing and playing guitar in USA Out of Vietnam, to talk about the release of their first record, Crashing Diseases and Incurable Airplanes.  Though the record was released a month ago in Europe and Japan through Aurora Borealis, its North American release on New Damage Records isn’t until June 24.  I guess they split the difference with tonight’s record release show at la Sala Rossa.

We agreed to meet at 3 p.m. to talk about the new record over a beer at NDQ, which apparently isn’t even open on Wednesdays.  Both Jonathan and I are late, while Brendan was trying to figure out what time the five members of the band will be able to meet to jam that evening.  We try to sort out where to go instead, but have already lost Cummins to another conversation.  “Going anywhere with him is like trying to herd cats,” Drouillard tells me.  As we walk through Little Italy, stopping for coffee and a great sandwich at Caffe Italia before settling in the park for this interview, we collectively wonder how Montreal’s famous large ensembles manage to ever get anything done.  By the time we began to even discuss the new record, it’s already four.

This all seems fitting for a band that took four years to put out their first record, comprised of five long songs. They’re not topical, or typical, they take a long while to do anything, but in the end the journey is worth it.  A belaboured metaphor, perhaps, but that was a really good sandwich.

Like seeing the remnants of an old flyer on a telephone pole, their mixture of heavy guitars, psychedelic textures and slow vocal harmonies draws power from the anachronism.  Though some version of USA Out of Vietnam had been kicking around town for years, playing shows with the likes of Mogwai, Locrian and the Handsome Furs, this LP is their first release.  The early incarnation struggled to find a sound.  “At first, it was like a technical metal band.  A lot of parts, not cohesive so much.  All head, no heart,” Cummins insists.

The artwork  featured on the album packaging was created by Andrew Dickson and Amy Torok for an early EP that was never released. The band was unhappy with the tracks they recorded, but Cummins was in such awe of the intricate psychedelic artwork that he was inspired to craft an album deserving of it.  When Drouillard joined, they began scaling down and throwing songs away.  The music became more minimal in order to create space for layers of texture and vocal harmonies afforded by having a second vocalist.

Classic rock bombast is there in Eric Cohen’s drumming, but reined in to allow space for the many, many other layers. Cummins, who says recording is his favourite aspect of the band, states that he was listening to a ton of ELO when doing the production for the album, and it shows in the attention to detail.  Each song has a strong but minimal foundation, leaving a lot of room to build upon.  Guest musicians provide a variety of additional arrangements, including a brass section, a choir with Molly Sweeney and Patrick Watson (“He doesn’t remember doing it”), and  “way too many guitar parts.”

“When Howard [Bilerman] got it,” Cummins explains, “he saw all the tracks and said, ‘I’m not mixing this — you’ve got to start throwing things out!’” Self-financed and recorded by the band in part at the legendary Hotel2Tango, Cummins called in favours and even traded one of his guitar amplifiers to the studio to have his friend Bilerman mix the record.

The obsessive layering and mixing paid off, but it was a long road that led to Crashing Diseases and Incurable Airplanes finally being released.  In the years since completing record, the band has further expanded upon their sound, and the addition of new members seems to have reinvigorated the group.  They’ve transcribed the brass parts for guitar, and make use of samplers and keyboards for the rest.  The addition of Jordan Brown on bass and Merida Anderson on keyboards and loops has them now writing four-part harmonies, and Cummins’ ceaseless insistence that they are really a pop band makes a bit more sense.

Anderson joined the band right as the record was being released. “As soon as she sang at the first rehearsal, we were like, ‘Oh my God, that’s the Stevie Nicks we’ve been looking for.’”   The show tonight will be a welcome celebration of a long-awaited album, as well as a chance for the now-quintet to show how far they’ve come. ■