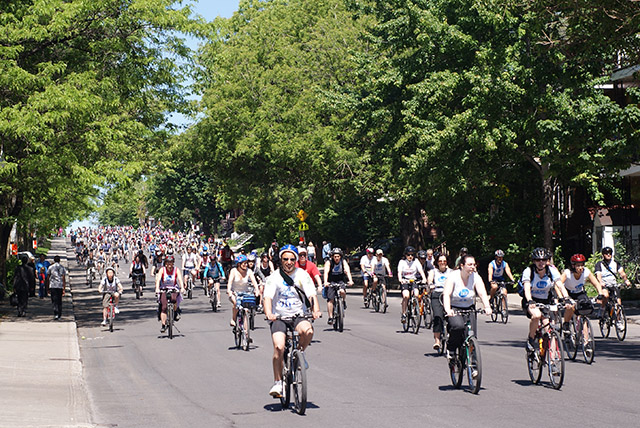 I love cycling. I love it for getting around town, I love it as a way of day-tripping the region, I love it for camping adventures. I’ve even rolled the dice with airlines and taken my bike on cycling vacations. Would I love to see everyone, regardless of age or ability, riding bikes as often as possible? You bet. So I must love the Tour de l’Île — the crosstown bike marathon that had its 30th edition last Sunday — right?

The messages that the Tour sends about cycling are counter-productive. It presents cycling as something you do as part of an event, rather than a tool for daily living, and one that many people feel a need to train for. True, plenty of people do actually train for this by riding bikes outdoors, rather than locking themselves in the gym. While any cycling is better than no cycling, that training tends to entail lengthy weekend rides on protected paths, rather than incorporating the activity into the everyday routine.

Also, training with the Tour as a goal sets it up as an endpoint. Once the Tour is done, there may be a few weekend rides at some point over the summer, but for a lot of people, that’s it — which makes a certain amount of sense. Holding the tour at the end of May allows for only four to six weeks of outdoor training time, meaning they concentrate all their training into that one short period, at the end of which they’re burned out on it. If the Tour were held in early October, then maybe training for it could be turned into an actual and meaningful increase in cycling as active transport, which is the event’s original goal.

That so many people effectively stop biking after the Tour indicates that it’s also teaching them that cycling is an activity best performed in large numbers on closed-off streets and/or with a police escort. Logistically, I wouldn’t want to see 30,000 weekend warriors set loose in the same place without some kind of containment strategy either, but when the discussion about cyclists’ place on the road seems to be re-opened every other day, accidentally reinforcing the idea that the roads can’t safely be shared won’t encourage individuals to adopt cycling as a daily activity.

The road closures also create massive frustration on the part of motorists, effectively making the roads more dangerous for cyclists — again, counter to the Tour’s intended purpose. In the three weeks prior to the Tour, I experienced more consideration and respect on the road than ever. In the 36 hours after, I’ve been honked at repeatedly, cut off multiple times, and aimed at twice (so, back to business as usual). Admittedly, my own experience is too small a sample size to be representative, but I think most regular cyclists would agree that road closures of any sort increase driver frustration, which is often acted out on cyclists.

Drivers aren’t the only ones dealing with circulation disruptions during the Tour. The routes often also restrict access to public transit, whether that means a bus being re-routed too far for someone with a physical limitation to reach the alternative stop, a bus being cancelled entirely for the day, or bus stops and metro stations being rendered essentially inaccessible by Tour volunteers and police details refusing to allow pedestrians to cross the route to get to them. If you’re trying to travel around the city by bike yourself, and run into part of the route, good luck — no one will let you cross at any point, and if you’re near your destination and even dare suggest walking your bike down the sidewalk for a block or two to make it, expect to be treated like a thief for attempting to join the Tour without paying for a bib.

This basically leaves anyone living on the “wrong” side of many parts of the route effectively housebound so that 30,000 people from outside their neighbourhoods can come through unimpeded. The message this sends is threefold: it tells participants that cycling isn’t something you do in your own neighbourhood, but in some other part of the city (one that you likely have to drive to with your bike on the back of your car, no less); it tells people in those areas that the right of way accorded to those who’ve paid for the privilege is absolute, and locals don’t matter; and the fact that participants have paid for that privilege at all sends a message that cycling is only for those with the financial means to participate.

The last two are particularly insidious. People pay anywhere from $32 to $95 to ride in the Tour, depending on how early they register and how far they want to ride, and because they’ve paid that money, people in areas bisected by the route suddenly don’t get to go about their lives. And let’s not forget that the areas usually affected tend to be those that aren’t exactly associated with higher incomes: Villeray, Hochelaga, Montreal North, and so on. That the entry fees are so high is a barrier to entry for many of the people in the areas most affected by the Tour route, adding insult to injury — not only can residents not beat the Tour, they can’t join it, either.

And what does that fee buy you, if you can participate? According to the Tour’s website, a bib, rest areas and mechanical services (staffed by volunteers), and “distribution of our partners’ products.” That’s right. For as little as a week’s grocery money, you too can be marketed to by corporations paying the Tour to be there, funds which are clearly not being used to keep entry fees low.

Or, you know, you could just get on your bike on any day, at any time, and ride around the island on any damn route you like, on your own, and find it to be cheaper, more fun, and maybe even worth doing regularly. ■