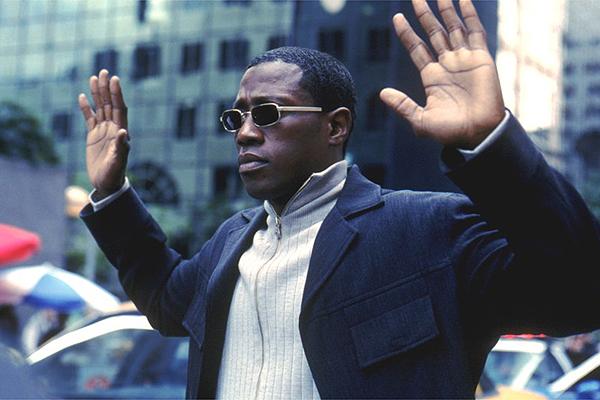 The Art of War

Does Montreal play itself?: Nope. As was decreed by the 1998 Democratic Act of Generic Action Movies Shot in Montreal, it is standing in for New York (and briefly Hong Kong).

Most egregious local landmark: As decreed by the aforementioned bill, all generic action movies shot in Montreal must slavishly remain within an area defined roughly by Ste-Catherine to the north, the Old Port to the south, Crescent to the west and Bleury to the east. (Special permissions can be allotted for car chases to happen in and around Griffintown and the surrounding port area.) Making unsurprising appearances in this film are Place Ville Marie (exteriors are used to represent UN headquarters), le Théâtre St-James building (seen previously in Swindle), the Sun Life building (standing in for a hotel, it is featured prominently in many fight scenes where Wesley Snipes drops 100 feet straight down directly onto his feet and sprints away) and Tour de la Bourse (scene of the final showdown).

Notable local talent: Liliana Komorowska (director Christian Duguay’s wife at the time) shows up as one of Snipes’s fellow CIA operatives, but I think the most notable presence here is the constant flow of local news anchors and television reporters in bit parts. Films shot here tend to use one anchor throughout, but The Art of War is riddled with appearances by people like Andrew Peplowski and Frank Cavallero that stand out more than the many other local names hired to stand around in cop uniforms.

Much digital ink has been spilled over the fact that three local filmmakers are currently working in Hollywood. But even before Villeneuve, Vallée and Falardeau made a splash in Hollywood with award hopefuls, a couple of local filmmakers had already cracked the market, albeit with somewhat more lowbrow fare. Yves Simoneau and Christian Duguay have both been kicking around Hollywood for over 20 years, and although their film work doesn’t tend to get the accolades of the new generation, they’ve made some pretty big movies (in the sheer scope sense).

The Art of War was probably Duguay’s biggest hit, but this Wesley Snipes vehicle has all but been forgotten in the 15 years since it was shot. Not that surprising, considering that Snipes’s fall from grace apparently made audiences realize that they didn’t miss him and his mostly-generic output. (It doesn’t help that Snipes is one of those action stars whose only interesting work was done in non-action movies.) Snipes made a lot of these interchangeable action thrillers during his career, but only one of them brought its sizeable amount of explosions and people being kicked in the trachea to the mean streets of Montreal.

Neil Shaw (Snipes) is a CIA operative so covert, he technically doesn’t even exist. His handler (Anne Archer) works very hard at making sure Shaw is untraceable when he runs around making things explode in the name of freedom. Shaw finds himself in a complicated (though almost entirely disposable) plot involving nuclear secrets, North Korea, Asian sex clubs, UN Secretary-General Donald Sutherland, subcutaneous GPS trackers and a beautiful but reluctant translator (Marie Matiko) caught in the middle of it all — he solves everything by being quicker, stronger, smarter and more likely to drive his car directly into a diner than the bad guys.

The plot is almost impossibly generic but I will say this about The Art of War and Christian Duguay specifically: he doesn’t let an uninteresting, undecipherable plot and paper-thin characters get in the way of action scenes. The film zips in and out of them willy-nilly; exposition is delivered curtly and mostly into the abyss; genres are cast aside as one scene goes from kung-fu to thriller to a sleepy Donald Sutherland with an old-man-semi-mullet discussing something or other for 20 seconds to keep up appearances.

What’s most perplexing about this is that The Art of War sees itself not as a junky action vehicle (which it is) but rather as a complex political thriller that just so happens to be both thunderingly simple and impossible to follow. That’s actually the film’s charm: its failure to grasp even the basic tenets of its chosen genre make it kind of like the filmic equivalent of Lonnie from Of Mice and Men crushing the rabbits from petting them too hard.

Duguay has a total hard-on for crane shots and constantly moving steadicam (operated, unsurprisingly, by Duguay himself) that keeps the movie barreling along at a breakneck pace, but ultimately the complete lack of interesting plot and the absence of charisma put forth by Snipes make The Art of War a pretty disposable thrill ride. It knows better than to be both boring and confusing, but neither of those things are desirable traits in a movie. It’s got a much higher budget than the Dolph Lundgren/Tom Sizemore/Gary Busey movies that were being made in roughly the same time period, but it uses our streets for the same damn things. ■