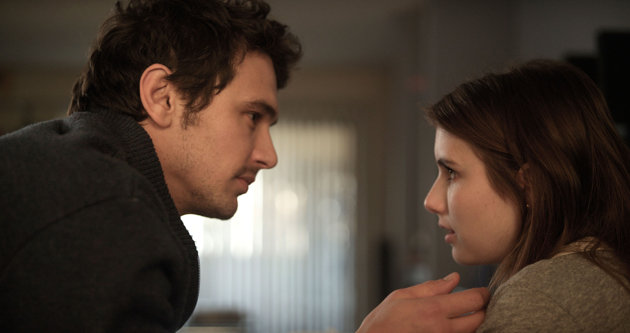 The 27-year-old niece of Sofia Coppola (and of course granddaughter to Francis Ford) studied photography for many years prior to directing short fashion films for friends and Opening Ceremony.

She didn’t seriously consider filmmaking until James Franco sent her a copy of his short story collection, Palo Alto: Stories. “James sent me an advance copy of the book. He didn’t want to direct it himself because he thought it would feel like redoing something he’d already done,” says Coppola. “He liked my photography, I think he thought it fit right. I connected with the book. It resembled a lot of my teenage experiences and the dialogue was really funny and authentic.”

The film, set in the expensive California charter city, follows April (Emma Roberts), the class virgin, as she navigates adolescence: drunken parties, relationships and sex. She has a crush on her stoner classmate Teddy (Jack Kilmer, Val’s son), who spends all his time with his best friend Fred (Nat Wolff), who seems a little ruthless at first but soon tips things into dangerously unwell territory. April also has a strange relationship with her soccer coach Mr. B (James Franco) whose somewhat manipulative tactics leave you feeling pretty uneasy.

“I needed some help to really understand that character [Mr. B],” says Coppola. “James was really helpful and supportive. It was nice for me to have him on set because he’s also a director and I got to know more about the characters.”

Another textbook teen portrayed in Palo Alto is “class slut” Emily (Zoe Levin), the antithesis to Emma Roberts’ April. Although we’ve seen this character many times before, there’s so much depth and sadness in Emily — I’ve found myself thinking about this character several times since screening the film. “Zoe’s such a talented young actress, she brought so much soul and sadness to the role. It’s one that’s typically typecast and it’s so much more dynamic than that,” says Coppola.

You could argue that the film isn’t that far removed from Sofia Coppola’s The Virgin Suicides or The Bling Ring; the somber tone, incredible music and realistic portrayal of adolescence, but Gia’s not bothered by these comparisons as she’s always looked up to her aunt. “My family’s always been really supportive. I love Virgin Suicides — she’s really paved the way for young female directors. I don’t know if I would have considered filmmaking had I not seen her do it first.” ■