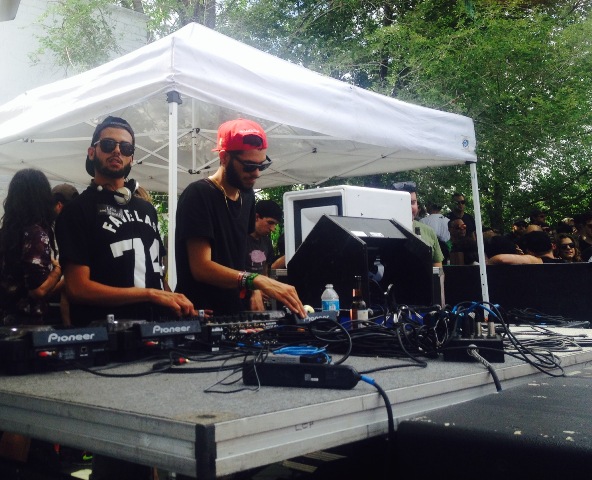 The 15th edition of Detroit’s annual electronic music festival, Movement, happened on Memorial Day weekend, May 24–27, and I was there for the fourth consecutive year.

I arrived in town a couple of days before the festival started, spending time at PJ’s Lager House, meeting up with old and new friends, riding my rental bike, vinyl shopping while drinking free PBR at Hello Records, getting dragged to afterparties, trying to buy a full tank of nitrous oxide (thank God, this mission failed) and eating mac ‘n’ cheese on a daily basis. That put my liver in a pretty bad state, but nothing techno couldn’t heal.

The sleepless nights started on Friday. The whole weekend, from 10 p.m. on May 23 to 4 a.m. on May 27 seemed like one never-ending party, with probably a total of eight hours sleep over three and a half days.  I had a dilemma on the first night. I intended to go see DJ Harvey, who was playing Bleu nightclub, but my new friend Ryan (you guys should check out his band, Jamaican Queens) made me realize that the club was douchey, and if I was in Detroit I might as well check out the cooler side of the city.

After a $15 cab ride, I ended up at Tangent Gallery.  It took a while for the place to fill up, but it was definitely the place to be, with a campfire burning outside, the sound set-up by a mythical Detroit soundman called Jim and my favourite set of the whole weekend, by Terrence Dixon (live) — he  played the festival the next day, but the show made more sense in a warehouse late at night.  Rick Wilhite and Glenn Underground provided solid DJ sets, too, but by this point, everything was blurry and I ended up after afterpartying in a 6,000 square-foot loft until the sun came up and I had to move my luggage from an Airbnb rental to the Holiday Inn downtown.

The festival officially began on Saturday at noon. Movement takes place outdoors from noon to midnight on four stages, plus a new silent disco.  The main stage is always fun to check out, but not for long — the sound quality is just too poor.  I want to give a big shout-out to Underground Resistance, who closed the stage that day with their Timeline project, a four-piece jazz band feat. Jon Dixon, DJ Mark Flash and UR founder Mike Banks on keyboards, accompanied by DeSean Jones on  saxophone. (If Laurent Saulnier happens to be reading this, please bring them to Jazz Fest next year — they would be perfect for an outdoor show in Montreal.)

Beatport had their own stage near the waterfront.  This location is awesome but way too popular for its own good — it’s so narrow that you end up getting pushed around non-stop.  I saw a bit of Monty Luke but decided I had to check out my favourite stage and didn’t get a chance to go back that day —I would have checked out Green Velvet, but I heard later that he didn’t deliver.

The Made in Detroit stage is THE place to be. The sound is perfect, and if you’re in Detroit, you might as well check out the locals. Bonus points: the sound system, and almost all-vinyl sets.  My favourite set that day was provided by DJ Minx — check her out right now if you’ve never heard of her. I’m sad to say I missed DBX live (with John Tejada on drums!!!) on the same stage later that day, but you can’t be everywhere, right?

The Underground stage is a concrete basement. That’s where the dark techno happens, with lazers and fog machines. I wouldn’t recommend it if you’re claustrophobic, but it would be your home away from home if you’re a vampire popping speed.

The last stage is brought to you by Moog, and unless you’re an EDM fan who loves Riff Raff, you just don’t hang out there.

My favourite afterparty, year after year, is Deep Detroit, organized by Kai Alce on Saturday night at a café on Broadway. They don’t serve booze, which means you can focus on dancing — for those who can’t go for five hours without a drink, locals will pour you a glass of vodka cranberry in exchange for a donation upstairs. My primary goal at this festival is to find the best dance partner, and I found him at that party, where Jay Daniel and Mike Huckaby were spinning a mix of Detroit techno and soulful house and disco.

Around 5 a.m., I ended up at the Mix where my NYC friends R.Gamble and Michael Rogers were playing alongside MGUN and Marshall Appelwhite, a true discovery — but I can’t even describe it considering how intoxicated I was, but check him out if you’re looking for something fresh. The sun was up again when I cabbed to the hotel and dove into the pool with friends, only to be rescued by this bald guy who lured us to his room with the promise of all the drugs in God’s creation. (For the record, he passed out before we did.)

And as you can imagine, it was almost impossible for me to make it to the festival on Sunday. I did however catch an excellent set by Mike Huckaby, and I wish I could’ve gotten over my anxiety and dived right into the crowd at the Underground stage to catch Robert Hood.

Once again, I ended up at two afterparties. The first was Excursions, with two Chicago DJs sharing the decks with Detroit legends Rick Wilhite and Macellus Pittman.  This party always ends up being one of the best, with a dancefloor filled with professional house dancers. But I had to leave around 5 a.m. to catch the end of the mythical No Way Back party, presented by the NYC Bunker crew back at that Broadway café.  As soon as I stepped in, my ears were assaulted (in a good way) by some primo techno. Patrick Russel was on the decks, tag-teaming with BMG, and that was the wake-up call my legs needed. When the party ended at 7 a.m., most people were heading to Old Miami but I ended up in the pool, then in my bed trying to sleep for two hours.

By 11:30 a.m., I was in a line-up to get into Old Miami, the dive bar where Seth Troxler hosts his legendary Monday after-afterparty.  We ended up waiting for an hour before getting in, but it was okay — the Toronto guys in front of us had way too much Slows BBQ ribs and mac ‘n’ cheese so we ended up having lunch with them while drinking the 3- for-$5 PBR tall boys we’d bought at the closest convenience store. Once we got in (welcomed at the door by Troxler himself), Martinez Brothers were playing a tech-house set that fit perfectly with the sunny garden vibe of Old Miami backyard.  They were followed by Dixon who killed it. This guy is to your ears what MDMA is to your brain! You can only imagine what the combination of both will make you feel…

At some point I had to escape Old Miami and make it back to the festival.  I was mind-blown by Jeff Mills closing the Underground stage. I caught the last 30 minutes of Octave One live on the Made in Detroit stage, and that was it — time to head home.

Movement is not just an electronic music festival — it’s held in one of the cities that gave birth to techno.  The music experience is rich, but so is the human experience. All the Detroiters you meet during the festival have their techno stories, and for a music lover, this is really what makes the weekend so special. ■