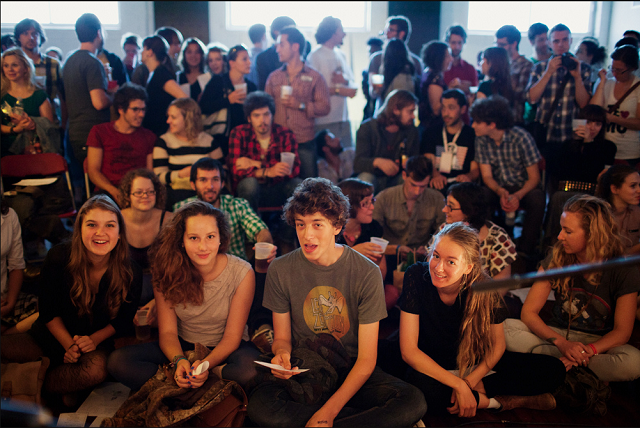 Breakglass Studios in Mile Ex is no stranger to hosting live performances – they’ve done them with the Pop Montreal and M for Montreal festivals in the past – but in conjunction with this year’s edition of Suoni per il Popolo, they’ll be opening the intimate space to more than just 50 to 100 ticket holders.

Sets by the Luyas, Little Scream and Maica Mia will be broadcast live online, a first for Breakglass. The studio will take care of the sound, while Parce Que Films will handle the multi-camera production.

“With Conan or Letterman, the centre of the show is focused on the talking part, and the band only plays one song. With us, we’ll have the interview, and then the band will play a full set.”

The first-time host hopes that the interviews, to be filmed in the studio’s control room earlier in the day, will flow as naturally as conversations do at the recording studio during regular working hours.

Live from Breakglass will also be an opportunity for those who haven’t had the chance to cram into the studio’s tight space to understand why the exclusive sets there are considered must-sees every time Pop Montreal rolls around. Past performers include local faves Plants & Animals, Moonface and Young Galaxy. Of course, there was also that secret Arcade Fire show (as les Identiks) in 2012.

Benjamin boasts that one of the songs on Reflektor, “Here Comes the Night Time,” actually uses part of the version recorded at that famed show.

“The energy and the sound of the recording couldn’t be beat. It was magical,” he says. “Win (Butler) played me the tune in his car after a basketball game, and he showed me how they were cutting from the intro they recorded in Jamaica into the full track that had been done at Breakglass. It sounds seamless.”

With all three bands expected to introduce new songs during their Breakglass sets, Benjamin is looking forward to catch lightning in a bottle again.

“We’re looking to provide a glimpse into the studio lifestyle,” he says. “The intention is to make this a regularly recurring show.” ■

A limited number of tickets are also available for each show, here