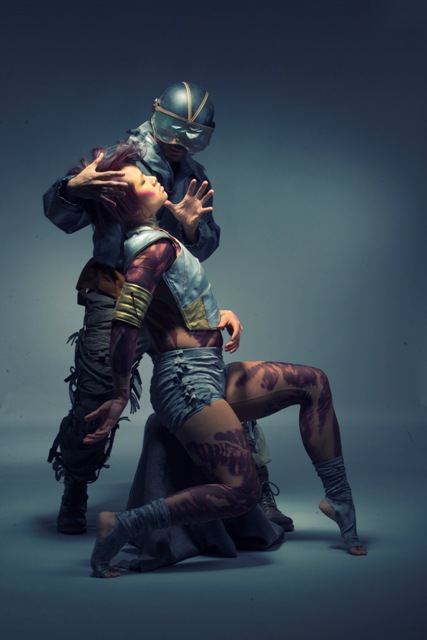 Fresh off an Indiegogo high after reaching their $4,000 goal, Jenn Doan, musician Tedd Strauss and their 15 talented collaborators are prepping for the Montreal and Ottawa Fringe runs of their sci-fi dance rock opera, Iredea.

Iredea evolved during a residency at le Gesù, which they were awarded during the 2013 edition of the Vue sur la relève festival. They performed it for the first time this spring at the Festival Accès Asie.

The show was strongly inspired by the writings of Philip K. Dick, author of Do Androids Dream of Electric Sheep?, which was the source material for Bladerunner. Doan says that with Iredea, their goal is to create a sort of “cinema on stage.”

“We used some of his concepts and ideas as windows into improvisation,” she explains on speakerphone from a parked car in Ottawa. “For example, the ‘mood organ’ was where people would dial in to experience different emotions. That gave us a lot of room to explore and experiment. How do you physicalize that through dance, music and improvisation? As we started getting into more sci-fi films, we started exploring more with timing, rhythm and slow motion, all those different qualities that filmmakers approach, and try to apply that to choreography.”

The creative couple use sci-fi as a springboard for creation because they enjoy drawing people into another universe. Strauss pipes up and says sci-fi makes his mind tick. “You’re presenting a world to an audience that is fantastical or not believable and therefore once people clue in to that, hopefully they start letting go of the urge to question. If you can get people to the point where they’re just able to accept, then you can open yourself up to believe what comes next.”

Mythology has often been the starting point for their dance rock opera company, Woo Me Myth. In their latest creation, three survivors in a post-apocalyptic world intersect while figuring out how and why to continue. The protagonist, played by Doan, is a sculptor on a quest.

Strauss explains some sci-fi elements of the production include a “bigger than a toaster and smaller than an SUV” surveillance robot that snaps audience pics. “We are told surveillance robots are everywhere, and the audience tries to figure out what the relationship is between the photos and the dancers.”

And, echoing the antique sci-fi story of Frankenstein, Iredea even features a smidgen of resurrection. “Early on in the show, one of the characters is paralyzed and almost dead and a surgical laser is kind of bringing this dead body back to life. It’s surprising to see, but you have to let go of your assumptions in the theatre, go along with the story and have fun.” ■

Iredea will be performed as part of the Fringe Festival at Studio Multimédia (4750 Henri-Julien), June 13–16 and 19–20, $10. Go to the Fringe website to see the schedule and buy tickets.