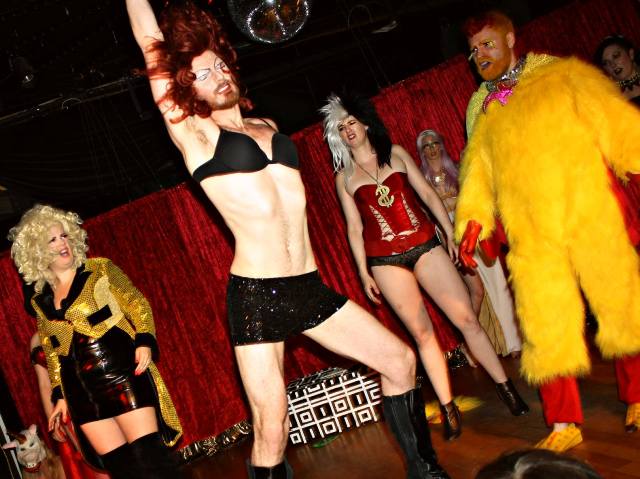 The Fringe Festival brings a wide variety of theatre, comedy, dance, burlesque and festive fun to venues all over the Plateau and beyond, with events happening daily in the Parc des Amériques, the site of the festival’s box office and beer tent.

The festival runs through Sunday, June 22, and to help you sort through its program and make some smart choices, we’ve reviewed six productions:

Local playwright duo Ned Cox and Alexandria Haber no doubt have another hit on their hands in this play about four high school friends who have lost touch over the years but are brought together again after being trapped in a disused basement detention hall at their class’s 25th reunion. References to The Breakfast Club abound, but the playwrights break fresh ground as the women let down their defences and rediscover their bonds over bad wine and good pot. The acting is excellent, but the production could have easily filled a much larger venue than the Freestanding Room. (Peter Wheeland)

A Bandolier of Dreams 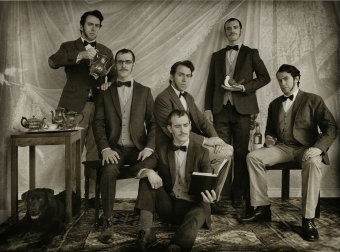 The Uncalled For guys are back for another Fringe – well, half of them at least—with Matt Goldberg and Mike Hughes starring in this absurd, improvised comedy and Dan Jeannotte directing them.

The concept is simple: two posh gentlemen with pseudo-British accents meet for tea, and then stuff happens: tea becomes wine, a secret wedding, a love triangle, the possible end of the world and, of course, a murder, and all  the while, the many props littering the stage are used in various silly situations.

Improv shows can obviously be very hit or miss, but thankfully, with these guys, there never seems to be a shortage of wacky ideas. On the day that I went to see them (Saturday afternoon), it started really strong and then seemed to meander a bit, with the possibility of funny story lines being shut down (the tease of a funeral speech?) in favour of others. Maybe they’ve just got too many ideas.

This being said, I’d love to go back and see it this weekend, after they’ve tried out a few more things and really know what works and what doesn’t, because you can’t really go wrong with an Uncalled For show. (Roxane Hudon)

One-person shows can make me a bit nervous. In general I’ve found that they can be hella entertaining or they can give you that nervous unease when you know someone’s bombing. I’ve rarely experienced anything in between. Gillian English’s A Drag Queen Stole My Dress, her autobio tale of a highly dysfunctional long-term relationship, allows you to feel cozy and taken care of as an audience member — but I did find English slightly unrelatable.

While surely everyone has had some horrific experience(s) while dating, I really did struggle at first to be charmed by the story enough to gather up the proper dose of empathy that I knew was necessary. But I do have to commend English on the fact that she did woo me by the end. Her personal story does indeed become much more universal which allowed me to dust some cobwebs off of my own experiences and appreciate the journey. (Kayla Marie Hillier)

Daniel Carin and Chris Sandiford (the writers, directors and performers in this show) are arguably two of the most likeable and charming people in this fine city. The pair cohost a free comedy open mic every Tuesday at Shäika Café and recently won Bloody Underated’s Best Local Troupe award at the Montreal Sketchfest, further raising the profile of their eccentric and quirky scenarios to entertain audiences.

The Midnight Living Room Lounge Show invites the audience into their home and follows the pair as they try to live like old-timey crooners (including their historic vices). Their brand of humour is safe, and I don’t mean that in a bad way — it’s just the type of show that you could bring your mom to. Relying on puns and turns of phrase — and of course crooning — the pair deliver some delightful entertainment. My only complaint would be that when things come together and they really hit it out of the park, that sensation wasn’t as consistent as I would have liked. But this is still well worth taking a gander. (KMH)

Don’t be fooled by the publicity pictures of the cute young woman in the dinosaur pyjamas holding a dino plush toy. Paleoncology explores the very adult themes of death and dying with intelligence, humour and pathos — throwing in some unusual dinosaur facts for good measure.

Kira Hall is sharp in her first solo performance, helped by her own smart script about ayoung woman, Lea, forced to face her fears about mortality after her older brother Daniel is diagnosed with cancer. Through the clever mix of  overhead projections, puppets, toy dinosaurs and reluctant conversations with an unheard therapist, Hall tells a painful story of sibling love and loss in a beautifully woven tapestry. Well-written and well-acted, it’s well worth seeing. (PW)

Imagine the best thing you’ve ever seen — that’s Turning Tricks. Hyperbole? Maybe, but I just want to make sure I get across how much I loved this show. Turning Tricks is what happens when the Rocky Horror Picture Show, sharp witty dialogue and non-preachy social commentary on consent, slut-shaming and social media have a body-positive baby.

The tale of Goldie Showers and her Gold Dust Women’s failed attempt at swindling a magician is littered with incredible musical performances (I have to mention Erik Mokus here — just wow), body contortion, pole dancing, burlesque, comedy, all with stunning costumes and make-up.

The Glam Gam Productions family is so inclusive that by the end of the show you almost feel like you’re involved in the performance. Though there’s very little to fault here, Turning Tricks isn’t for everyone — if you’re not a fan of the human body, for example, this probably won’t be your thing. But if all you want out of your Fringe experience is to be entertained and surprised by a wide variety of talent, look no further. (KMH)