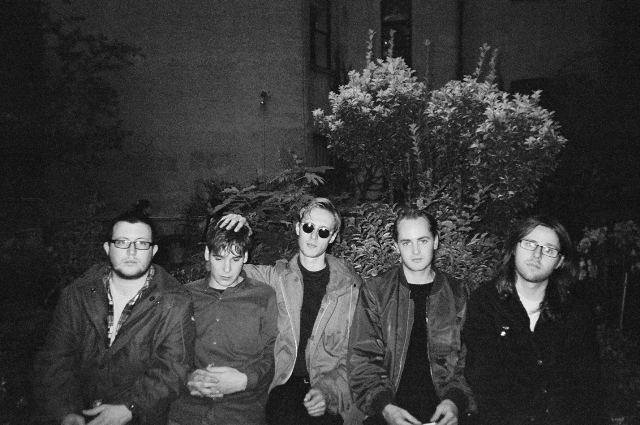 Punkish rock quintet Eagulls was formed in Leeds by five sleep-deprived guys fed up with the grind and the stresses of daily life.
Their debut album — released digitally by Dine Alone Records on June 3, four years after the band formed — turns those anxieties from a weakness to a strength. Or at least a punching bag to pound on with inspired noise.

“Our rehearsal space in Leeds is in some old industrial sort of building,” says frontman George Mitchell. “There are a lot of derelict mills in the area that people have bought up and are turning into art spaces. The room we wrote the album in was so small. After work we’d go sit in this tiny room for hours, just making a racket and recording it.”

The 9-to-5 jobs they did to sustain themselves at the time were anything but cushy. “They were stressful, dead-end retail jobs,” Mitchell says.

Showing up at their cramped jam space after punching the clock would be less than ideal if you were looking to create a clean studio masterpiece. Eagulls, on the other hand, would start with an idea, mess around with their guitar pedals and hammer away until the idea stuck. They operate at rock band tempos rather than hurtle at punk speeds, but they were recording at night, exhausted from work and thinking about that 7 a.m. shift coming up in a few hours, so the songs sound like they were done in a state of agitation.

“There’s a hunger of trying to get the album done that really comes across,” says Mitchell, adding that if you wanted to succinctly
describe what the songs are about, “morbid life” makes sense.

For the time being, they’ve been able to put those minimum wage jobs behind them. They’re currently on their first complete North American tour, and are taken aback—as most U.K. bands are the first time they travel outside of New York and Austin—by the vast expanse that is Middle America.

“The longest drive from city to city in Europe is probably about four hours. Here it’s eight,” he says. “Everything is double here.”

Spending eight hours on the road in a cramped van is a whole new kind of stress they’re dealing with. “Maybe we’ll write a song about it,” he says. “I probably have more stuff to write about now.” ■