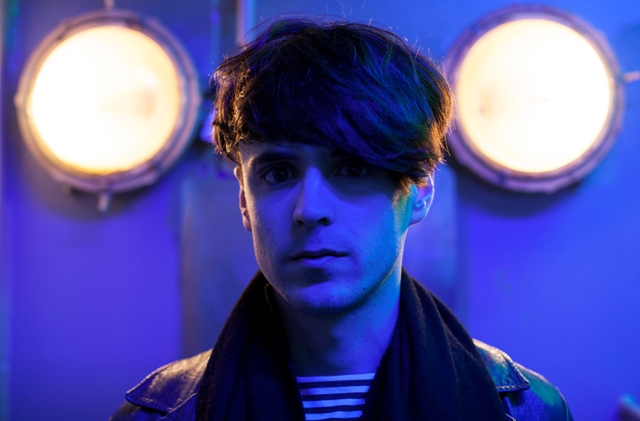 For the uninitiated, Automelodi is Xavier Paradis, a Montrealer who moved here from his native Quebec City in the late ’90s in the hopes of meeting some like-minded musical compadres. Before long he put his solo project (Arnaud Lazlaud) on ice to form an electro-rock trio called Echo Kitty, and later established Automelodi in 2006, a duo with a revolving cast of collaborators. Paradis is currently working with Simon Grenier-Poirier locally and his previously NYC-based Berlin cohort Hayden Payne when Automelodi tours Europe, which they’ll be doing in September.

Unlike Payne and so many other musicians and artists, Paradis has never lived in Europe, though he briefly considered trying to do his thing in both Paris and New York City. While he was underwhelmed by the scene in Paris, New York had a very lively minimal-synth community in Wierd Records, a label that hosted regular club nights, and released the first Automelodi album in 2010.

“I had been active for 10 years in Montreal and it felt like, from my perspective, the scene had sort of dried up,” says Paradis. There was really a lot of indie rock and indie folk, which is okay but it’s just not what I’m doing. There wasn’t that energy that there was in the early naughties and late ’90s, that weird eclectic energy where people from the rock scene would be curious about the electronic scene and vice versa, and there were a lot of interesting accidents. But these things usually don’t last.”

Even NYC’s Wierd scene has diminished in recent years, leaving Paradis feeling lucky that he never made the move — the cost of living and over-stimulation wouldn’t have aided his productivity anyway, he theorizes.

“I still like Montreal a lot. I have a modest lifestyle, an apartment with two roommates, but I actually have enough space to record and work on my music, and I’m not forced to work two jobs to pay the rent.”

Aside from ongoing DJ gigs at Casa del Popolo and Buvette Chez Simone, Paradis spent the better part of two years behind closed doors working on the new Automelodi album, Surlendemains Acides, coming very soon via Electric Voice Records. The album would’ve been out by now if not for an interminable delay at the vinyl-pressing plant in Nashville (the physical product’s gestation has been as long as that of a human baby), and though the shipment is finally on its way, it won’t get here in time for the show that’s happening on Thursday. The record was sold to European fans on CDRs during an Automelodi tour last year, but no one will hear it as it was intended until that vinyl arrives.

Surlendemains Acides retains an organic feel despite the absence of physical drums, which figured prominently on the first Automelodi record. And while that album was a collection of songs written from 2006 to 2010, this one was made more intensively, its songs more focused due to personal and public drama that was unfolding around Paradis at the time.

“I was moving around a lot, there was a lot of instability, but in terms of expression I felt [these songs were] much more straight to the point, and from a songwriting perspective, that’s more satisfying. [The sound is] also more direct, slightly more violent. It almost makes an elliptic link with what I was doing 14 years ago with my first solo project, Arnaud Lazlaud — I really concentrated on electronics, some light percussion, a lot of found sound, guitar, vocals, instrumentation that I felt was an efficient vector to convey the more dramatic emotions that I was going through.

“Also, I was recording tracks during the day in 2012, and you can hear people walking down St-Denis banging pots and pans. There was a strange tension in the atmosphere around that time.”

As for the future of the local scene, and moreover the global minimal-synth community — which has spread in recent years due to the proliferation of reissues of once-obscure European acts of the early ’80s — Paradis suspects that there will always be an audience for that sound. Call it post-modern if you will (or even passé, if you were old enough to have seen the likes of Gary Numan in his heyday), but Paradis’s take on where electronic music fits into the big picture sounds logical to me.

“Rock has been post-modern since the early ’70s,” he says, pointing to glam rock’s neo-’50s stylings as the beginning of the backward-looking trend. “I’ve never been interested in electronic music as a way of bringing the future to the masses. Kraftwerk did a splendid job of that in the ’70s and ’80s, but for me it’s an idea that died somewhere in the ’90s. You’d go to a rave and you’d think, ‘Okay, this is the future,’ but that was it. There are still people who are really pushing boundaries of technology as applied to music, but it’s never what has appealed to me about making electronic music. I see what I do as a form of post-modern folklore. I’m writing songs that could be written on an acoustic guitar.” ■