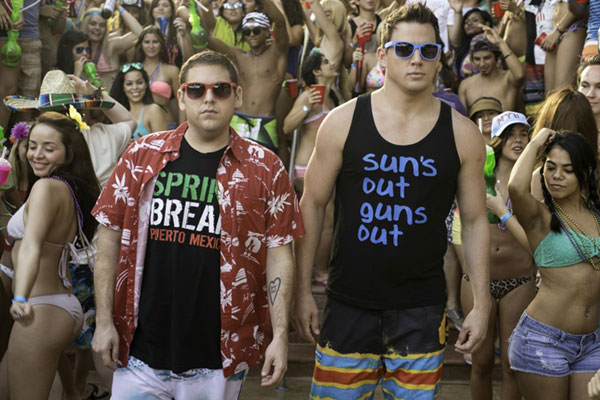 In the best case scenario, a sequel to a successful comedy will be an enjoyable but generally forgettable second run-around that doesn’t tarnish the first installment, but more often than not you’re faced with a bunch of empty-eyed saddos (now paid 25 times what they made for the first installment) half-assedly running through a bunch of jokes whose punchline basically boils down to “Remember this, from the first one?! We added more dicks/farts/people falling down!” But Phil Lord and Chris Miller (who already delivered The Lego Movie earlier this year) knew that’s what we’d expect and turned the sequel to 2012’s reboot into a knowing parody of sequel tropes that’s not necessarily as fresh as the first installment but almost as satisfying.

Schmidt and Jenko (Jonah Hill and Channing Tatum) are back on their regular beat when a colossal fuck-up trying to pin a drug lord named the Ghost (Peter Stormare) lands them back in the midst of the Jump Street undercover program and the stern arms of Captain Dickson (Ice Cube).

Our aging one-time rookies are sent to infiltrate a local college to find the source of a new drug called WHYPHY. This time around it’s Jenko who fits in with the football-centric jock culture of college, while Schmidt struggles to connect with the pukka-shell-wearing, binge-drinking bros. As Jenko befriends a football player (Wyatt Russell, son of Goldie and Kurt) with whom he has an almost supernatural synergy, Schmidt finds himself cast aside by his best friend and partner and essentially working the case alone.

A lot of the film is the same: the broadly outlined homoeroticism, the odd-couple action scenes (Tatum routinely hops over walls while Hill takes the stairs), the skewering of school cliques, the drug trip scene… All of it carries over with a knowing nudge, wink and poke in the ribs, which can get a bit tedious — but it works better than it should thanks to the inventive filmmaking of Lord and Miller and the chemistry of its stars.

Lord and Miller never forget the action that anchors the comedy and pepper the film with inventive (but sometimes real silly) sight gags, while keeping the action fairly coherent. At this point they’ve directed as many animated features as they have live-action and their aesthetic flows freely between the two, notably in a car chase that has Hill and Tatum struggling not to destroy expensive sets and go over-budget but also nods broadly to Benny Hill.

Tatum was the real revelation of the first installment; while we knew that Jonah Hill could play the flustered and overly emotional Felix Ungar type, Tatum had never really been in a comedic role before. His genial doofiness is the star here once again, selling the dumber aspects of the homoerotic relationship with perfectly timed cluelessness. Points also go to former SNL scribe Jillian Bell (of Workaholics and Eastbound & Down) as the stuck-up, unpleasant roommate of Hill’s love interest Maya (Amber Stevens). Without revealing too much, she proves to be the most surprising comedic weapon in the film.

At 112 minutes, 22 Jump Street is kinda flabby — I certainly could’ve lived without the scene where they visit jailed 21 Jump Street baddies Rob Riggle and Dave Franco, prompting the laziest kind of he’s-my-bitch-now humour. It probably doesn’t play nearly as well if you’ve just watched the first installment since it’s so insistent on poking fun at its repetitive nature; it doesn’t have nearly as fresh a look at college tropes as it did high school ones (though that may well be college’s fault). It’s all of these things, but it’s also pretty fucking funny. I’d be willing to forgive a lot of fumbles for a comedy sequel that wasn’t just warmed-over leftovers, but 22 Jump Street not only heated them to the right temperature, it warned me they were leftovers and made fun of me for not heeding their warning. Can’t argue with that. ■