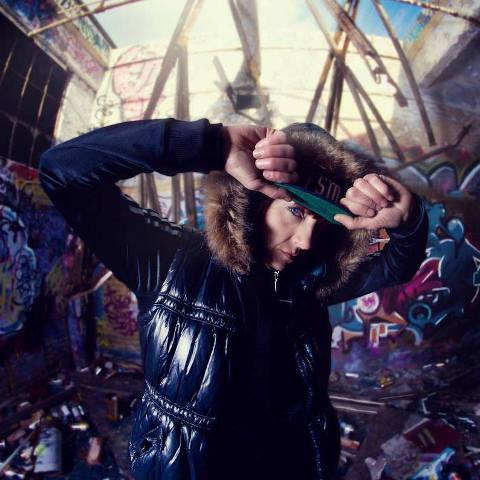 Gearing up for its 19th festival later this summer, the Under Pressure International Graffiti Convention puts the ladies first this weekend with Queens Creation, a brand-new, all-female sort of micro-showcase of what the larger festival encompasses in August each year. The ladies get up on the walls, down on the break mat and all over the turntables, with guest DJs Cream and Melodrastik and featured painters MC Baldassari, Griboulliz, Wuna and CGO.Vaes

I spoke to event organizers Melissa Proietti (who, full disclosure, I have known since her awkward phase and have worked together with as an Under Pressure volunteer) and Ana Vaes to get an idea what it’s all about.

Darcy MacDonald: First off, why create a female-only event under the banner of Under Pressure? What is the desired outcome?

Melissa Proietti:  I wanted to create something related to Under Pressure for women for a few reasons. The first is that last year during the women in hip hop conference at the FP gallery, all of the women sitting on the panel agreed it would be a positive thing in terms of putting the spotlight on female artists. The idea was never to isolate women but to showcase them. Women are often outnumbered by their male counterparts in these kinds of events and this is simply a way of creating a space where it is impossible to look over the contribution women are making to these art forms and impossible to deny that women are just as present and important in the arts.
What became really important for me was to do it in a space where there will be a lot of young families and youth who will hopefully be inspired. We also partnered with Montreal Community Cares who started doing an annual event for young women called Empower Us. I thought it was really important to have Queens Creation be about reaching out to the younger generation and making these arts accessible to them.

DM: How have you seen women’s roles change in urban culture and the festival itself, for better and worse, in the eight years you’ve been involved?

MP: My personal experience with women’s roles within the festival is that women are very present but I find don’t always get the coverage and emphasis of being there. There’s always a few pics of women but it’s not diverse enough. As the person who organizes UP in its entirety I find it funny that most people think it’s a male dominated festival, and tend to go towards the men involved for information and direction.
That being said I have had nothing but positive experiences with the people involved, the people I work with and the festival founders. I get a lot of respect and appreciation from people so I really want people to understand that as a woman I’m not treated any differently. We just need that message to get out there.

DM: Under Pressure has a high profile in south west Montreal. How did this particular event end up as part of the annual Wellington Street Sale, which I can safely assure you is incorporating this type of aspect for the first time ever?

MP: For the street sale it seemed a perfect fit because I was looking for a venue and they were looking for activations.
I didn’t want to do this on the same site as the festival because I wanted it to exist on its own, I didn’t want it to be the “girl version” of UP. So by taking it into a neighbourhood where I’m closely linked — I work and live in the southwest — it seemed like the perfect spot to start something new.

DM: Do you think that focusing on female talent in the domains of dancing and graff allows participants a greater freedom to express themselves?

MP: I truly think the women who paint at UP don’t feel limited by what they’re able to express and I think the women who battle are confident in taking their place. I think this is about promoting expression but also celebrating local artists who have a lot going on and have a lot to showcase. The space is there to be used creatively. I want the feelings of respect and appreciation to be what comes out first and foremost this weekend.

DM: Ana, maybe you can explain how/why you chose this participant line-up, and also explain to me your take on the importance of women’s roles in the typically male-dominated culture of hip hop and its elements.

Ana Vaes: All the participants in the line-up for this festival are artists Fresh Paint is already familiar with and had the pleasure to work with in the past, we chose them carefully based on style and team work, something we value highly at the gallery. Sadly there are not that many female artists in the city that stand out, we hope this event will bring more light to the subject and expose more beautiful souls to share their art and sounds.

There’s no denying that women play a crucial part in today’s hip hop culture and its elements —breakdancing, graffiti art and music. They break and reshape the format, they bring a different light and style to every aspect of it, showing their side of the story, the struggles and beauty they face every day. The fact that it’s a male-dominated arena make them even more powerful and admirable. The struggles of life can be seen on both sides, male and female. For some, hip hop is a gateway to creative flow and self-expression, a place where one can truly be real and share their experiences using different techniques. Females are no different than males in this aspect and we would love to see more of them rise to the occasion. ■

This is happening at the Wellington Street Sale (Promenade Wellington, Verdun) on Sunday, June 1, 12–7 p.m.