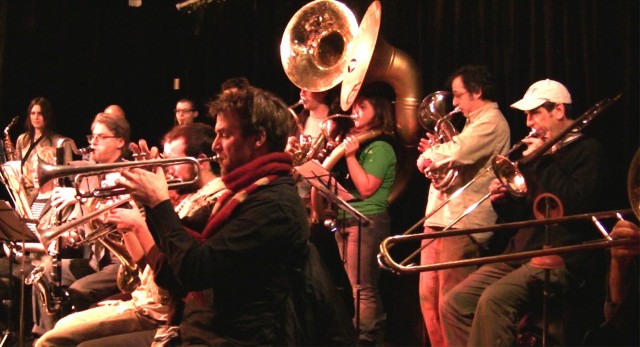 This month marks the 100th anniversary of the birth of composer, pianist and bandleader Sun Ra, one of music’s most fascinating personalities. Born Herman Poole Blount, the musician made a legal name change to Le Sony’r Ra, and as Sun Ra, from the 1950s till the ’90s , he led a group of adventurous musicians variously known as “the Solar Myth Arkestra,” “His Cosmo Discipline Arkestra,” “the Jet Set Omniverse Arkestra” and “Myth Science Arkestra,” playing music that was ahead of its time in its blending of traditional jazz, free improvisation and electronics.

Arguably as important a composer as any in jazz, Sun Ra developed a philosophy which claimed that he was from an “Angel Race” and included a visionary experience where he travelled to Saturn. This Afro-futurist mythology gained him notoriety as did the flamboyant showmanship of the Arkestra, whose members played way-out music in flashy, space-themed costumes.

For the centennial celebration, Nicolas Caloia, the Montreal bassist, composer and leader of the Ratchet Orchestra, has planned a commemorative concert that promises to be one of the highlights of this year’s Festival de Musique Actuelle de Victoriaville, which begins this Thursday, May 15 and runs until Sunday, May 18.

I spoke to him about the event at the Casa Obscura after a two-hour workshop on the music of Sun Ra.

Paul Serralheiro: How did you get involved with Sun Ra’s music?
Nicolas Caloia: I came into close contact with it when I met him up close — my friend David Elliot , a Montreal painter, produced him. David teaches painting and drawing at Concordia, and he wanted to invite Sun Ra to inaugurate the Oscar Peterson Concert Hall.

He went down to Morton Street in Philadelphia and he met them and invited them up. It would have been somewhere like ’91, ’92.  David got me to help with the show. So my first contact with Sun Ra was David called me up and said he’s coming to get me, and when I got in the car, Sun Ra was sitting in the front seat.

We hung out with the band when they did their show at the concert hall and also gave a workshop in the dance department. He had them over for dinner at his house. The music department was not very interested in having him there. You know the early ’90s were a very, very conservative time. It was funny that he was invited by someone in painting and that the workshop was over in dance. But the dance class rooms were particularly beautiful because of the acoustics. That is where he also did that piece “They’re trying to fool you, now I got to school you about the history of jazz but the history of hot jazz” — he’s got this rap that he does there — and I thought, “You know, I’ve always suspected as much.” And so I felt that I was really set straight by him. Or he confirmed some of my suspicions in a variety of ways by his example, mainly. That was when I got to hear them live —  [saxophonist] Marshall [Allen],  John Ore was playing bass, trombonist Tyrone Hill, singer June Tyson, saxophonist John] Gilmore. It was before they started to pass on.

PS: So has the Ratchet Orchestra been playing Sun Ra’s music for quite a while, or is this a new project?
NC: Oh no. Ratchet had started at the time. It was a small band doing my compositions, or sometimes it was larger, more like a chamber orchestra kind of thing — improvised chamber orchestra, acoustic and with more orchestral instruments.

But then in ’98, where the Sala Rossa is now, there used to be a tango school, and I had done a bunch of tango gigs in that room, so Sam Shalabi and I rented that place. It was called “Graffiti Tango”  or something like that, and we produced the first Sun Ra birthday there. And that’s when Ratchet got up to 16-17 members there. Nutsak opened for us. We all did some Sun Ra tunes.

PS: How did this collaboration with Marshall Allen come about?
NC: Well, I felt I had to do something for the centenary, and I talked to [festival organizer] Michel Levasseur about bringing Ratchet in to do a tribute, and he proposed calling Marshall and getting him in. So he did.

PS: You said you felt you had to do it. Why?
NC: Well, just to pay tribute, because I still think it’s interesting music, and also to mark a period of my own. I like to do things thoroughly and I think this is a nice, thorough recapitulation of his music. It shows a variety of the things he did and it also allowed me to put in some of my own stuff.

PS: What do you think is distinct about Sun Ra, as opposed to other composers you could draw on for Ratchet?
NC: Sun Ra is interesting for lots of reasons: for his independence, producing himself and releasing his own material. Recording himself, in 1953 with Stuff Smith, on a wire recorder — this was pre-tape, and he’s got a home recording studio. I mean, nobody’s got this. This is the same time that John Cage is going into the Barrons’ studio, which is often called the first electronic music studio in North America, to do William’s mix. Electronic music is in its beginning, and he’s already on it. And he’s coming from Birmingham, he’s coming from a place where his options were limited because of the culture he found himself in and he found that unacceptable and went on to create his own mythology. Everybody can use some of that. That’s just a universal, hopeful, optimistic, inspiring stance.

I also like the music. I like the fact that it’s not cool, that he lets everything through. He lets very calming stuff out, he lets very nasty stuff out, he’s very traditional with his transcriptions of Fletcher Henderson with whom he played as a very young man. He’s also open to a variety of influences. You hear world music, and we’re still talking about the ’50s here. He doesn’t have a narrow field of view. He’s looking everywhere for inspiration. He’s listening to movie music, and when he’s lifting Fletcher Henderson, he’s dead on. At the same time, he’s the first guy to have the Moog [synthesizer]. He’s got one in ’69. Moog gives him one.

PS: Some people are turned off by all the mysticism, you know, the story that he travelled to Saturn and all this kind of stuff — what do you make of that?
NC: That’s the metaphor. He created this mythology in the face of an absolutely unacceptable society, a “reality” that he was supposed to accept unquestioningly. So when you listen to him and accept that these are metaphors, that’s what it’s about, really.

The space thing is probably his response to the American space program that started in 1958, but didn’t have a black astronaut until 1983. I feel it to be more generally a refusal to “know his place” — space is the place. In European Christian mythological paintings, angels are fair-skinned and the demon on whose head the angel’s foot is resting has a “Moorish countenance.” When Sun Ra says that he is in fact part of the “angel race,” I think he is countering with his own mythology.

PS: So is he literally from Saturn, or is that kind of irrelevant?
NC: Yes, but did he have a great spirit? Did he know about the spirit? Is the spirit powerful? The music is handling incredible energies that are not quantifiable, that are not easily explained. He’s hip to that.

PS: Are you going to bring back the costumes?
NC: No. That’s not us.

PS: Is Marshall playing on everything?
NC: He can do whatever he wants. He can light the fuse, which he’s capable of doing. He can also direct us. We’re also playing tunes that he knows, so he has a variety of choices. He’s played all the music we’re playing. He’s the original voice. ■

For more about this year’s edition of FIMAV, look here.