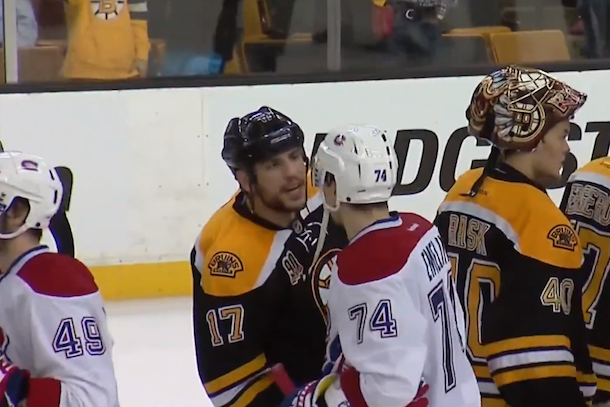 Jackakis: The man who owns all those bars you don’t like, Quebec Bar Owners’ Association prez Peter Sergakis, was apoplectic about the Bell Centre selling booze on Wednesday during their sold-out jumbotron screening of game seven, his reaction similar to that of Bruin sore loser Milan Lucic in the handshake line. He protested to the liquor board that the Bell Centre didn’t have the right license. He lost.

Soniq the EDMhog: August is going to be a busy one music-wise for Parc Jean-Drapeau. There’s Osheaga and Heavy Montreal the first two weekends, then Arcade Fire to cap off the month. Yesterday, it was announced that Île Soniq, an EDM fest, will be taking place the weekend after Heavy. The line-up will be unveiled on May 21.

Charest-ing the blame: Remember the Ménard report? The paper on 2012’s student protests by a PQ minister that was denounced from both sides as slanted from the start? Well, the report was very quietly released on Wednesday, right before the hockey game, and as expected, it concluded that it was all Charest’s fault, with some recommendations for the police sprinkled in there. The 450 page report is the definition of TL;DR.

Loving tribute: Montreal’s tight-knit music community has commemorated late musician Lhasa de Sela in many ways since her passing in 2010. On Thursday, the park between between Clark and St-Urbain was officially christened Lhasa de Sela Park. Naturally, they opened the park with a concert.

Aaaaand as you probably know, the Habs are on to the next round. They take on the Rangers at the Bell Centre for game one this Saturday at 1 p.m. ■