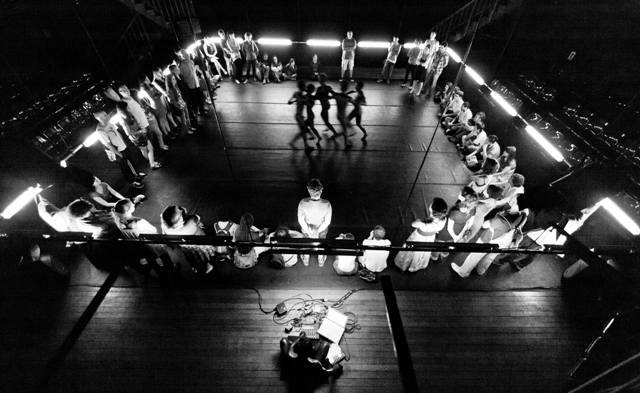 For the next 17 days, the city will be overrun by dance and theatre in Montreal’s venues, both inside and out. The eighth edition of the Festival TransAmériques showcases a healthy crop of world premieres. Here’s a round-up of what to look out for in the world of dance:

First up, Croatian interdisciplinary artist Matija Ferlin performs in Sad Sam Lucky, his one-man show that interprets the highly physical poems of prolific modernist poet Srecko Kosovel, who died of meningitis at the age of 22. (Monument-National, 1182 St-Laurent, May 23, 24)

Former rock band frontman and clothing designer Christian Rizzo shifted his focus into the visual arts and began working in choreography. For D’après une histoire vraie, the multidisciplinary artist takes traditional folk dancing from Istanbul as inspiration for his all-male cast and pairs it with two on-stage drummers as a way to merge the traditional and contemporary. FYI: It’s the first time this French choreographer shows his work in the city. (Place des Arts, Théâtre Jean-Duceppe, 175 Ste-Catherine W., May 30–31)

Montreal favourite Meg Stuart and her company Damaged Goods stops by with Built to Last.  This quintet takes place under a large planetary mobile and is set to a compilation of iconic works by 12 great composers such as Beethoven, Rachmaninoff and Dvorak. With allusions to the history of dance, Stuart describes this work as a time-travel machine. (Usine C, 1345 Lalonde, May 28–29)

If you get skittish over invasions of personal space and being plunged into the dark, maybe skip this show. In this sensorial spectacle, the audience circles the five unpredictable naked creatures whose bodies are covered with a black substance. Brazilian creator Marcelo Evelin loves to tear down the fourth wall and challenge his audience to share the space in De Repente Fica Tudo Preto de Gente (Suddenly everywhere is black with people). (Monument-National, June 1–3)

Cap Verdean choreographer Marlene Monteiro Freitas, who made an appearance at the 2012 FTA, will be sure to provoke once again with Paraíso – colecção privada, wherein she plays a goddess in a mythical, private paradise full of surreal images and a cast of frenzied male beings under her spell. (Agora de la Danse, 840 Cherrier, June 4–6)

Vogueing is at the heart of New York creator Trajal Harrel’s Antigone Sr. – Twenty Looks or Paris Is Burning at the Judson Church. Set to pop ballads, five guys gleefully strut down lit catwalks, mic in hand, and take the tragic story of Antigone and twist it into their own modern, glammedd-up version. The Bessie award-winning work is part of an eight-part series. (See our interview with Harrel here.) (Usine C, June 2–4)

In his 40-year career, local dance vet Paul-André Fortier has created just as many works. At the end of this month, he takes the stage with collaborator Robin Poitras in Misfit Blues, a duet that incorporates coyotes and addresses the absurdities of human nature. (Agora de la Danse, May 31, June 1 and 2)

The talented Catherine Gaudet’s new piece, Au sein des plus raides vertus, continues to explore the state of bodies and human relations. Creating dance from the inside out, Gaudet’s quartet toys with the tension that arises between the angels and devils within us. (Théâtre La Chapelle, 3700 St-Dominique, May 27–31)

FTA isn’t only about the stage. If you’re downtown, here’s an interesting lunchtime stop that will give you something to talk about at the water cooler. No, that’s not an IKEA playground at the corner of Clark and Ste-Catherine. At Les Thermes you can literally dive into the installation overflowing with 25,000 black plastic balls imprinted with philosophical quotes (May 22–27).

Don’t forget about the fest headquarters at the Agora Hydro-Québec du Coeur des sciences (175 Président-Kennedy) where there always events are always going on at lunch and during the cocktail hour, with late-night parties for the night owls.  For this year’s edition, take note of a special version of Short and Sweet, where the three-minute choreographic amuse-gueules are dance covers (June 5). Last but not least, stop by the closing party, complete with DJs and — you guessed it — dancing (June 7). ■