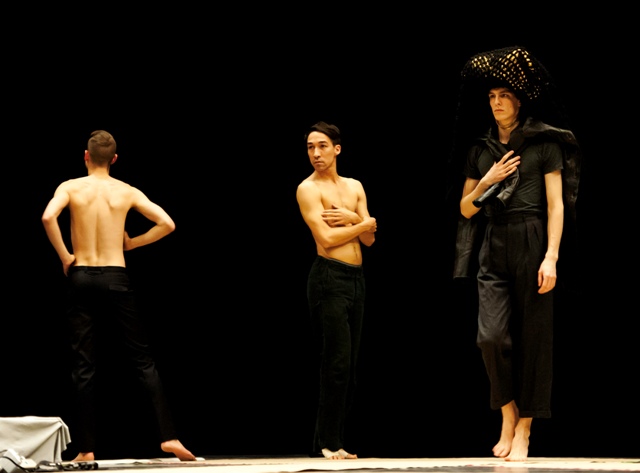 Antigone Sr.—Twenty Looks or Paris Is Burning at the Judson Church. Photos by Bengt Gustaffson

Antigone Sr. is a layered performance born out of a question posed by choreographer Trajal Harrell: what would happen if, way back in 1963, voguing drag queens trounced downtown from Harlem to visit the Judson Dance Theatre, the groundbreaking postmodern dance outfit? And what if these groups, both in their nascent stride, decided to perform Antigone, the Greek story of a woman defying a patriarchal culture?

The result is five men, including Harrell, posing, preening and competing in lux outfits to an eclectic soundtrack of pop, rap and rock. And it’s coming to the Festival TransAmériques on June 2.

“It’s an epic. The idea here was to really do a Greek tragedy the way it was originally meant to be done,” says Harrell, reached via Skype in Antwerp, where he was touring. “We call that Greek theatre realism.”

Imagining and performing this hypothetical question has won international accolades for Harrell, a Yale-educated, New York-based artist hailed as the next Martha Graham by The Huffington Post and dubbed a “thinking choreographer” by The New Yorker.

He was enthralled by voguing and house culture when he first attended an underground ball in 1998. The gay house scene, explored so well in the documentary Paris Is Burning, consists of tight-knit “houses” whose members pose and compete in ball events.

The choreographer studied the scene for years, but did not interact with anyone at the balls. That academic, outsider approach is key—the performers, including Montrealer Stephen Thompson, are white and are not of the ballroom scene (though Harrell himself is black).

“I wanted to generate and produce something I didn’t know,” he explains. “You don’t need me to reproduce voguing; you can go see it.”

Antigone Sr. is the large version of his series, Twenty Looks or Paris Is Burning at the Judson Church. Harrell developed eight different “sizes” to his show, tailored to fit different spaces and audiences.

Having performed at the 2012 edition of the FTA, Harrell says he is keen to return. “I really like the audience,” he says. “There isn’t enough exchange between New York and Montreal, for places that are so close.” ■

Antigone Sr.—Twenty Looks or Paris Is Burning at the Judson Church will be performed at Usine C (1345 Lalonde), June 2–4, 8 p.m., $37–$43, with a talkback after the June 3 performance. A screening of Paris Is Burning will take place at the Agora Hydro-Québec du Coeur des Sciences de l’UQAM (175 Président-Kennedy) on June 1, 9 p.m.