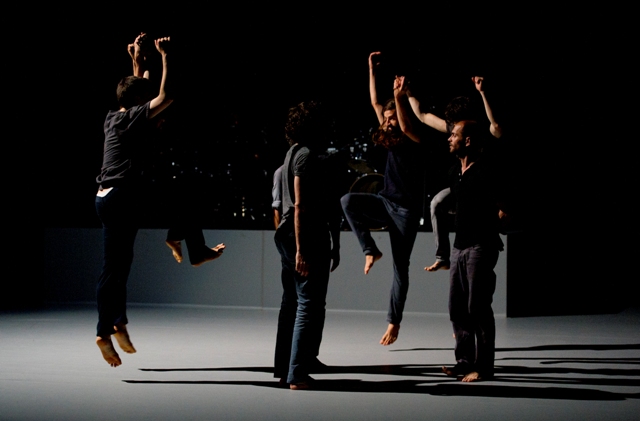 In 2003, French choreographer Christian Rizzo was watching a dance show and feeling uninspired. Then unexpectedly, before the show’s end, a gathering of male dancers burst out onto stage in a traditional Turkish folkdance, then disappeared as quickly as they had emerged. That fleeting moment, and the void it left, stuck with him. The reason why it lingered fascinated him. A decade later, he decided to use his experience of trying to recapture this hazy memory as inspiration for D’après une histoire vraie, his work for eight male dancers.

As the crowd settles in, a tall, long-haired man strolls on stage and slips off his sneakers near the edge. He crawls across the floor and two others slowly join him. Their movements are slow and deliberate and their long-limbed angular gestures trace through space. Upstage right, two long-haired drummers, Didier Ambact (a pioneer in the French industrial metal scene) and King Q4 each sit perched behind their drum kits that overlook the grey dancefloor.

The eight dancers, many of them long-haired and bearded, dressed in muted dark pants and short-sleeved t-shirts are constantly moving and filling the space as individuals. The movements, like their clothing, have a loose kind of casualness to them. Their exposed forearms form lines and angles and their bodies slowly trace complicated nomadic group patterns. The sparse set has an assortment of odds and ends in a cluster: a black circular chair, a jacket, a tall spiky plant and two dark balls.  One by one, the dancers remove these objects, opening up the grey canvas to their movements.

Rizzo, who used to be a front man in a rock band pairs the contemporary and the traditional by including live drummers in the performance. In one section, the dancers execute gentle undular movements punctuated by sharp forward bending movements that send the hair flying. These jolts of head thrashing movements that allude to a rock concert make a compelling contrast with the Rizzo’s fleeting memories of folkdance gestures of a quick side shuffle, bodies in lines with arms interlaced against backs, or hands briefly holding with swinging arms.

One of the themes Rizzo wants to address is how and when a group becomes a community. In the last section, the performers sit off to the side of the stage and one dancer takes centre in a captivating solo that left me wanting more. Each dancer slowly adds to his movement until all eight are accompanied by the growing intensity of the heavy drum beats. Gathering momentum, throughout this section, the cast becomes more playful, interactive and connected.  With arms wrapped around each other, they eventually form a tightly knit circle that moves in and out and then, with a group cry, they split apart and the audience breaks out into applause and cheers.

As I leave the theatre, a group of excited teenagers are in front of me, abuzz, mimicking the movements and talking loudly about what they had just seen.  That’s what I love about a good dance show — it really leaves a mark. ■