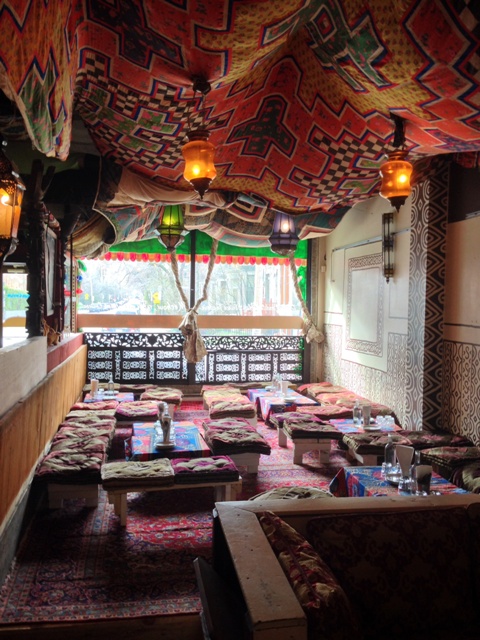 Since opening its doors in 2005, la Khaima has become a pillar of Mile End’s food scene. The restaurant was established by Atigh Ould on Parc Avenue, and has occupied its current location at 142 Fairmount since 2007, with the neighbouring Al-Boutik spice shop opening up in 2010. But as anyone who’s been to la Khaima will tell you, the space is far from your average Mile End hang-out; it’s a portal to the nomadic world of the Sahara Desert, more literally than you might think.

“I’m building my dream to have a connection between Montreal and the nomad people around the world; the music and culture and food,” Ould says. “I’ve seen people going from here to the desert and people arriving from Timbuktu to this place — it’s a bridge between these two worlds that I dreamed to create.”

In the promotion of his restaurant and the cuisine of his West African homeland, Ould has become something of an ambassador for Mauritania. A large map of West Africa is pasted to the wall near the entrance, Mauritania at its centre. The dining salons, with carpeted floors, cushioned seats, low tables and over-hanging drapery, approximate the style of the khaima, the communal desert tent for which the restaurant is named. As for the food, the main dishes are mild, slow-cooked stews — with multiple meat variations and a vegetarian option, with chick peas — all drawn from the cuisine of Morocco, Algeria, Senegal and Mali as well as Mauritania. (Ould also sells his own Hibiscus drink, a delicious, refreshing break from over-sugary sodas and juices.)

“The food is simple, natural, organic, with few spices, vegetables and meat,” Ould says, stressing the importance of the communal, social style of eating. “There are three dishes and two mezzes that we can eat with the hand, we can eat with bread, we can eat with couscous, but everyone shares and passes the plate, so people can have time with their friends, with their family.”

“This restaurant is something that I dreamed to have. When I started, I wanted to make authentic food and an authentic ambiance of the nomadic people, and it was difficult, I had to work hard. But now I’m very happy.” ■