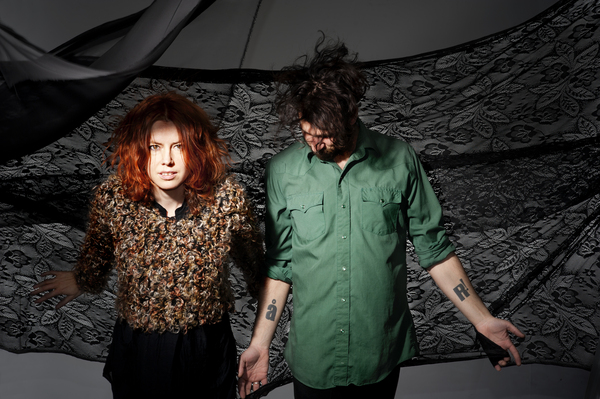 Turning Rocks is the new album by Thus Owls, out today via Secret City Records. With its adventurous approach to alt-pop composition and the vocal grandeur we’ve come to expect from them, it’s simply a brilliant piece of work, one that signals a new phase following a year of transition.

The band’s core couple, Erika and Simon Angell, used to live between his hometown of Montreal and Stockholm, the metropolis closest to her Swedish village, Orust. About a year ago, they settled here permanently and wrote a record in their Rosemont living room. And while the music took on a distinctly 514 flavour, the lyrics sought inspiration from across the ocean, specifically from Erika’s childhood home, occupied by her family for five generations.

“There’s a picture in the album, it’s a photo of a picnic that they all had just outside the house on my grandma’s grandma’s birthday,” says Erika, who wrote about family lore passed down from her grandmother, in conversations that took on a fresh intensity in recent years, as Erika gradually moved away from Sweden. She looked for parallels in their lives, and started writing about the larger theme of common human experience.

“Growing up in a place, knowing that my grandma ran in the same woods as I did, and later figuring her life out — that was a fascinating experience,” she says.

Of particular interest to Erika was the tale of her great great aunts, seamstresses who lived and worked together until one of the sisters died a mysterious, untimely death.

“She was the creative one, she came up with these amazing patterns for dresses, and the other one was the hard-working one who put them all together, she was considered the more bitter one while the other one was more happy. But the way she died defined her whole life. Sometimes the way you pass away can lean over you and remove the memory of who that person actually was.”

Turning Rocks also reflects some local history, albeit much more recent history: it was recorded at Fast Forward in NDG, the site of Angell’s first ever recording experience with the ’90s ska band Gangster Politics, which also featured Patrick Watson, with whom Angell would go on play with in the Patrick Watson Band.

Another Gangster Politics alumnus, bassist Morgan Moore (Blood and Glass), is now a member of Thus Owls, as is drummer Stef Schneider (Bell Orchestre) and keyboardist Parker Shper, brother of How Sad singer Harris Shper, who played the role of assistant engineer on the record, and is handling Thus Owls’ live sound.  And serving as lead engineer was the Shper brothers’ uncle Rob Heaney, who has previously worked with Angell via producing Patrick Watson.

Simon explains that setting was as integral to the creation of Turning Rocks as it was to the previous two Thus Owls records, 2009’s Cardiac Malformations and 2012’s Harbours.

“The first one was recorded in Sweden, the second one was recorded in France but was composed and written with musicians in Sweden,” he says. “This time around, from inception to what you have in your hands, it was all done in Montreal. It had an impact on the music we wrote, and working with North American musicians changed the sound, for sure.

“When Harbours came out, we talked about that silence that Scandinavian people have in their music and in their life. Well maybe there isn’t as much of that on this new record,” Simon says with a laugh. “It came out a little more directly.” ■