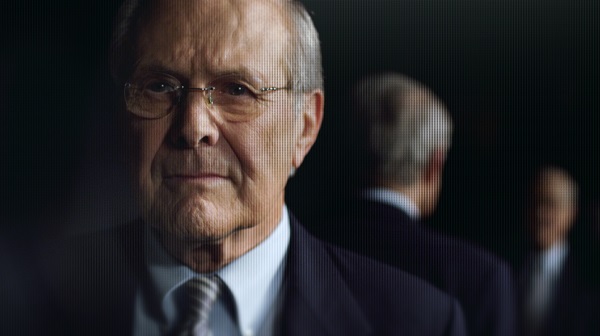 In the same month that Errol Morris’s documentary The Fog of War premiered at Cannes, May 2003, George W. Bush landed on an aircraft carrier off San Diego and declared that major combat operations in Iraq were over. “Mission Accomplished.”

The war lasted another seven years, and the weapons of mass destruction that the U.S. government claimed would be there, their excuse to invade the country and take out Saddam Hussein, were never found.

The Fog of War delved into the mind of the man who presided over the Pentagon during the Vietnam War, former secretary of defence Robert McNamara. So when Morris decided to profile his Bush administration counterpart, Donald Rumsfeld, who was part of Richard Nixon’s cabinet during Vietnam, the director naturally asked what he’d learned in the ’60s and ’70s, and why those lessons apparently hadn’t informed his handling of Iraq. He never got to the follow-up question.

“I’ll tell you what I learned from Vietnam,” says Morris, who was an anti-war protestor as a student (“[Dick] Cheney was over there in married student housing on the University of Wisconsin campus in 1969; I was on Bascom Hill being tear-gased.”) “I learned to be suspicious of political leaders and their ideologies. I learned to endlessly question evidence that was presented to me. I learned that my country could be taken to war for really bad reasons and that millions upon millions of people could die — millions of people could be slaughtered for no reason.

“What did Rumsfeld learn from it? That ‘some things work out and some things don’t. That didn’t.'”

Morris’s new documentary, The Unknown Known, takes its title from a bizarre and controversial statement Rumsfeld made during a press conference in the lead-up to the Iraq War. Perversely, Rumsfeld references the infuriating riddle in the title of his memoir: Known and Unknown.

“I’ve tried to tell a really appalling and frightening story of an extraordinarily ambitious man who in the end stopped caring about facts, about reality, and invented his own,” Morris says. “This man is bright enough to create his own anti-emperical philosophy, to tell us that evidence doesn’t matter. What matters? Imagination.

“I didn’t find evidence of WMD therefore there’s no proof that there were no WMD and therefore there was most likely WMD because I can imagine that there was, and in fact at one point maybe I even sold WMD to Saddam, so let’s just assume that there are,” says Morris, paraphrasing his subject. “This is Alice in Wonderland-type logic.”

Morris notes that some critics have attacked this film for being too easy on Rumsfeld, for not challenging him with the facts on camera. But having him voice his delusions again and again, show no remorse for launching an unnecessary war, evade responsibility for allowing torture to take place and grin like an idiot throughout gives Rumsfeld plenty of rope to hang himself.

“This isn’t Frost/Nixon,” Morris says, “this isn’t gotcha journalism. This is peeling back the layers of an onion and finding nothing; finding vanity, self-deception, self-satisfaction and an unwillingness to think about anything.

“Obama says that there’s not going to be any investigations into anything that occurred during the Bush administration, so we all know these people will never be held accountable for this. That has understandably produced incredible anger, so some people feel that I should be Donald Rumsfeld’s prosecutor, but I’m sorry, I’m doing something different. Maybe I should’ve leaped out of my chair and grabbed him by the throat, but that is not what was of interest to me. I’m interested in his mindset.”

Morris rejects the notion that Rumsfeld is a sociopath or psychopath, that medicalizing this kind of thinking is too easy, and that it removes responsibility. He sees Rumsfeld as more of an everyman than a sick person or a medical anomaly, but an everyman that became a “true believer.”

“This man created a hermetic world for himself, with his memos, his philosophies, his rules, his utter nonsense. He says that I’ve gone down the wrong rabbit hole, or I’m chasing the wrong rabbit, or whatever. But the right rabbit for me is his delusion, his self-deception, his anti-empericism. The things that made this horror a possibility.

“Can we learn something from it? I don’t know. But I tried to record it. I tried to capture it.” ■