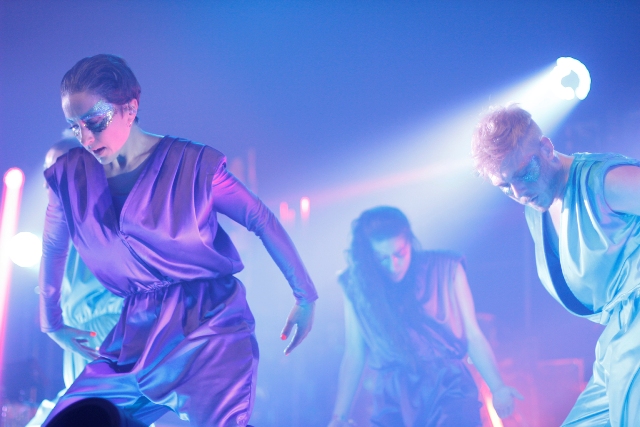 The Knife crew. Photos by Luke Loseth (scroll down for more)

As I was making my way to Metropolis Saturday night, the level of excitement and anticipation building up to the Knife’s debut performance in Montreal was highly palpable to say the least.

And it was just that: a performance.

At around 8:40 p.m., DEEP Aerobics took the stage to literally warm up the crowd with a healthy dose of exercise which wouldn’t be too out of place in your local gym. Songs by the Rapture and Goldfrapp played through the near 20-minute workout which succeeded in energizing the crowd for what was to come.

As the curtain was raised, the first rhythms of the dark, sexy and mysterious “Wrap Your Arms Around Me” instantly captivated the audience.

A collective of musicians, dancers, choreographers and performance artists joined the sibling duo of Karin Dreijer Anderson and Olof Dreijer. The Shaking the Habitual show is more than just a concert. The Knife defied all preconceptions, taking elements of theatre, vaudeville and modern dance, mixing them up and setting a precedent for what a show can be.

A lot of the audience dressed up for the occasion, wearing masks and costumes very much in the spirit of the Knife’s image, as portrayed in their photos and artwork, giving a carnavalesque tone to the night.

The first half of the show climaxed with the hat trick of “A Tooth for An Eye, ” “One Hit” and “Full of Fire” — with its red lightning and choreography, the latter suggested what Twin Peaks‘ Red Room must be like if entered in the 21st century.

After such intensity, the troupe took a breath and greeted the crowd. One of its members, Halla Olafsdottir, delivered a poignant passionate spoken word piece about unity, tolerance and positivity that I first believed to be improvised but later learned it was “The Body Possum” by Jess Arndt.

“Pass This On” and “Silent Shout” thrilled the audience as the 80-minute set came to a close.

A lot has been said about this tour ever since it opened last spring in Germany. There’s one thing you have to remember: art is about emotion. It doesn’t matter what tools you use to transmit that. What matters is whether the message is getting across, and in this, the Knife triumphed. You can look at the videos online or read what’s been written about it, but that won’t do it justice. The Shaking the Habitual show is an experience that has to be lived. ■