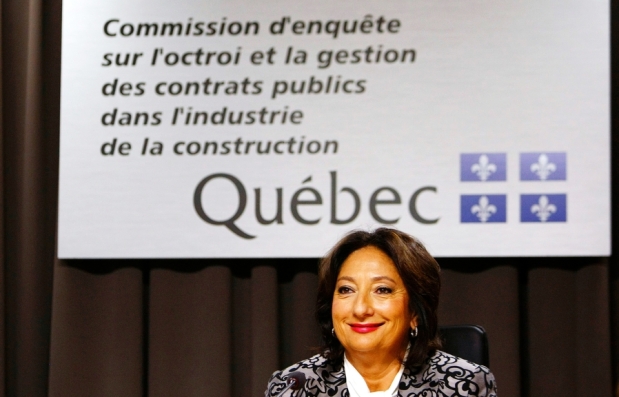 This should have been the election campaign where our political leaders convinced us that the bad old days of corruption and cronyism and opportunism were being left behind.

I don’t know about you, but with three days left to go in the 2014 Quebec election campaign, I feel like taking a nice long shower.

Let’s take a look back at some of the political highlights of the last few days, in no particular order. I’m going to rate the scandal level of each one using a method I call WWWD (What Would Wheeland Do?)

Seems like Doc Barrette had one hell of a golden parachute for his departure from the Fédération des médecins spécialistes du Québec. A cheque for $1.2-million was handed to him after he quit as president in order to run for the Quebec Liberal Party in this election. Barrette’s defence was that the severance was set by a formula that had been approved by the association membership prior to his arrival in 2006. (Three months pay for every year of service.) Coalition Avenir Québec leader François Legault went apoplectic, insisting that Barrette should pay back the funds because the 8,000 FMSQ members were able to deduct their membership fees from their taxable revenue. Legault has little credibility on this issue, though, since Barrette was a CAQ candidate in the last election. Legault now says he’d have made his star candidate give it back if he’d collected the severance before running for the CAQ. Given that Legault didn’t even consider Barrette’s active leadership in the FMSQ a conflict of interest in the 2012 election, we have to call bullshit on this one.

WWWD: I think it’s obscene that they give one man a one-time cheque that would literally take the average Canadian 25 years to earn. If I was in the same situation, though, I’d see no reason to give it back. But I’d sure as hell spread a good chunk of it around to my favourite charities, even if I wasn’t running for political office. I mean, he told reporters he hadn’t even bothered to check with his bank to figure out how much was left after taxes. How much money must you have to be so blasé about a million-dollar payday? 4/10

According to the affidavit of an unnamed businessman, Premier Pauline Marois’ husband solicited $25,000 from him in 2007 to finance Marois’s impending leadership bid. The funds were allegedly laundered through a “straw-man” scheme, where employees gave personal cheques for the maximum $3,000 individual donation cap set by PQ rules, for which the firm reimbursed them. The cheques, for a total of $25K, were then handed to Blanchet. Three other lesser cases of questionable fundraising were also part of the Radio-Canada report assembled by investigative journalist Alain Gravel. There is no evidence that Blanchet knew the funds were being funnelled through straw men or that he committed any illegal acts. Blanchet denied everything to Gravel and had his lawyer follow it up with a warning letter.

WWWD: These straw-man schemes have been used by the majority of political parties at all levels ever since René Lévesque’s PQ government made corporate donations illegal in 1977. It would be surprising if Blanchet was not aware that such schemes were widespread, regardless of whether he participated personally in collecting such funds. Marois has denied the allegations several times, but the fact that Blanchet himself refused to face reporters after the Radio-Canada report was aired sends a bad message. So even though there doesn’t appear to be evidence of Blanchet’s involvement in any illegal activity, hiding from reporters gives the scandal legs. If I were Blanchet and I was innocent, I’d face the media music to clear my name. (I’d also divorce Marois, but that’s another issue.) 3/10

Quebec’s outgoing Minister responsible for Democratic Institutions and Active Citizenship was caught being an all-too-active citizen, handing out leaflets,  campaigning and posing for selfies with students at various schools while voting was ongoing (special polls have been set up in universities and colleges). Campaigning near active polls is a violation of election laws, something you’d think Drainville would know.

WWWD: I can never make up my mind about whether Drainville is an evil genius or dumb as dirt. But he can’t be that stupid. He had to be well aware that he was effectively campaigning at or near an open polling station. Given his former job, there’s no excuse. I would never have put myself in that situation in the first place. 7/10, or 9/10 if he is eventually disciplined for it by the Chief Electoral Officer.

By now everyone knows the story about how the pioneering Quebec feminist author and actor went off the reservation last Sunday, telling a PQ brunch a strange tale of how Muslim men might take over her apartment building’s swimming pool. Considering the whole story was clearly the product of a fertile but somewhat confused imagination, you would have expected that statements from Marois and Drainville would distance themselves from Bertrand’s ramblings. Instead, the premier said she supported Bertrand, a figure the PQ has paraded around the province as the archetype of supporters of the controversial Charter of Values.

Bertrand is (or was) a beloved figure in the world of Quebec literature, art and feminism. The 89-year-old vedette has become the figurehead of the pro-Charter group known as les Janettes, recruited by Julie Snyder, the now-estranged wife of media mogul and star PQ candidate Pierre Karl Péladeau.

WWWD: It has become obvious that Bertrand’s fragility is not merely physical these days. She had become a caricature of the elderly woman afraid to leave her home for fear of strangers, making strange and irrational statements about Muslim Quebecers. Marois’s attempt to reinvigorate the Charter debate by bringing Bertrand back into the spotlight was the cynical exploitation of an elderly woman with obviously impaired judgment.  Her failure to disassociate herself from the scare-mongering flights of Bertrand’s imagination compounds the cynicism. This has been the low point of the campaign so far. I would be ashamed to have had any role in this farce, and for not putting Bertrand’s welfare and reputation ahead of my desire for re-election.  10/10

The Liberal leader was revealed to have deposited $600,000 in a bank on the Isle of Jersey while he was working for four years as a neurosurgeon in Saudi Arabia. There are two main issues here: the fact that Couillard did not pay Quebec income taxes on his earnings and his decision to place the earnings in a bank located in a jurisdiction known as a tax haven. Couillard was not a resident of Canada during the period he worked for the Saudis and argues that it was standard practice for ex-pats to place their money in secure financial institutions outside of the country.

WWWD: As in the Blanchet case, Couillard is not accused of doing anything illegal. Most Canadians working outside the country for extended periods file a “non-residence for income tax purposes” form. I would have done the same, as would any of you, while working in a country that does not levy any income tax on non-Saudis. Drainville’s contention that Couillard had a moral obligation to pay taxes here is pure political posturing. Couillard’s explanation for why he chose to bank his earnings on the Isle of Jersey, on the other hand, isn’t convincing. There are branches of Canadian banks all over the world that don’t benefit from secrecy laws. Until he comes up with a better explanation, this move will remain suspect. Personally, I’d have put my money in a French bank so that I had an excuse to visit Paris often. 5/10

Expect the parties to reach deep into their bag of dirty tricks and continue the hail of mud-slinging we’ve seen in the last two weeks. Unfortunately, in the desperate bid to win power at all costs, Quebec politicians are further weakening public confidence in an institution that has been shaken to the core. Each day of Charbonneau Commission hearings has revealed deeper rot in a system built on collusion and corruption — and they haven’t even gotten into exploring it at the provincial level yet.

There will be more than enough mud uncovered in the coming months as the hearings continue and the police anti-corruption squad gathers evidence to back eventual criminal charges. Quebec politicians and the public should have faith that the system will do what a partisan campaign cannot: expose the truth and give the accused a fair trial. ■

Peter Wheeland is a Montreal journalist and stand-up comic. His sardonic observations about the city and province appear on Cult MTL every Wednesday (and more frequently during election season). Email him or follow him on Twitter.