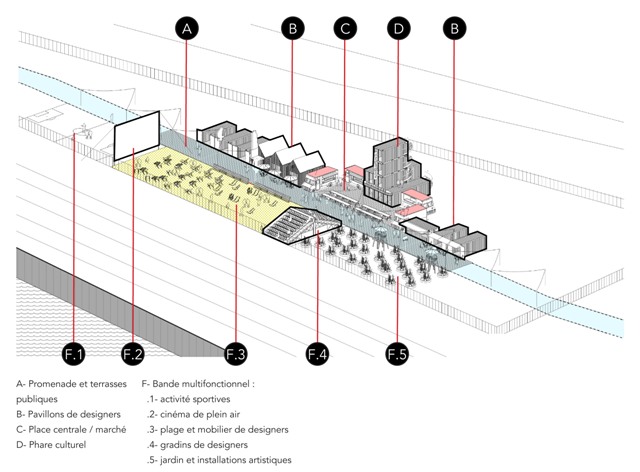 Bagnapper: Last Friday, filmmaker Jesse Freeston had his backpack stolen while he was at Café Pi on St-Laurent. The café was able to capture the act on video, so have a look, and if you have any info, send Jesse an email.

Under the bridge: An empty lot near Jacques-Cartier Bridge will host a summer-long pedestrian Village éphémère. The otherwise underutilized Pied-du-Courant prison space is expected to house the sorts of things we love in the warm months: terrasses, food & drink, pavilions promoting local goods, sports and an outdoor cinema — see the graphic above for more detail. Organizers ADUQ are still accepting proposals.

Requiem for a dilapidated gazebo: Oh Montreal! You rename a gazebo by Mount Royal in honour of the late writer Mordecai Richler, but you’ve yet to give it the repair job it so desperately needs. The $300,000 fix is expected to be completed in November. Is it too late to dedicate a stool at Ziggy’s Pub to the local literary giant?

Risky catch: One of the NFL’s most flamboyant players, wide receiver Chad “Ochocinco” Johnson, is resuming his stalled professional football career with our very own Montreal Alouettes of the CFL. Bringing tarnished or over-the-hill NFL stars north of the border rarely works out, but wide receivers are expected to be eccentrics, right? New coach Tom Higgins may want to handle Mr. HuitCinq with kid gloves.

Cryptopiastres: It seems like everyone is getting in on the cryptocurrency bandwagon, so it makes sense that someone would create a Bitcoin-equivalent in the name of Quebec and its dreams of fiscal independence. We’re guessing even the most ardent sovereigntists won’t be trading in their real-life Queen Elizabeth bucks for Québecoin just yet.