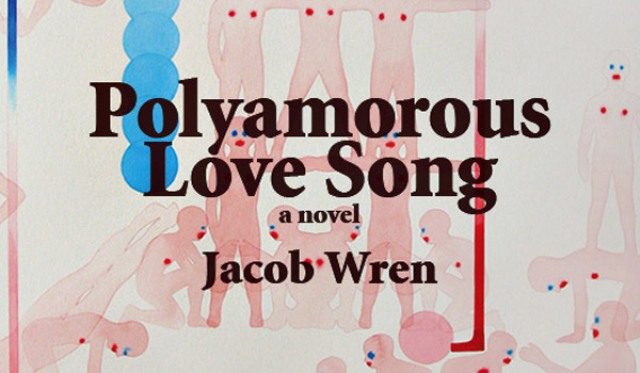 Ever wonder what it means to be an artist or to make art? Like, really wonder? If you haven’t, that’s okay (and if you have, even better!) because Jacob Wren is wondering about it for us. His latest novel, Polyamorous Love Song (Book Thug, 2014), examines art as a discipline, a performance, a political tool and a way of life.

At once thoughtful, thrilling, terrifying, comedic and disturbing, Polyamorous Love Song is difficult to describe when it comes down to it. That’s not a bad thing. Yes, it’s a novel, but it reads like a collection of connected short stories, rocketing between parody, fable, and even manifesto. It follows the secretive activities of a violent furry-mascot-wearing political group, the leader of a filmmaking movement that sees filmmaking as living life itself, the writer of a book about Hitler having sex with a dog, the writer of another book regarding conspiratorial orgies and the passing of a sexually transmitted disease from the political left to the political right. One reviewer calls it an instruction manual for a cult. Are you intrigued yet?

You may know Wren, a Montreal-based writer, not just from his other writing (Unrehearsed Beauty, Families Are Formed Through Copulation, and Revenge Fantasies of the Politically Dispossessed), but from his performance art, which also often makes the status of contemporary art its focus. He is the co-artistic director of Montreal-based interdisciplinary group PME-ART. In an interview, he says that when he’s writing, he’s not only in dialogue with literature “but also with visual art, theory, performance, cinema. One of my desires for 21st century art is that more of the barriers between the disciplines continue to break down.”

Certainly, Polyamorous Love Song is a book the breaks such barriers down with alarming alacrity, as any work of the avant-garde is wont to do. Besides adopting an elusive, complicated narrative form that hardly fits its title at all, the novel makes you think about visual art, film, writing, and performance, all under the same creative umbrella and held to the same standard of political responsibility. Wren asks us to re-evaluate our assumptions about the art world and the business of making art.

When making art about art, things get as meta as any cultural theory geek could hope. But this is not a book to add to the dandy-led Art for Art canon. In the same interview, Wren states, “I [don’t] think all art has to be explicitly political – in fact, the politics of Polyamorous Love Song are highly ambiguous, difficult to pin down – but I definitely want to feel that the artist is thinking about the larger world, that something is at stake that goes far beyond aesthetic questions.”

In fact, if there’s one thing that’s constant throughout this book’s captivating irregularity, it’s the utterly earnest question of whether artists have a responsibility towards their audience, and to the world, to make it a better place. This question echoes throughout, but especially in Filmmaker A’s class on living as avant-garde filmmaking, where a disbelieving student critiques her teacher by pointing out that Filmmaker A is not really making a film, but simply living her life. Filmmaker A accuses her student of having too narrow a definition of filmmaking. The student closes her argument:

“The thing is I believe you, I believe that you’re sincere, that you’re living your fine, exciting life and really believe this great, dandy life you’re leading should be referred to as filmmaking…the problem is there is nothing more sad, more pathetic, than utter sincerity in the service of a lost cause.”

We are left questioning whether this student indeed possesses a definition of film that is too narrow, or whether her definition of art and the avant-garde is invested in something else entirely: a cause.

So what constitutes a lost cause? And do artists, in particular, have a responsibility to choose their causes wisely? These are the kinds of questions Polyamorous Love Song will haunt you with, especially if you are at all involved in or intend to be involved in the process of making art.

At times, didactic, it’s hardly dogmatic. In fact, it is hard to tell whether Wren is writing a love letter to or critique of the artistic community. But it is this concern with the political, real-world power of art that saves this book from the more abstract, egoist realm of aesthetic musings, bringing it crashing back down to Earth in a refreshing way. If you like the sort of reflections on media, art and society offered by Chris Kraus, David Foster Wallace, Marshall McLuhan, and the surreal, modern fables of Jesse Ball and Jorge Luis Borges, you’ll like Jacob Wren’s Polyamorous Love Song. ■