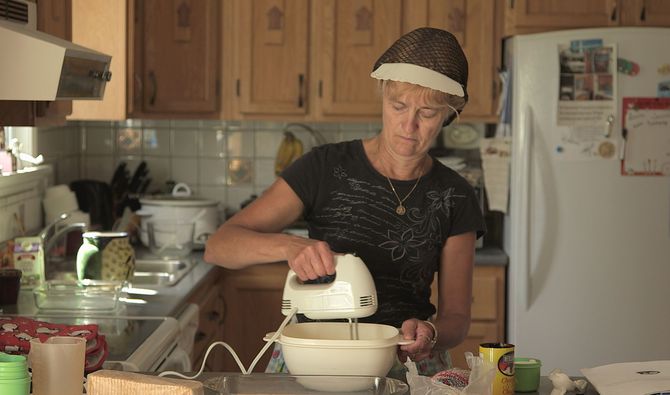 For almost 100 years, women’s association Les Cercles de Fermières du Québec (CFQ) — founded in 1915 by the provincial agriculture department — has been thriving. The different groups which seek to improve the lives of women in rural areas are led by volunteer members who encourage the sharing of ideas, activism and education — and at the moment they boast over 37,000 members.

For her first feature-length documentary, Fermières, which was chosen as the closing film at 2013’s RIDM (Montreal International Documentary Festival), local director Annie St-Pierre immersed herself in their world for a year to explore their sense of identity and to find out what really goes on at the CFQ.

Before you assume that the result is a film filled with elderly women knitting and baking, I have to stress how subtly moving and impressive the film really is. St-Pierre captures the vitality and enthusiasm of these women who give you a brief glimpse into their lives, giving you access to a subculture that arguably has had a great effect on the women in this province.

I spoke to St-Pierre last week about the CFQ, the role of feminism in the association and her next project.

Kayla Marie Hillier: What interested you about les Cercles de Fermières du Québec? Why did you decide to make a documentary about the association?
Annie St-Pierre: It’s really because my grandmother was in the association and I heard about it so much when I was young — but my grandmother was not a real farmer. So, it was kind of a myth and really mysterious that she always said, “I have to go to the farmer’s circle,” and she wasn’t one. I wanted to know what it could be when it’s called “farmers” and it’s not actual farmers.

I come from Rivière-du-Loup near Gaspésie and I heard about the association often in the local newspaper or local radio, everywhere that offered community news. It was also just from attending some of the events they organized — but we didn’t really know what they did when they were together.

I really like les mondes parallels (parallel worlds), some small universe that you think you know but when you’re in it you discover that you really didn’t know what it was. It’s a part that I really like, to be able to go into some little universe, into that world. That was the beginning of my interest.

KMH: Was there anything that surprised you while you were filming?
ASP: I knew that I wanted to demonstrate the fun that they have when they’re together, the party ambiance that they can have. I think that when we film older people — and I don’t want to say that they are all elderly, there are some young women in the association, too, but it’s mostly older women — usually we focus on how they’re wise or calm people, or you would assume they would be boring. But those women are full of patience, they really like what they do and they have real talents. I like that they find a place in the world that still caters to their talents and it is important to find that. I think that there are a lot of manual talents that are not celebrated. I guess it didn’t necessarily surprise me, but impressed me.

And the other thing is that being in those circles for so much time, I kept asking the question: what traditions should we keep and which should we let go? And for sure I don’t have the answer and it’s to every generation to answer that question.

KMH: How have people reacted to the film thus far?
ASP: When it was presented at RIDM, I was so moved by a guy that came to talk to me from Ireland. He just spoke English and he just saw the film and he was crying and he told me that it reminded him of his mother and his grandmother that they were just the same.

It’s so good to know that there are some universal things in such a local film. I like when people from other countries can understand what it is.

KMH: Do you think that feminism plays a role in the association?
ASP: The feminist question is really delicate. I think it’s a kind of feminism. For sure at first it was a really big step for them. That was the only way to be together just women. That was also the only way to get out of the house. It provides a lot of techniques to have a better life in the country so it was also like a women’s school adapted to their needs and adapted to what they can learn in order to have a better life. The only school that you could attend at the time was for the wealthier families. It also helps with their identity. When you are together you can say that women are a group and that you have an identity together. You’re not just lost in your house with your husband and four children. We are a group and we can ask for things that we need, we can talk with a bigger “we” (nous).

When the ‘60s arrived and the Quiet Revolution, it was difficult for them because it was another generation of women. When you have to incorporate what it was before and you have women who are 50 and 60 years old in your association, you can’t do everything you want at the same speed as new associations. It was difficult for these women to follow the movement. They’re quite heavily involved with the church because their locals are often in the basements of churches. They often follow what the church says and most of them were housewives and the association defended the rights of women to be housewives.

It was kind of a little war between feminism and the housewives because they just wanted to be what they were. They didn’t come to define themselves as feminists because the feminists were saying that they had to go get their own jobs, get away from men. These women liked being at home and it was their right to stay there. They ended up siding with housewives because it was the only place where they felt comfortable, they could use their skills and it was where they fit in the world.

KMH: Have you already begun your next project?
ASP: I don’t want to say too much because I don’t know if I’ll have the funding to be able to do it, but, it’s another documentary. A more experimental one and it’s in the city this time. ■