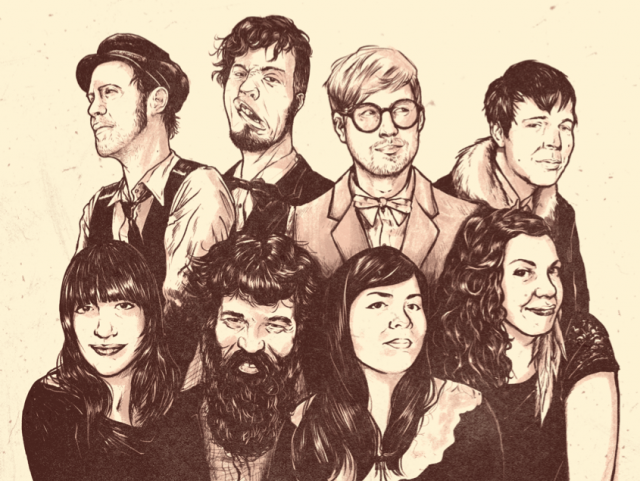 Canailles. Illustration by Thomas B. Martin

Upon turning what used to be an excuse to get drunk while playing each other’s blues, bluegrass and Cajun tunes into a bona fide working band with their 2012 debut Manger du bois, local eight-piece Canailles jokingly vowed to call their follow-up L’album de la maturité (The Maturity Album). That was of course in reference to the bullshit that pop stars tend to spew in the media when promoting their music. They had a record deal with Grosse Boîte, they were the object of an enviable buzz, but they were NEVER going to surrender to the lame ways of the MOR!

Two years on, that still stands true, but singer Daphné Brissette shows more understanding of such clichéd sound bytes. “We’re gonna have to come up with a clever answer to that,” she quips when asked if Ronds-points is indeed “the maturity album.” While songs about booze, farts, freaking out and missing flights hardly qualify as “mature,” Brissette admits that two years on the road does drive some sense in you.

“It really does change your perspective,” she says. “In two years, you listen to a lot more music. You find out about other bands around you. You widen your horizons. You change and your music changes. We had to try another direction. We’re still going for the swampy Cajun feel, but we tried to make it a lot more…” She never finds the end to that sentence. “There’s a lot less of just me, let’s just say.”

“Being on tour is a whole other way of living. There’s no real opportunity for writing new material, so we wrote the new songs all in two weeks at Erik’s cottage. It’s real short, but we didn’t have much choice. We thought: we’re a team, so we’ll just work together,” explains Brissette.

The result, according to the singer, is a slightly darker record. “We’re not a depressive band, we’re an emotional band, and we make it our mission to express it fully!” she laughs.

“Maturity” does have its perks, however. For Brissette, it’s the ability to anchor one’s music in something that’s more time-proof. “I’m really crazy about Nick Cave, 16 Horsepower, things like that. There’s a mix of sadness and rage in there that I never get tired of over the years”, she explains. “I tried to get some inspiration from that. I don’t recognize myself anymore in some songs off our first album. I’m hoping I can identify more with the new ones in the long run.”