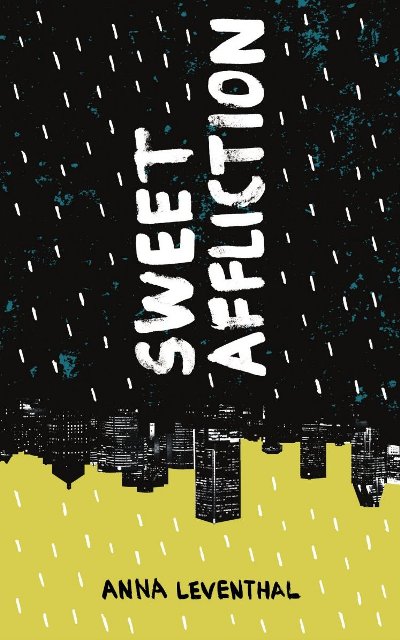 Anna Leventhal, one of Montreal’s quietly beloved literary personalities, has released a new book of short stories that pull the rug from under modern life, leaving it exposed and uncomfortable, yet strangely familiar. Montreal readers especially will recognize themselves in at least one of the local cast of characters, represented by Leventhal in a shockingly wide range of narrative voices, from teenage lesbian, to veteran squatter, to brain tumour patient and beyond. The stories that make up Sweet Affliction (Invisible, 2014) are technically fiction—some even border on bizarre—but they tend to possess that authentic quality that confirms their previous existence in the archives of lived experience.

You might recognize Leventhal from her short stories in Geist and Maisonneuve, or as the winner of a Quebec Writing Competition award, the editor of an anthology of short fiction called The Art of Trespassing, or, as I came to know her, from an awesome essay about Buffy the Vampire Slayer that went mildly viral in 2013. In that essay, Leventhal addresses the subject of “quirkiness”—a term that so-called “different” girls, like Buffy, can’t seem to escape, and which undercuts these girls’ ability to stand outside the male gaze, even though they reject the idea of being placed there. In an interview with Sheila Heti, Leventhal lists “quirky” as her “aesthetic horror,” admitting that it is an adjective she will be “dealing with” for a long time.

Again, “quirky” surfaces in the stories of Sweet Affliction, but only insofar as Leventhal actively strives to escape it, and successfully so. A moment that could easily feature an adorably manic Zooey Deschanel or Jennifer Aniston taking a pregnancy test at a wedding instead stars the kind of “different” girl that makes dudes uncomfortable rather than hot—that is, the teenage lesbian. And that’s not even all. The so-called manic pixie dream girl of the story, the narrator’s sister and petite objet A, is revealed in the most unflattering of lights: affected, shallow, cold. Her irresistibility is shot through with hints of incest, and suddenly “quirky” is a word that doesn’t even apply anymore.

Another standout piece is “Moving Day,” Leventhal’s homage to and dystopian rendering of Montreal’s favourite civic holiday. Beginning with a romanticized description of the day that most of us will recognize as “a festival of exhaust, sweat, lifting, garbage, boxes, masking tape, primer, longing and anticipation,” Leventhal quickly moves to describe alternative experiences of the holiday, ultimately exposing the fact that our own romantic treatments of this day are made possible only by our class, and are additionally implicit in an escalating system of gentrification. Through Leventhal’s sharp eyes, we get to see what moving day means for squatters, scavengers, homeowners, rioters, movers and refugees. Suddenly that quixotic introduction seems silly. What’s cracked linoleum to not being able to make rent at all?

This is something special about Leventhal’s writing: While many other Montreal writers fall prey to romanticizing their city, Leventhal is fearless when it comes to exhibiting its flaws and how screwed up that whole tradition of idealizing cities is, anyway. ■