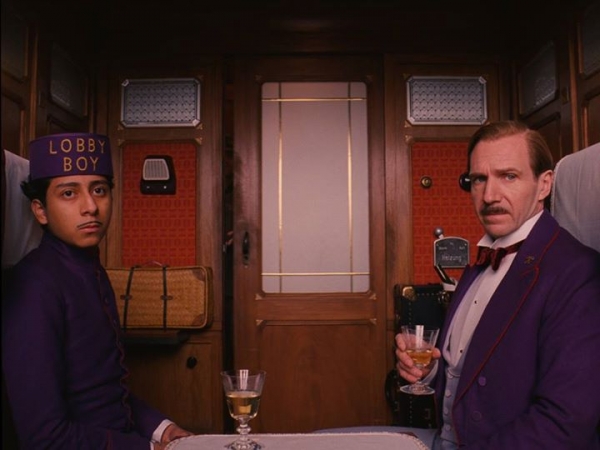 For a long, long time, I was a staunch defender of Wes Anderson. The common criticisms of his films (that they’re fussy, saturated in quirk, bereft of emotion, etc.) seemed insane to me, their dismissal almost like a slap in the face. When I saw Moonrise Kingdom in 2012 however, a shocking twist occurred: I found it fussy, overly quirky and emotionally chilly. Anderson made the same film that always bowled me over, and yet nothing happened. I approached his latest effort with more caution. If I found The Grand Budapest Hotel to be equally disappointing, it would almost certainly mean that I had lost the happiness that once filled my now-dark, calcified heart, and I could look forward to 50+ years of miserable sorrow and yelling at kids to get off my lawn.

The Grand Budapest Hotel is hardly a radical departure for Anderson. In fact, his style has become so developed and specific that it’s hard to imagine what a radical departure would look like (characters wearing solid colors?!). Yet, as much as it superficially appears to be another chapter in Anderson getting lodged more deeply up his own ass, The Grand Budapest Hotel is a rollicking but nevertheless affecting adventure comedy that draws from the wartime thrillers of Carol Reed and Ernst Lubitsch’s comedy of manners — filtered through the tweedy, micromanaged deadpan aesthetic we’ve come to expect from him.

The story of the Grand Budapest is recounted in 1985 by a writer (Tom Wilkinson as the older writer and Jude Law as his younger self) who shares his experience meeting with millionaire philanthropist Zero Moustafa (F. Murray Abraham as the older Moustafa and Tony Revolori as his younger self) in a once-decadent resort hotel in the fictional Republic of Zubrowka. Moustafa regales the writer with the story of how he became lobby boy under the notoriously fastidious and devoted M. Gustave (Ralph Fiennes) in the 1930s.

Bon vivant and admirer of the finer things in life, M. Gustave is also something of a ladies’ man with the older female clients staying at the hotel. His torrid relationship with the elderly Madame D (Tilda Swinton) leads to his inheriting a priceless painting upon her death. This really pisses off her villainous son (Adrien Brody), who sends his terrifying henchman (Willem Dafoe) after M. Gustave and young Zero, who are also of interest to an SS-like military officer (Edward Norton) and forced to scurry through the Zubrowkian landscape to save their hides.

Anderson’s films have always had a literary quality to them with their upper middle-class settings and their prosaic dialogue, but The Grand Budapest Hotel is the first of his films that feels like it probably started off as an idea for a novel. Its Russian-dollesque structure is quite probably its weakest point, adding enjoyable but probably unnecessary layers to what’s a meticulously crafted old-school adventure film with impeccable performances and Anderson’s typically deadpan sense of humour. He hasn’t made a film this zippy and action-packed since The Life Aquatic With Steve Zissou, but even that film doesn’t have anything quite like the ski-chase that Zero and M. Gustave find themselves in.

With what’s probably his most extensive cast yet (that’ll tend to happen if you add people to your rep company with each film), Anderson delivers more of the same in an irresistible package. As intricate and symmetrical as the finest-crafted cuckoo clock, it’s simultaneously the most Wes Anderson movie he’s delivered so far and the most surprising (not to mention most violent!). If nothing else, it confirms that I have retained the capacity to feel joy for at least another couple of years. ■