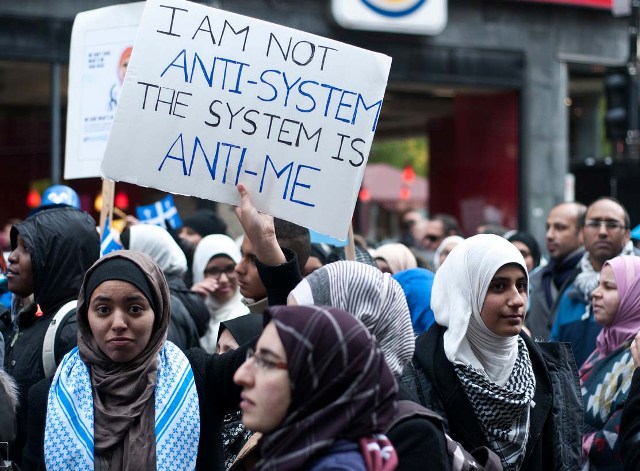 The Parti Québécois has been positively bristling these days at suggestions that some of their policies would be embraced by France’s Front National or the right wing of the U.S. Republican Party.

Those are not the images that PQ activists have of themselves, members of a party that is billing itself in this election campaign as “more welcoming” (than who, they don’t say).

In a radio debate on Monday, the left-wing Québec solidaire’s Andrés Fontecilla said he would like to remind Bernard Drainville, the minister responsible for the PQ’s proposed Charter of Values, that “the theme of secularity was appropriated by the French right, even the extreme right, (former French president Nicolas) Sarkozy and (Front National leader) Mme Marine Le Pen.”

Drainville was so upset that he demanded an immediate apology, but Fontecilla stuck to his guns. Not long after, Drainville demanded an apology from QS co-spokesperson Françoise David, who bounced the ball back to Fontecilla. “We don’t need any lessons from the Parti Québécois,” he responded. “They should clean up their own backyard.”

That was a direct shot at PQ candidate Louise Mailloux, whose past anti-religion writings have compared the baptism of infants to rape and charged that kosher and halal food is just a scam for rabbis and imams to raise money for political activities.

Not only has Marois refused to condemn the writings of Mailloux, a CEGEP philosophy teacher, the premier even said she respects Mailloux’s point of view.

Unlike another PQ candidate, whose posting of a “Fuck Islam” photo on Facebook led to his withdrawal from a race he had no hope of winning, Mailloux is one of the PQ’s star candidates and is trying to take Montreal’s Gouin riding away from QS’s David. That has made her untouchable despite a rhetoric that — dare we say it —  would look great on a nice embroidered throw pillow in Marine Le Pen’s living room.

Although the PQ has insisted the Charter of Values isn’t designed to target Muslims — or to capitalize on anti-Muslim sentiment — it seems like almost no one believes them, not even Charter supporters. Two weeks ago we mentioned a poll that showed most francophones agreed the Charter was fostering a backlash and that it specifically targeted Muslim women.

Now two more polls show widespread mistrust of Muslims in Quebec, with a Radio-Canada survey indicating 53 per cent agree with a statement that Muslim fundamentalism is a threat in the province (“Il existe une menace intégriste musulmane au Québec.”). Only 36 per cent disagree. The gap between francophones and non-francophones in the survey is huge, with 61 per cent of francos saying they believe there’s a threat versus just 18 per cent of non-francos.

In the aftermath of the 9/11 terrorist attacks, Republican President George W. Bush was quick to quell anti-Muslim sentiment, making a remarkable speech in a Washington mosque where he said:

“The face of terror is not the true faith of Islam. That’s not what Islam is all about. Islam is peace. These terrorists don’t represent peace. They represent evil and war. When we think of Islam we think of a faith that brings comfort to a billion people around the world… . America counts millions of Muslims amongst our citizens … and they need to be treated with respect… . Women who cover their heads in this country must feel comfortable going outside their homes.  Moms who wear cover must be not intimidated in America. That’s not the America I know. That’s not the America I value.”

Even after nearly 3,000 Americans lost their lives in a deliberate act of terror mounted by Islamic extremists, the U.S. president fought to counter fear and prejudice against Islam.

Compare that to Quebec, where the worst offence for which Muslims have been blamed was a request to “hold the pork” at a sugar shack meal seven years ago. Nevertheless, here’s what Pauline Marois said in reaction to the Radio-Canada poll:

“We shouldn’t exaggerate the phenomena, but there is a risk. We’ve seen it. There are some representatives of fundamentalists of that religion who have come to lecture or meet people in Quebec. There is cause for concern.”

Given an opportunity to dispel widespread ignorance and fear, to urge respect for fellow Quebecers, Marois instead chose to bolster that fear.

So maybe it IS unfair to compare the Marois PQ to Republicans, at least Bush Republicans. The PQ is acting more like Tea Party Republicans, who have sponsored all sorts of anti-Muslim legislation in the U.S., milking and encouraging baseless fears of a fundamentalist Islamic takeover and the imposition of Sharia Law.

Liberal leader Philippe Couillard’s response was hardly an appeal for compassion or reason either, but it was more measured than Marois’s. He told Le Soleil. “We’re not sheltered from it, but it’s not at our door. That’s why (the Liberals are proposing) a list of actions we intend to take to deal with the phenomenon, which is not a major (problem) here.”

“Not a major problem here” is a bit of an understatement. Islamic fundamentalism is certainly a concern in countries with large Muslim populations and widespread anti-Western sentiment, but it doesn’t export very well to a society where Muslims make up 3 per cent of the entire population.

Yes, all this Charter hysteria over a population of less than 245,000, one-third of whom were born here and 60 per cent of whom never even step foot in a mosque. Most of the 18 per cent who do attend regular services aren’t any more fanatic than my parents, who still go to Catholic church every week and volunteer in all sorts of parish functions. That does not mean my parents support the protection of pedophile priests, any more than mosque attendance is an endorsement of Islamic terrorism.

That the Charter is painted as some sort of weapon in the fight against fundamentalism is absurd. It targets a small minority of Muslim women who dare apply for work in the public system. These are not the wives and daughters of radical Islamic misogynists — duh — but women who are seeking the means to increase their own independence and sense of self-worth. The very women who embody gender equality are the ones being told by our government to take it off or lose their jobs.

All this in order for the PQ to appear like it is cracking down on religious Muslims, Sikhs and Jews.

Yet to the average Quebecer, it’s Muslims who can’t be trusted. ■

Presale season passes are available at a 25% discount until Dec 10.