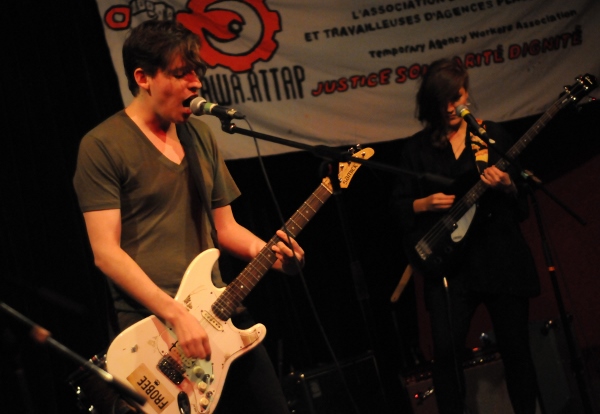 Passovah Productions, the small local show promotion entity run by Noah Bick, is marking its sixth anniversary this weekend with one of its signature two-day showcases of supafine local bands.

In previous years, Passovah’s mini-fest has usually taken place in small bars like Il Motore and Casa del Popolo, but this time Bick chose to take the event to cozier confines at Van Horne & Waverly, where the capacity is capped at 200.

“The venue brings with it a really comfortable vibe, especially when you’re trying to do shows during the day, which is something that I like to do,” Bick explains. “The idea of seeing Caroline Keating play at 5 p.m. in a space that feels like someone’s living room is a lot more appealing than if it were in a bar.”

Keating opens the event on Saturday, and Slight closes things out with a midnight set on Sunday night. Unless you’ve been keeping a close eye on the local scene, you’re unlikely to recognize a lot of the names on the bill — Technical Kidman and CTZNSHP probably have the most visibility. But look closer and you’ll see members of Suuns and former members of gone but not forgotten acts like the Unicorns, Sunset Rubdown and Parlovr doing new things.

“Our five-year anniversary show at Il Motore last year was like ‘Bam! Look who the fuck we got,'” says Bick — hear a playlist of that line-up’s bands here.  “This line-up is more sleeper-ey. A lot of these bands haven’t played that many shows, and a lot of them are not very well known.”

Among the acts that Bick is most excited about are ex-Unicorns/Clues singer-songwriter Alden Penner and Holy Data, featuring Jordan Robson-Cramer and Alex Cooper, alumni of Sunset Rubdown and Parlovr, respectively.

And let’s not forget the DJs: on Sunday it’s Miracle Fortress (Graham Van Pelt) and Dee Selig (aka Pop Montreal’s Dan Seligman), playing throughout the night. And Saturday promises to wrap with a serious dance party.

“I encourage people to stick around on Saturday night cos there’s a great DJ that a lot of people may not have heard of: Tamika, who does those Cousins parties,” Bick says. “She’s a killer DJ — she’s gonna just bring it.” ■

Tickets (per day) cost $10 at the door, or $8 in advance (available here until noon on the day of each show).