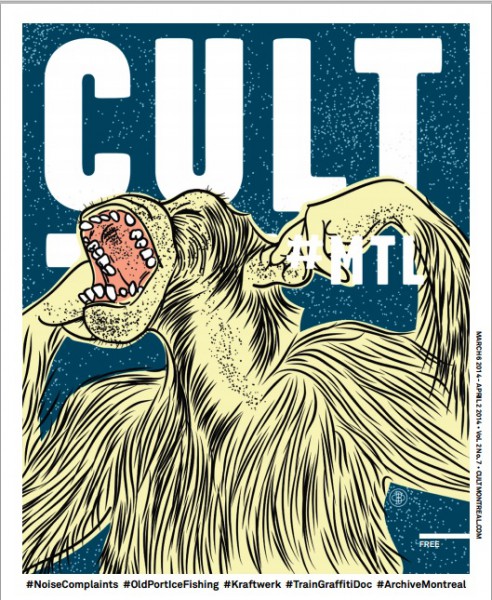 The cover of the March edition of Cult MTL in print. Illustration by Nik Brovkin

[This is an expanded version of our March cover story. Find us in print here.]

Have you heard? There’s been an uproar among musicians and bar owners and their neighbours in the Plateau and beyond, and the issue is noise. It’s not a new concern for the Montreal scene. Four years ago, the city and the cops cracked down on 15 large music venues by raising noise fines so that they’d have a corrective effect. Project Noise, as the endeavour was called, was criticized because these fines were also applied to more financially vulnerable small businesses, but some of these same venues chose to put money towards soundproofing, and in the case of one bar manager we spoke to, that did the trick—they haven’t had to deal with a complaint ever since.

Then one Tuesday last October, a show by the Kalmunity Vibe Collective at Bobards was shut down by the cops because a neighbour complained. This action, and the reaction on the part of one of the band members, brought the cohabitation conflict to the fore once more.

“This started as me as an artist venting some rage and asking people to write some letters to [Plateau borough mayor] Luc Ferrandez,” says Kalmunity’s Vincent Stephen-Ong, who launched the Save the Plateau/Sauvons le Plateau campaign online the very night of the Bobards incident, which is far from isolated.

Since then, a number of bars in the Plateau and even downtown (who shall remain nameless, by request) have attracted complaints, cops and fines. In one case, a disgruntled would-be patron called police on a venue after they were turned away for refusing to pay a cover charge. Just days before we went to press, a petition was filed against a popular nightclub, its neighbours hoping to have the place shut down entirely — the owners of that club suspected that most of the noise was actually coming from a neighbouring establishment’s techno night, and rumours were already circulating that that place is on the brink of closure due to pressure over complaints.

THE PROBLEM WITH COMPLAINERS & COPS

Closure is a real possibility for establishments that are fined repeatedly — remember Main Hall, the venue on St-Laurent just south of St-Viateur that was shut down almost singlehandedly by a sound meter-wielding yuppie doctor who’d bought a condo on Clark?

Of course this all begs the question: why move above or behind a bar on a street like St-Laurent if you’re sensitive to noise? This is why Save the Plateau’s mantra has become “complain about the complainers.”

“I think there should be a dossier on noise complainers,” Stephen-Ong says. “If my downstairs neighbour complains every time I move a chair or turn on the TV at a reasonable volume, it’s like, dude, we live in an old building, this is our reality. But if the police are called, they go straight to the source of the noise and harass me instead of going down to the complainer and saying, ‘You’ve complained 30 times about all your neighbours, this is ridiculous.’”

Stephen-Ong has spent most of his time on the issue consulting with bar owners, musicians, acoustic experts, the city, the head of the Quebec nightlife association and members of the Reseau des Scènes Alternatives du Québec (RSAQ) about how to fix this problem. He’s been working on a petition, and a proposal.

“The petition that has been reviewed by lawyers but after speaking to an acoustic engineer, I put a pause on that because he gave me a lot of insight into what would actually work in the real world and what would not,” he says. “I want to discuss that at length before I release this petition. I want to release something that’s quality, not something that a lawmaker would look at and say, ‘Well, this is bullshit. This doesn’t make sense.’”

As for his practical proposals, Stephen-Ong insists that his intent is to make this process easier for everyone involved: the proprietors, the musicians, the neighbours, even the cops.

“The police get flack over the way they handle complaints, but maybe they don’t like dealing with it at all, maybe they’d rather be investigating actual crime,” Stephen-Ong says.

One bar manager I spoke to described the noise complaint process this way:

“A noise complaint is called in, then the police come, and if they can hear any music or bass from outside the bar, they issue a ticket.

“The thing is, the music is always at the same level and about once a year they come and give us a $1,200 ticket, seemingly for no particular reason,” she says, noting that the police have the option to fine the musician or DJ $300 (a fine that her bar, at least, would cover), but they invariably opt to fine the bar four times more.

Stephen-Ong suggests cutting the cops out of the process entirely:

“It should be handled the way we handle restaurants, with health inspectors. Have noise inspectors and have public records of who has caused more infractions than others, who are problematic venues.

“In terms of the actual source of the noise, when you get a noise complaint, don’t go to the venue, go to the person who complained and do a decibel meter reading. I’d like to see a mandated limit, not for the sound on the street or in the club, but in the neighbouring residence,” he says. (At the moment there are official, accepted decibel limits for live music and bars, in an ordinance that dates back to 1977, but they’re very low, and aren’t enforced because police don’t have sound meters.)

“And then this is the tricky part: how much of the responsibility for reducing that noise is on the part of the venue or the producer of the noise, and how much is the person living in that space?”

THE CITY STEPS IN

Ahead of his petition and the official roll-out of his proposal, Stephen-Ong was happy to see that the city is invested in working towards a solution as well.

Plateau city councillor Christine Gosselin explained to me that in the last week of February, Projet Montréal voted to create a new permit that would allow venues that share building space with residents to get around the noise bylaw that’s currently on the books. That bylaw forbids spaces in semi-residential buildings from acquiring show-bar licences, and that is the local scene’s dirty secret: many of the small venues we frequent, including Bobards, are not licenced to operate as showbars. They can still host live music, but are technically forbidden from promoting their concerts and charging cover.

“If you have a bar, some guy can come in with a guitar and play, that’s not against any rules — how’s that different from having piped-in radio music? It’s not,” Gosselin explains. “But then the guitarist becomes a trio and then the trio becomes Kalmunity Vibe, and there’s 14 people on stage. Then you’ve outgrown this concept where you can have a ‘spectacle accessoire au bar.’”

The proposed new permit will only be attainable if certain conditions are met, and these will likely include the installation of soundproofing, noise-limiting technology and heavy doors and windows. “This is what we have to work out: what is reasonable to expect, what is reasonable to demand and how we go about making this new permission acceptable to the larger community.”

The bar manager I spoke to, exasperated over a recent $1,200 fine, told me that the sound-limiting they’re investing in will cost $3,000, and full soundproofing for her small space would’ve cost an exorbitant $25,000, which isn’t even an option.

When asked about the financial burden of these fines and the impact on small businesses, Gosselin doesn’t accept that they are victims in this scenario. Being noisy is not a right, it’s a nuisance, she says, and pleading ignorance of the law and shaking fists at “the man” isn’t very productive.

“Bobards was operating with the wrong noise permit for 21 years, and we all know that les Bobards is noisy — you can hear them from the park all the time. And in 21 years they only got one noise fine? I think they got off pretty easy.

“Now they say that if they can’t have live music they’re going to go belly up? But they have a bar licence, one of the most valuable things in Montreal, something people are scrambling to get, and they’ve turned into [a showbar] and want to keep doing it in the same space, and it’s everybody else’s fault that this is happening to them? Well, no, it’s their fault.”

Right now, Projet Montréal’s new permit is far from a reality, and neither are Stephen-Ong’s proposals. One thing that bars can do to keep their businesses alive and prevent conflict with neighbours and cops, Gosselin advises, is to read up on their rights and responsibilities. Projet Montréal has made guidelines available online (here), and has funded a new set of guidelines for would-be showbars, which is being prepared by the RSAQ.

Despite her criticism of the proprietors’ actions and attitudes, Gosselin is somewhat sympathetic to their plight because she recognizes the value of these bars and clubs, which have been key in the development of our music scene, not to mention great for the economy.

“We want more people to come and live downtown so they spend less time in their cars and there’s less pollution and more neighbourhood businesses,” she says, conceding that the notion of having one (and only one) show zone in the city, isolated from residences, is ludicrous. “It would just be a tourist destination that would become very sterile and artificial, which is kind of what the Quartier des Spectacles is now, but more so.

“One of the reasons why these smaller bars and clubs are so popular and have such a cachet is because they’re in a real neighbourhood with people living nearby, but then that creates an added burden of responsibility. It’s part of maturing as a society, though, working out rules of cohabitation, and there are solutions close at hand.”

Stephen-Ong agrees, and is eager to move forward with all factions working together. “I’m not trying to say that the Plateau should be nothing but noise all the time — absolutely not. This is simply about cohabitation between residents and the cultural scene.” ■