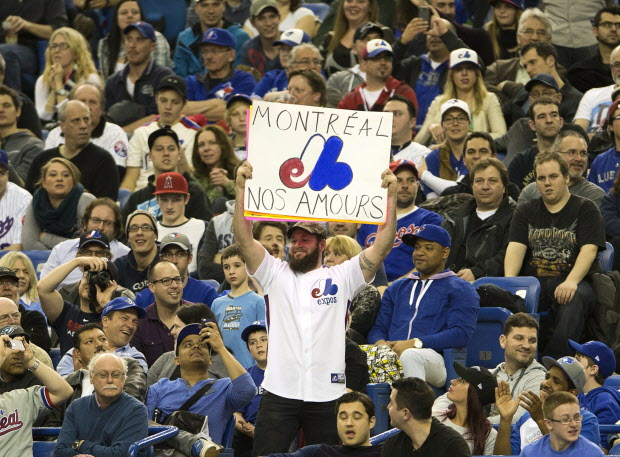 Major League Baseball’s return to Montreal after nearly a decade away was the talk of the town this weekend.

Over 95,000 tickets were sold to a pair of meaningless but surprisingly entertaining exhibition games between the Toronto Blue Jays and New York Mets on Friday and Saturday at the decaying Olympic Stadium. The real reason people showed up, though, was to demonstrate that Montrealers are no longer the bitter baseball fans who rejected the Expos during their final, mismanaged years, and to celebrate the team’s heady days, specifically the ’94 Expos team that would have won the World Series if not for a players’ strike, as well as catching icon Gary Carter.

Sitting in a dilapidated Big O with over 46,000 fellow baseball-starved fans on Friday did confirm one thing: that in the stages of grief over losing a team, we’ve all moved on from anger to nostalgia. Once the first pitch was thrown (the official one, not Mayor Denis Coderre’s bouncer to the plate), it also became clear that pro ball is one thing, and the Expos are another. We slammed our chairs and performed the wave like we were passionate about the results on the field, but it was all for show.

We were there because we wanted to prove a point about our city’s love for baseball. We succeeded. But spring training is over, and Major League Baseball’s 30 clubs, including those thieves in Washington (and Miami, while we’re at it) are beginning their 162-game season without us.

It was heartwarming to see the visiting former Expos, and reminiscing about the old days proved good for the soul. Having baseball in town for the weekend was also a reminder of just how far away we are from even seriously discussing bringing a team back. I left the Stade with a sense of pride, but knowing that was the only MLB game I’ll see in my hometown this season opened a very old wound.

For the first time since the Expos left in 2004, I have a shred of hope that baseball could eventually return to Montreal. That being said, I’ve also come to the realization that I shouldn’t hold my breath waiting for the day.

But until then, I’ll begrudgingly settle for an annual bad cover version of the real thing. ■