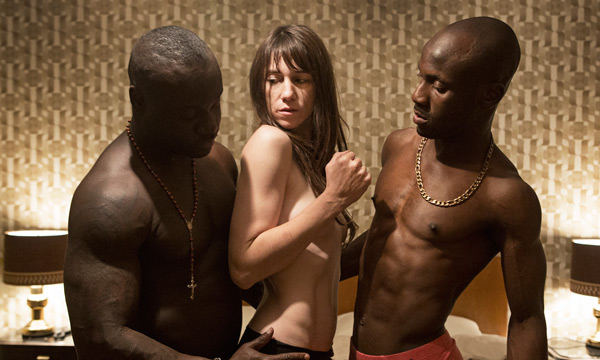 “I can’t stand Lars von Trier,” my friend told me. “I read an interview with him once where he said that cinema is a lower art form, so he’s punishing the audience for enjoying it.”

“Yeah, but I kind of like that about him,” I said.

That was before I saw Nymphomaniac.

His latest epic (released here in two parts) begins with a slow and subtle intro, a series of images showing snow falling in an alley. Then we see a woman’s body lying on the ground. It’s Charlotte Gainsbourg, appearing in her third von Trier film in a row, this time as the troubled Joe. She’s soon found by Seligman (Stellan Skarsgård), a kindly loner who takes her back to his place and nurses her back to health.

There, she tells him her whole life story, characterized by an extremely high sex drive and a disregard for honesty, other people’s feelings or, really, anything other than fulfilling her own desires. Her extensive sexual history is laid out in explicit, almost clinical style. It’s pretty grim (with the exception of one slightly funny scene in which two naked men argue on either side of Gainsbourg, their bouncing dongs framing her face) and generally not very sexy.

There’s not a lot to analyze in the film, as its themes and ideas are laid out as explicitly and matter-of-factly as the sex. Some will call it misogynist, and von Trier gives them plenty of ammunition. When people said that about Antichrist, I always thought that was like saying Starship Troopers is fascist — that is, it was a movie about misogyny. I still think he’s more of a misanthrope than a misogynist, but there’s no denying von Trier seems to have some weird fear of women’s sexuality. The thing is, a hypocritical repulsion-fascination with women isn’t really bringing anything new to the cultural conversation.

Gainsbourg is as intense a screen presence as always. Young Stacy Martin plays Joe for a good deal of the movie and is just as strong. Though it’s always nice to see Skarsgård onscreen, his character is underwritten, and a lot of the dialogue between him and Gainsbourg is pretty clunky. As for Shia LeBeouf, speaking in a British accent no less, the less said the better — though he’s no worse here than in most of his other movies.

Von Trier has always been capable of cinematic beauty when he’s not busy rubbing his audience’s faces in the dirt, and there are a few such moments here, but not enough to justify the interminable brutality. (To my mind, the film’s most outrageous element is the title at the beginning of each part, explaining that we’re about to see a censored and shortened version against the director’s will — as though what the four-hour movie needed was to be longer.)

From Breaking the Waves on, all of von Trier’s films have featured one or more scenes of an almost unbearable cruelty. Maybe it was just the mood I was in, but I felt like Nymphomaniac had too many such scenes to bear. At a certain point it gets emotionally numbing. Especially coming after Melancholia, which seemed to transcend von Trier’s sadistic viewer-bullying, it’s disappointing to see him fall back on his same old tricks. ■