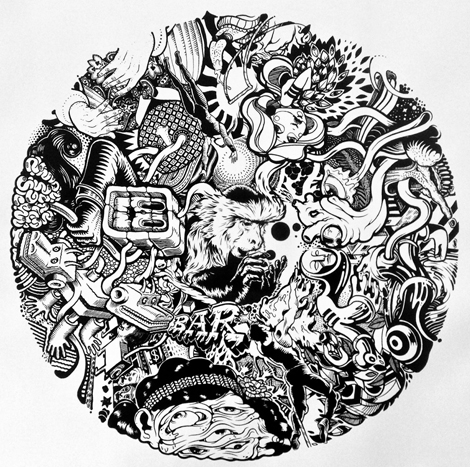 Five years ago, local artists Jason Botkin and Rupert Bottenberg launched a collaborative art project called En Masse.  Distinguishing their work from that of local predecessors like the Heavyweight collective, En Masse sticks to a strictly black and white palette,  but doesn’t place restrictions on what can constitute a canvas – much of their work has gone up on walls, but it’s also been seen on Canada Goose parkas.

Theirs isn’t a clandestine graffiti operation, but a series of works created for galleries or commissioned by corporate clients, from Montreal to the ROC to the U.S. to frickin’ China. If you’ve ever left your house, you’ve probably laid eyes on En Masse’s work, which has become ubiquitous in Montreal: on the street, on the inside of bars, in malls during Nuit Blanche and Art Souterrain, even in the Museum of Fine Arts. Despite being produced by a crew that’s always in flux, there’s a consistency that makes their work distinctive, and it’s not all about black and white and playful imagery.

Ahead of tomorrow’s vernissage for their new show Full Circle at Station 16, I spoke to Botkin about where En Masse’s magic comes from.

Lorraine Carpenter: This Station 16 show is an anniversary show, but it’s new work rather than a retrospective.

Jason Botkin: A retrospective? What’s that? We’re too young for a retrospective, and it’s so boring, too. Especially in this project, where the magic is, really, is in the process and not the final product. To show old paintings is cool, because we do have good old stuff, but it’s always more exciting to bring people together and have this infusion of collaborative madness and hilarity.

LC: Five years feels like a milestone, especially in this scene.

JB: This seems to be a nice number to celebrate as far as the project goes because I didn’t ever expect that it would’ve lived this long. Projects of this sort tend to have a pretty short shelf life.

We were talking about it last night as a group, actually: What is it about the scene here in Montreal that seems to defy strict clique-ism? There are communities, there are groups, there are politics in some of these groups — especially the graffiti community — but there are so many artists here that seem to straddle any community they want or defy boundaries of how their practice is defined.

That’s been a real advantage to us, in terms of growing a project that identifies itself as being without ego — or without the need to define itself according to street art, to the regulations of graffiti or whatever it is — and as a broad umbrella that can cover any territory.

We’ve only really started to explore what is possible in terms of how we address collaborative activity. Could it branch out into video art or music, or could we take the project into more abstract painting territory? Absolutely, and it should, and I think it can and will in the future. 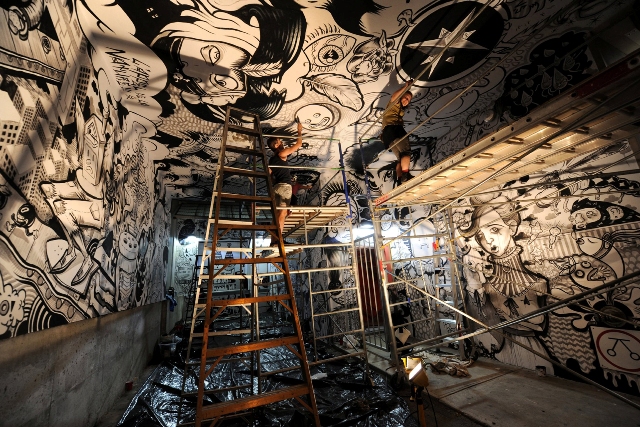 LC: It must have been difficult to diversify the way you have.

JB: We’re trying really hard to branch into different territories. It’s been our mandate from the beginning but it serves art enormously to be able to be very  flexible in our practice and explore different avenues of how you can move towards being a professional artist and how you can actually make a living at what you do. That means meeting new artists. It means creating a strong community. It means approaching the market and being careful with what kind of work you do with it and what kind of relationships can be forged with corporate clients, and also the responsibilities that we take as artists to communicate with a broader market.

LC: I’ve seen on social media that you guys have been working on the walls at Station 16 this week, and you’re having other artists fill in the holes in ring-shaped work that you’ve done on round canvases. How does that approach to the show reflect the En Masse story?

JB:  For this show it was really a chance to come together and create new works that are really tight, that are reflective of a group of people that have worked together on numerous projects with a maturing language of collaborative work, and then invite new people in and always keep that voice refreshed by bringing new voices to the mix. That way it really reflects what’s happened over the last five years. ■