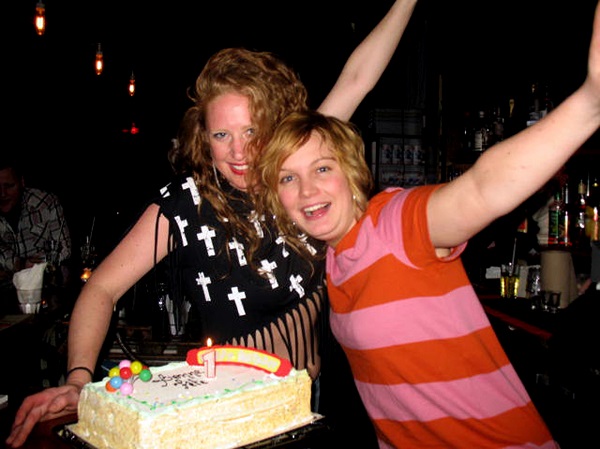 Blue Dog Motel’s weekly comedy night, There’s Something Funny Going On, will host its 100th show today, Monday, March 24. We had a chat with TSFGO co-director Emma Wilkie about the show’s history and what they’ve got planned for the big 1-0-0.

Kayla Marie Hillier: How did There’s Something Funny Going On start out?
Emma Wilkie: Rashta [Kruger] started it in the beginning of January 2012. I joined her a week later as her comedy liaison and we became a team.

KMH: What is it about There’s Something Funny Going On that makes it different than other Montreal comedy shows?
EW: For one, it started before there were a lot of other independent shows. And what really makes it different from a show at a café or a comedy club is it’s in a dive bar. And I want to emphasize that I use that term endearingly. We love that it’s there. It makes the atmosphere really fun and cozy and friendly.

Rashta and I make this show different. We’re pumped-up. I’m there to greet people, and the energy that Rashta has at the bar is awesome. We work hard to ensure that everyone has the most fun possible.

KMH: What do you look for when you’re choosing comics for the show?
EW: We always try to have a pretty equal mix between newer comics and more seasoned comics. On one hand it guarantees that the show is going to be a good comedy show, people will want to come back. And on the other hand, it gives comics who are starting out a stage to practice and to be among more experienced comics to kind of give them that confidence boost, to be able to be better at what they do. It’s a win-win.

KMH: What do you have planned for your 100th show?
EW: We are going to have festivities throughout the night. We’re probably going to have it catered with some treats provided by me and Rashta. On the bill we have Darren Henwood, Eman, Dan Derkson, myself, and headlining will be Mike Ward.

KMH: Do you ever tire of the show taking up your Monday nights?
EW: I would definitely miss it if it wasn’t there. I mean, it can be stressful at times—in the winter, trying to get people out—but I think we’ve only ever cancelled one show in the two years. The more work we put into it, it pays off directly. People show up and have a good time. It’s never stressful when it’s fun. ■

Their 100th show will be celebrated tonight, Monday, March 24.