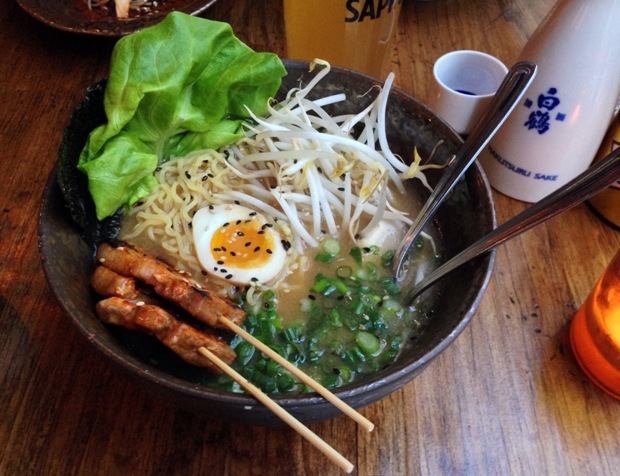 Japanese cuisine has never been Montreal’s forte. Presumably this has something to do with the miniscule size of our Japanese community, and the mainstreaming of Japan’s leading culinary export, sushi — there are probably as many Japanese-run sushi joints in this city as there are Jewish people cooking bagels .

The rise of the izakaya (bistro/resto-bar) was a slow one. Apart from this place on Parc, which beat the trend by nearly a decade, the influx began in the middle-late aughts with the opening of a few restaurants that put the focus on ramen — the novelty of eating a tasty soup containing actual vegetables and meat, as opposed to the sodium-packed poverty noodles available at your corner dep, was very appealing at a time when trendy restaurants were sprucing up whiter varieties of trashy “comfort food.”

There was Ramen-Ya and Imadake, then Big in Japan, then Kazu, the small establishment on Ste-Catherine W. that offers the most authentic slice of urban Japan that you’re going to find in the 514 — it’s not just the food, but the eccentric staff that brings the place to life, kind of like NDG breakfast joint Cosmos, but transplanted directly from Tokyo’s Harajuku district to downtown Montreal.

The problem with Kazu is that it’s tiny, and there’s almost always a line-up to get in. So it’s no wonder that more izakayas are meeting the new demand for Japanese food (that isn’t sushi) and drink.

Following the opening of Old Montreal’s Flyjin early last year, and Café Sardine’s nighttime Iwashi set-up, which began back in September, Biiru is the latest addition to the scene. It opened its doors on a strange downtown block (City Councillors, just north of Ste-Catherine) as recently as mid-February, though you may feel like they’ve been around longer — credit their marketing manager for a strong social-media tease.

When we visited Biiru for 5à7 last Friday, there was no line-up, but we’d made a reservation and the place filled up fast. The space seats about 40, with half a dozen bar spots, and tables for two pushed together for larger after-work groups, but its high ceilings alleviate the kind of claustrophobia that can set in at crowded restaurants. We started with a pint of citrus-infused Asahi (they’ve got Sapporo and Kirin, too), a refreshing counterpoint to the sake that we felt obliged to order — there was nothing wrong with the sake, mind you, but downing tiny cup after tiny cup of the stuff feels like hard drinking when the sun’s still up.

As the waitress explained the tapas-esque nature of the menu, we opted for a few items to share ($6, $7 and $8 a piece) and one that could constitute a stand-alone meal ($14): fried tofu, fried chicken, salmon & nori skewers, a soba noodle salad and a ramen miso soup with egg, greens and fried pork.

Many of the opening-night issues I read about on Chowhound seem to have been resolved: the fried  chicken came with a tart sauce and a small clump of céleri-rave, which gave the lightly fried bird the kick it needed, and the salmon & nori was dabbed with a thick, hoisin-esque sauce that lent it some necessary sweetness without erasing the fish flavour.

The soba salad was surprisingly good considering the odd combination of ingredients (bacon, cranberries and kim chi), and the soft tofu was without fault, but I wouldn’t call it exciting. The ramen miso soup had a winning set of flavours and consistencies — the light crunch of bean sprouts, green onion and lettuce, the tenderness of the noodles, shitaake and semi-hardboiled egg and the toothsome goodness of the fried pork — but the miso broth was mushroom-based, so be wary if you’re one of those fungi-averse people.

Though we had no regrets about skipping more familiar Japanese dishes (like sashimi and tempura), we felt that we’re just beginning to get to know Biiru’s menu, which isn’t even that vast. We’ll be back for a Japadog, a mushroom & cabbage pancake, cheesecake and fancy cocktails. ■

Vegetarian-friendly: No, but it’s doable for pescetarians.