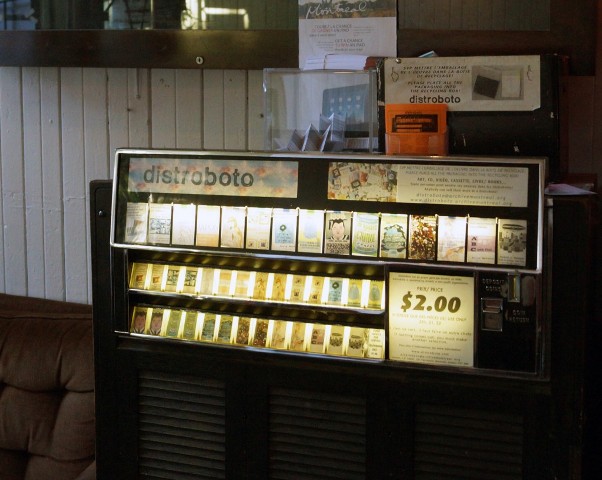 This month marks 15 years since Louis Rastelli and his friends, including local comics artist Julie Doucette and Monastiraki store owner Billy Mavreas, decided to do something with 1980s ephemera.

“At first, the ’80s were our concern. We started to realize that a lot of this stuff was just disappearing fast. So we decided to start up a formal organization, a non-profit, to at least attempt to do some sort of archiving,” says Rastelli.

Rastelli, a writer and local arts-community fixture, is Archive Montreal’s current manager and head of operations. After letting me gasp and sputter in front of a wall of Montreal Mirror archives, a pile of magazines called The Voice of Montreal (now known as Vice), a Martha Wainwright cassette demo and a 1711 hardcover bound issue of The Spectator, he revealed an entire room full of dysfunctional cigarette vending machines. These genius contraptions that belong to a bar-hopping past I wish I had been alive to experience are better known as the face of Archive Montreal’s side project: Distroboto.

Distroboto is a network of cigarette vending machines converted to sell tiny zines and other works of art (the approximate size of a cigarette pack). Rastelli and his friends at Archive Montreal started the project in 2001, spreading the machines throughout the city in bars and concert venues and other spaces where you might find young people looking for art. The same year, Distroboto was featured in The New York Times Magazine as one of the top “Ideas of the Year.”

“The original idea back in 2000 was to cut out the middleman and promote local arts directly to the public. A lot of bookstores and record stores that used to sell really good stuff went under and it was a frustrating time. When we started [Archive Montreal], it was to promote and preserve simultaneously, and the Distroboto machines are a big part of how we promote,” says Rastelli.

Distroboto is not the only aspect of the Archive’s mandate to publicize and document Montreal’s underground arts scene. In fact, readers may be more familiar with Archive Montreal as the team of masterminds we have to thank for Expozine— Montreal’s annual zine and small press fair.

Rastelli describes the relationship between the three projects of Archive Montreal: “Expozine is the big annual event where everybody gets together in one place and you meet the artists and stuff like that. Distroboto is many of those same artists year-round, just selling their stuff. And the archive side systematically keeps copies of stuff from Expozine and Distroboto. It’s a great formula.” ■