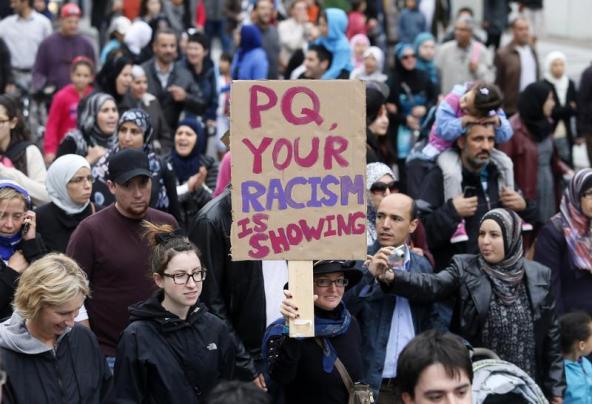 As we get ready to go to the polls April 7, racial tensions have increased in Quebec and the Parti Québécois’s “Charter of Values” is fostering anti-Muslim sentiment and targeting Muslim women.

That’s the opinion, at least, of most Quebecers according to the EKOS poll that CBC has been trotting out bit-by-bit over the last week.

And it’s not just anglophones and allophones who think that. The majority of francophones polled agree with the first statements, and 45 per cent agree with the last one.

How does one reconcile that with the CROP poll for La Presse, released on Monday, that suggests 68 per cent of francophone Quebecers and 21 per cent of non-francophones support the Charter?

The inescapable conclusion is that, for many Quebecers, increased racial tension, anti-Muslim sentiment and the targeting of Muslim women are perfectly acceptable consequences of the Charter.

Maybe there’s another way to spin this, but I don’t see it.

If you listen to radio call-in shows, read the comments on media websites or just listen to casual conversations about the Charter, another conclusion you’ll be forced to draw is that a lot of people don’t want a ban on hijabs to be limited to state employees alone.

Already, the PQ’s Bill 60 would have allowed the restriction of religious garb to be expanded beyond its initial target of the civil service, health and education sectors, and hundreds of government agencies. Article 10 of the temporarily-dead bill explicitly stated that such restrictions can also be applied to “any person or partnership with whom (a government or government-subsidized agency) has entered into a service contract or subsidy agreement.” So the company hired to clean the floors at the ministry of education building, for example, could be told that its employees are forbidden to wear hijabs.

The minister in charge of the Charter, Bernard Drainville, has also mentioned in several interviews that he hopes the private sector will follow the government’s example. That shifts the goal from state secularity to what’s really at the core of the Charter: restricting public displays of religious faith via economic threats aimed principally at Muslim women.

But that’s not xenophobic, they keep telling me, it’s just an affirmation of common Quebec values.

And now we know that the PQ plans on making this a key plank in the April 7 election that Premier Marois set in motion today.  The party’s ironic Six Million Dollar Man campaign slogan? “Plus fort, plus prospère, plus fier, plus accueillant.” (“Stronger, more prosperous, prouder, more welcoming.”)

If the Charter is the way we welcome newcomers, I’d hate to see how we say goodbye.

Feedback on last week’s column was overwhelming. It evidently struck a chord, with nearly 9,000 readers taking the time to click “Like” at the top of the page.

Of course, it wasn’t all fan mail. Some readers, for example, accused me of “threatening” to leave the province because of the Charter.

That’s not what I said, though. I wrote that the Charter was the reason why I was among the 50 per cent of non-francophones who, according to the EKOS poll, “are now seriously considering leaving.”

The debate has shown me “a Quebec I don’t recognize and,” I added, “if the Charter is adopted, one that I can no longer defend.”

I don’t see how that’s a threat to anyone except the people living in whatever town I might eventually move to.

For all of my adult life, I have made a conscious decision to stay in Quebec even though my poor written French considerably restricts job opportunities here.  I’m not complaining. Like hundreds of thousands of other anglophones and allophones, it was a trade-off I felt was worth it. It was easily offset by my love for this place, by the vibrant culture, by the often seamless interweaving of diverse languages and cultures, by that undefinable esprit that is Montreal, by my close friendships and family history. This was my one-and-only home.

Over the years, my French-language progress had in many ways mirrored that of the non-francophone community as a whole, going from virtual unilingualism to comfortable French fluency. As someone who learned the language late and “on the street,” though, I knew I was always destined to remain part of the audible minority and the grammatical illiterati.

But I didn’t care. I read La Presse and Le Journal, I watched Tout Le Monde en Parle, Infoman, LCN and les Canadiens on RDS. I even argued with semi-conscious drunks who had fallen on the sidewalk in front of my apartment — who looked down on me as I tried to help them stand up — about whether I could call myself Québécois when I was clearly “un anglais.”

I was chez moi and no one could take that from me.

Then came the Charter. Even though it didn’t affect me personally in the least, the debate it engendered exposed an underbelly of anger aimed at “les autres” that I kept hoping would shrink or go away. Instead, the bedaine grew larger and the lectures more pious. Some Charter advocates — people who don’t know Simone de Beauvoir from Simón Bolíva — were hoisting the flag of feminism for the first time in their lives, determined to tell Muslim women what to do, to take away their free choice in the name of a white-bread, Western vision of “freedom.”

After that, it has been hard for me to feel at home here anymore. Regardless of the eventual fate of the Charter — watered-down or reinforced, no doubt struck down by the courts — the debate has, as one of my critics described it, destroyed my “idealized vision” of Quebec. My vision of an open, inclusive, self-assured Quebec was pure self-deception, according to this Internet sage.

Ironically, a lot of so-called “angryphones” would agree.

So, no, I’m not threatening to leave. And I have absolutely no regrets about having chosen to live and work here for most of a lifetime.

But for the first time, like thousands and thousands of other Quebecers, neither will I regret leaving, if that’s what I decide to do. ■