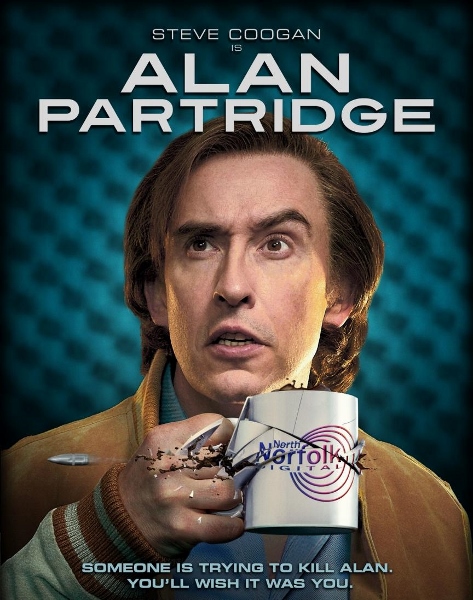 For over 20 years, Steve Coogan has been entertaining audiences (primarily in the U.K.) with the audacity and narcissism of his fictional media personality Alan Partridge. Canadians haven’t really had the opportunity to be introduced to the TV and radio presenter, unless they scoured the Internet for episodes of one his many TV shows (among them I’m Alan Partridge and Mid Morning Matters With Alan Partridge). But finally, a feature-length cinematic experience has arrived on our doorstep, giving us the gift of Partridge.

The film opens with a bit of turmoil: The small radio station where Partridge works (North Norfolk Digital) is being taken over by a conglomerate called Shape, and the new company wants to push out the older DJs to attract a younger, trendier crowd, putting Partridge and his colleagues’ jobs in jeopardy.

Very late in the game, Partridge realizes that he might actually get fired. So, in typical Partridge fashion, he offers up his co-worker Pat Farrell (Colm Meaney) and helps usher him into unemployment in order to save himself. Pat doesn’t take the news so well, brings his shotgun to work and decides to hold the entire office hostage. When the police show up, self-serving Partridge ends up being nominated to play Pat’s spokesperson and he immediately starts figuring out ways to use the traumatic hostage situation (that he created) for his own benefit.

I was worried at first that the premise would become somewhat tiresome and repetitive, but the writers have created the perfect scenario to showcase all the character flaws that Partridge fans love — including his epic cowardice, which results in one of the most ridiculous window escapes I’ve ever seen.

If you’d call yourself a Ron Burgundy fan, I suggest you watch this flick to see a master at work. ■