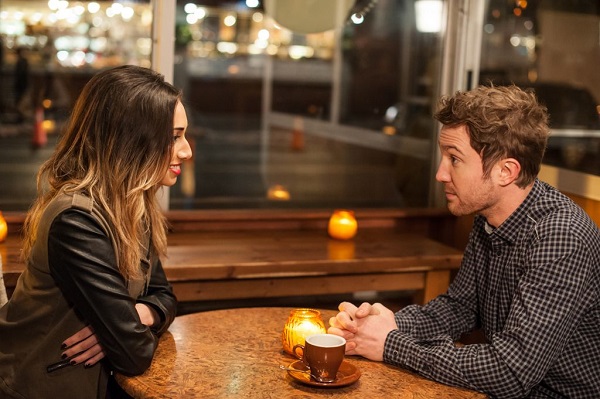 Local director Pat Kiely has managed to do something extraordinary with his first foray into the rom-com genre. He’s managed to write a clever, reflective and funny script that avoids stereotypes and clichés, resulting in a really refreshing take on relationship struggles and turmoil. Say it with me now: Bravo.

Three Night Stand stars Being Human cast members Sam Huntington and Montrealer Meaghan Rath as a married couple trying to reignite their slightly dimming flame. They leave the city for a romantic getaway to arrive at their ski lodge and realize that the husband’s ex (Emmanuelle Chriqui), who he still obsesses over, happens to run the place.

Last week I had a chat with Kiely—who you might know from the Kidnapper Films crew and their 2008 movie Who Is KK Downey?, which he co-directed, co-wrote and starred in—about Three Night Stand.

Kayla Marie Hillier: How long did you work on this movie?
Pat Kiely: It took two years from the start of writing the script until we went into production. Which actually, in the grand scheme of things, is kinda quick. It wasn’t one of those films that I’d been writing for 10 years or something, so I feel quite lucky about that. That said, it was still two years of really hitting the pavement. We never got a penny of development funding, so it was really just me working for free. The first people who came on board were SODEC and then Telefilm after that, which I just feel so lucky about. It’s so great to be in a province that prioritizes funding films that are author-driven, or that are different or new or genre-bending. So I feel really lucky to be an anglophone Quebecer and to have had those two funding bodies hop on board. It felt like a real gift.

KMH: What was it like writing/directing solo? Do you have a preference?
PK: It’s totally different. It’s definitely more nerve-wracking when you’re on your own, because when someone says that your movie is shit and you’ve worked with a group of people, you can kind of laugh it off. But if someone said that something that you wrote and directed on your own is terrible, it hurts a bit more.

KMH: How’d you come up with the idea for the plot?
PK: I was really drawing from things that were going on in my own life, things that were going on in my friends’ lives. A lot of the characters are based on people that I know or fractions of myself. That was really the springboard for the story. I wanted to write a romantic comedy, but I also didn’t want to follow formula. My goal as I was writing was to really just let the characters and who they were — the emotionality of them — dictate the story rather than any preconceived idea.

KMH: The film really does dive into some intimate relationship moments, and it manages to stay true to both sexes. Do you think this was something that you achieved because you were drawing from real stories?
PK: I love to talk about sex and relationships when I’m with my friends or out at lunch, so those are the things that have definitely informed it. I know people that have these problems and I’m always just fascinated by the trials and tribulations of sex and relationships, so I tried to bring some of that to the movie.

KMH: Rath’s your girlfriend in real life — did that make filming tricky at all?
PK: No, her and Sam were so professional and they have such a close relationship that they didn’t make it weird at all. Mostly I was just focusing on getting it in the can.

She was an executive producer on the film and was with me through the whole process: reading every draft, helping in terms of story, financing, and I think that’s why she’s so great in the film too, she really knew the character so well.

KMH: Are you already working on your next project?
PK: Yeah, I have a script that’s just ready to go and I’m trying to get financing for it. So I’m in the process of trying to convince everybody to get on board. This one is a wedding film about an anglophone family that goes to Quebec City for a weekend, for a wedding. I’m trying to get that one off the ground while releasing this one, so those are the two things that I’m juggling right now. ■