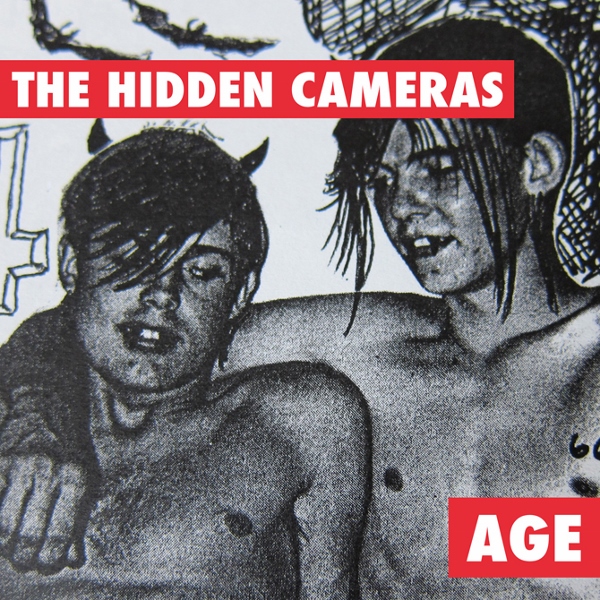 12 years in the making

Since 2001, Toronto collective the Hidden Cameras have crafted music and mounted shows that helped push Canadian indie pop onto the radars of music lovers around the world. In the early days, they defined their sound as “gay folk church music,” a tag that worked for and against them, but anyone who’s heard their records or witnessed them live — whether their early pagan dance parties or sprawling choral & orchestral spectacles (usually a Toronto-only affair) or the present core team of singer/guitarist Joel Gibb, guitarist Gentleman Reg, viola player Lief Mosbaugh and trumpet player Shaun Brodie — know that their aesthetic and their appeal can’t be confined to one category or one string of descriptors.

Ahead of this week’s show at Il Motore, I spoke to Gibb about the band’s new album, Age, and how “new” is relative.

Lorraine Carpenter: I know that “Gay Goth Scene” is an older track that you guys have been playing live almost since the beginning. Why was this the time to record and release it?

Joel Gibb: “Gay Goth Scene” was written like 12 years ago as a kind of experiment in writing a song in a minor key. So I quickly debuted that song in 2002, and then it sort of became a cult live favourite. We would bring it out on Halloween, or we’d bring it out on special occasions for certain things. I also recorded it a long time ago and didn’t really finish it until I got Mary Margaret O’Hara to do some vocals and stuff.

Most of the songs on the new record were written quite a long time ago, and a lot of the songs have a history like that. I’ve been wanting to make this record since I started writing songs, you know? I put these songs in a list and it was there to finish. I just took a while.

LC: Sounds more like making a mixtape of your own songs than the traditional band process.

JG: Yeah. Typically you write a record, then you record it and then you tour it. I didn’t really work like that. I always wrote songs all the time, and always thought of different album ideas.

LC: Why the title Age?

JG: It has a lot of associations. I wanted a short title. To me this is a coming of age record, and it also refers to the age we’re living in. It also took an age to make, so, you know.

LC: The recent video for “Gay Goth Scene” is so incredibly dark, and not in the way that the title would suggest. What was your role in the conception of that, and was the issue of bullying something that you associated with the song in the past?

JG: The song is about forbidden love and the lyrics are written from the perspective of a chastising parent. I wouldn’t say this song is about bullying, but the video [directed by Kai Stänicke] certainly is. I kinda like that the video adds a new narrative to the song.

LC: What’s next? Is there another record on the horizon?

JG: Yeah, actually. I was making Age and this next record simultaneously, so the next one is basically done. I still need to tweak a few songs and finish some mixes. To me, it’s like they’re odd, polar opposite companion pieces. This record is dark, it’s almost all in F minor, it’s about adolescence and the musical signifiers are, like, synthesizers and Echoplex delay machines, you know. And it’s sorta deconstructing the musical taste of my adolescence. The new record’s got pedal steel and banjo, you could say it’s almost rootsy, looking back to the idea of Canadiana. Like, there’s a Wade Hemsworh cover on it that Mary Margaret [O’Hara] and Feist and Rufus Wainwright sing on. It’s got a lot of great Canadian guests, like Ron Sexsmith and Afie [Jurvanen] from Bahamas. It’s a sweet record, it’s tender, it’s influenced by, you know, country and roots music and folk music, and there’s no synthesizers at all, in fact it’s all acoustic instruments. That will come out next year — it’s ready. I hope you’ll dig that one, too. ■

We spoke to the founders of the organization that curated Montreal’s Black Lives Matter street mural.