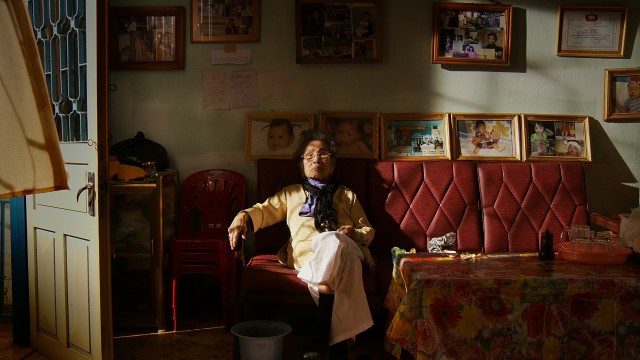 Local director Khoa Lê’s documentary Bà nôi is a lesson in observation. Through chronicling his trip to visit family in Vietnam, Lê explores his history by observing his grandmother, participating in ceremonies and discussing his past.

The film weaves conversation, ceremony and portraits together, poetically capturing this sense of filial responsibility, history and identity.

I caught up with Lê earlier this week to discuss the film, his relationship with his grandmother and his future projects.

Kayla Marie Hillier: How did the idea to make the film come about and why was it important to you? Was it something you set out to do prior to arriving in Vietnam?
Khoa Lê: I’ve always loved observing my grandmother. When I was younger I used to film and take pictures of her during my visits to Vietnam. Looking back, I think it was a way for me to stay connected with my birthplace and to keep my relationship with my grandmother alive. Even if we only saw each other every three years, I maintained a very intimate relationship with her.

The film was conceived above all from a desire to better grasp my family’s history, and in doing so, my own. At first, I wanted to delve into ideas of filiation and of personal memories through a work of fiction, but I realized that this goal might be better accomplished by reflecting upon the link between my grandmother and I.

KMH: Was it difficult to get your family to agree to be filmed?
KL: It wasn’t difficult because I was already very close to my family in Vietnam. I didn’t have to convince them because it wasn’t my first time filming them. And in any case, nobody would ever refuse me anything in Vietnam because I’m the baby of the family.

KMH: Your grandmother puts a lot of pressure on you to get married and to continue the family line, not to mention suggesting you choose your mate based on your culture — do you struggle with this? Do you think that this battle between your roots and the culture that you currently live in is pretty common?
KL: As I’m physically disconnected from them, this pressure isn’t so present, but it definitely does haunt me. It also isn’t something new. It’s often been mentioned to me ever since I was very little, since I’m the only boy of the family. It’s become almost commonplace, but I have to admit that it does haunt me regardless. The advantage for those like me who live here is that we have the choice to reject our culture of origin if it seems right to us. Essentially, I can choose to be Vietnamese when I feel like it. If I had been physically closer to my Vietnamese culture, I believe this mentality would have placed a greater pressure on me.

I don’t consider myself any more Québécois than Vietnamese. I am me. My identity is singular and unique. We are all as such. I strongly believe our identity is shaped by the encounters and stories that run through our lives. We all carry in us this fusion of horizons, whether we are immigrants or not. The rest is simply a problem tied to a feeling of belonging.

KMH: The use of the answering machine messages throughout the film was really clever — how did that come about?
KL: I wanted to show Montreal, and the Khoa here in Montreal, yet I also didn’t want to showcase that. It’s funny, I always had trouble thinking of scenes to visually portray Montreal, but when it came to Vietnam, everything came naturally. I thus decided to depict my western identity through sound. The idea of the voicemail messages came to me during the editing process. I had to find a way to show who I am here, without giving it all away — that would have been boring and explicit. The messages were a way for me to sneak that part of myself into the film without placing myself at the heart of it. It was out of the question to use an introspective voice-over. But it may also have been a subconscious way to protect myself, to hide myself behind the messages. Who knows.

KMH: What can we look forward to in the future from you?
KL: When I’m not practising for La Voix in the shower, I’m actually quite busy working on two new feature-length films. It’s still too soon to give away too much but I can tell you that the first one is a documentary essay and the other is a live action film. ■

Bà nôi is in theatres now