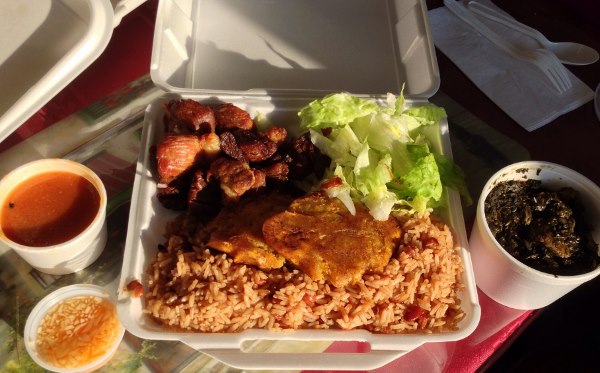 The griot plate at Patisserie l’Irréductible

There’s a good chance you’ve never been to Montreal North before.

I was born on the island of Montreal and raised here, and even I can only recall trekking north of the 40 a couple of times, for the odd youth sporting event. And I had certainly never eaten there. Although you wouldn’t know it by consulting Yelp or the culinary blogs, it stands to reason there are plenty of great places to eat in this sprawling borough where Coderre is king, architecturally striking neo-churches thrive and pretty much every possible ethnic community feels accounted for. The values charter was written by people who are scared shitless of this place, which is reason enough for wanting to get to know it better.

We didn’t really know where to go for primo Montreal North eats, so instead of consulting the web, we relied on word of mouth and by driving up and down the main arteries: St-Michel, Henri-Bourassa and Pie-IX. Our mission wasn’t so much to find the best or fanciest hidden gems, but to simply find something different from the norm.

Obviously, our first mission on this culinary expedition was to find authentic Haitian food. We hit up Patisserie l’Irréductible (8501 St-Michel), located in a tiny dep-style strip mall, and a quick trip via the northbound 67. The unassuming cake shop was recommended by the singer of a certain local band who might know a thing or two about Haitian food. Like most of the places I and my dining companions visited, the owners of these places greeted us with looks of slight curiosity, followed by excitement upon the realization that we weren’t in the wrong place, before ending with a shrug when we whipped out our phones to document the experience. Working at l’Irréductible was a short Haitian mom-type, and despite the menu posted on the wall, we were directed to the warmed trays of meat and rice on display. We ate griot, which is chunks of fried pork marinated to perfection. The outside was caramelized and packed with sweet and salty flavours, while the meat inside was tender. It came served with rice and fried plantains shaped like little pancakes. It’s mainly a takeout place, so we ate the ad-hoc brunch out of styrofoam containers on one of the restaurant’s two tables.

Next up, we visited Sultan Doner Kebab (4707 Charleroi), which I was hoping would serve doner kebabs in the same manner as they do in Berlin. For the uninitiated, in Berlin the doner kebab is everywhere, and they all serve them pretty much the same way: an entire salad stuffed into a thick, envelope-style pita bread, with a choice of three different sauces and the doner (typically lamb) meat, shaved into paper thin slices with a buzzing electric razor. Sultan did not prepare the doner kebab in that manner, but their pita meat was still slightly different than what you might get from a downtown spit. Less spiced, bigger pieces.

As per a recommendation on Twitter from local electronic music producer Smoked Meat Fax Machine, we visited mom and pop Italian joint Granada Pizzeria (4668 Charleroi) for what we were hoping would be a thick slice. Montreal, as we all know, isn’t much of a pizza town, outside of the spice-bombed Greek spots and the odd formal Neapolitan. Granada had a big oven, but the pizza was wasn’t quite the sum of its parts, and served as personal whole pizzas rather than as oversized slices. They didn’t skimp on the cheese, and the bacon topping was actually whole slices.

Another lunch consisted of Dominican food at Merengue (9289 St-Michel). Not unlike the Haitian dishes we ate, this meal was heavy on pork, rice, beans and plantains, and we washed it all down with Inca Cola. Be sure to go there on Sunday for pupusa, an El Salvadoran dish that consists of a thick corn flour tortilla stuffed with beans and cheese. Merengue was also where I participated in a successful trilingual conversation: primarily in Spanish, with a few English and French words tossed in.

We skipped one of the oldest Dic Ann’s in operation (10910 Pie-IX), as well as Cabaret Chez Mado (10181 Pie-IX), likely the most adorable looking shack of a strip club ever. To our complete surprise, we discovered another Vieux Montréal Pool Room (4848 Henri-Bourassa). We were unable to extract much info from the owner, an Eastern European living in NDG, except that the place has been open for about eight years. When asked about its affiliation with the Pool Rooms on Lower Main and Rachel E., he simply replied that all the owners “talk to each other.” Although the Hygrade and Lesters logos and the traditional plastic casse-croûte dining tables (where the chairs are attached to the table) were positive signs, the fries were bland crosses between normal fries and those door-stop Greek ones. The “all-dress” steamés were acceptably gooey. ■